"Satisfaction lies in the effort, not in the attainment, full effort is full victory." ~Mahatma Ghandi

We are seeing glimpses of fall headed our way.  Some leaves on certain types of trees are hinting at different hues of red and orange.  The temperature took a drastic dive dipping from 81 to 61 overnight.  Our clothing changed from shorts to pants.  Even the wildlife we typically see running around in our backyard are relaxing more. 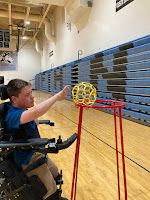 Cam has learned to advocate for himself more and more the older he has become.  This week, he arrived home after school one day and explained that in P.E. class, he was just sitting on the sideline and not really feeling involved.  After an email and open communication, the equipment he had used in middle school was found at the high school and he was back in business, exercising with his classmates. 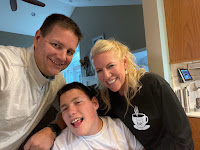 On Friday evening, we were working on the Brody's Be Café upcoming
fundraiser event.  Cam successfully navigated both of his parents handling separate activities.  To celebrate the end the week, we dined at our local Cascade Roadhouse and sat in the outdoor area since the weather was still mild. 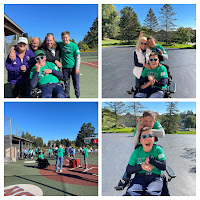 Saturday was a double-activity day for Cam.  First up was the West Michigan Miracle League baseball game.  Brody was dropped off at our house in the morning and rode with us to Rockford.  The boys were paired up with volunteers from the Hope College SIBS sorority.  Victoria and Kinsey were Cam's buddies.  As an added bonus, some elementary school teachers arrived to watch their former students play.  Ms. Barbara taught Cam and Brody for K-2nd grade and Ms. Kathy was their teacher for 3rd-4th grade.  They didn't even check with each other about attending a game and both were there on the same day!  It's important to note both Ms. Barbara and Ms. Kathy hold a very special place in our hearts as they continue to keep up with the boys year after year. 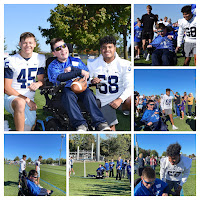 Brody's mom grabbed lunch for the boys and picked up her son.  Our family had a couple hours of relaxation before heading over to the South Christian football field for event number two. 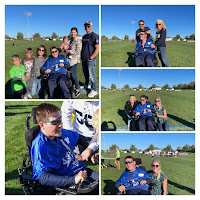 Victory Day is the day when South Christian players, coaches and cheerleaders team up to work with special needs children and adults, giving the participants a chance to score a touchdown against the Sailors. A professional announcer calls the play-by-play as the participants head down the field and they have their name announced for the touchdown.  Cam was paired up with two seniors Jake and Josh.  Jake was reassigned to another player and Josh became the main dude hanging out with Cam.  Josh talked Cam through the plays and it was so cool to see them chatting.  Josh told us he was heading to Calvin University for pre-med next year. 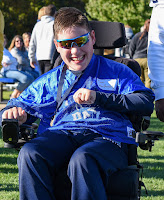 The bleacher stands were full of fans and supporters and the marching band played from the sidelines. Ms. Amanda, her friend Laura and Ms. Amanda's extended fam through her husband were all there as well.  Ms. Mary, Ms. Brooke, her husband and kids were cheering just as loudly as anyone else.  Cam was super excited to see them all!

After each person had scored their touchdown or cheered, a medal was presented individually to all of the players.  The weather couldn't have been better and clearly the warm sunshine was a victory as well!  After all of the festivities, we treated our football player to dinner out at Peppino's. In a rare occasion, our family experienced restaurant meals two days in a row.  Sunday was a movie day and relaxation as Cam and his mom watched two movies they'd never seen, but shared the name title: "Yours, Mine and Ours" released in 1968 and 2005.  Both were entertaining and Cam especially liked the kids and all of their antics.

One morning this week, Chris informed Jane and Cam that he had actually gotten up one hour earlier than he needed to by accident. As he told the story and we were all laughing, Cam said,
"Ha! A day in the life of Dad."
Posted by Special Moms at 3:13 PM