"We will be friends until forever, just you wait and see." ~ Winnie the Pooh 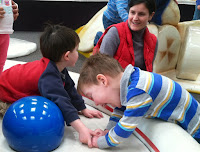 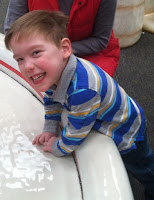 President's Day is a day intended to honor all American Presidents, and to possibly have the day off of school.

Since Cameron didn't have school, Jane and Auntie Jo decided it was a perfect excuse for a play date at the mall. The Woodland Mall offers a play area with "over-sized" breakfast items.
Cam and Will thought the big blueberries in the large cere 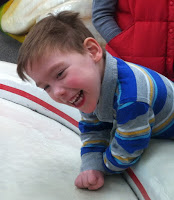 al bowl were funny because they felt squishy. The waffle with butter on top was fun to sit on too.

Auntie Jo, Katherine and Jane had no idea the play area would have so many kids, but quickly fi 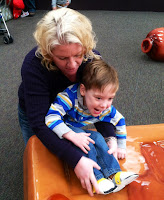 gured out that many kids also didn't have school that day. A sweet little girl was a little smitten with Cam, giving him his straw cup to take a drink, saying hi to him multiple times and even placing her own drink in his stroller pocket! Both Cam and Will had lots of laughs that day. 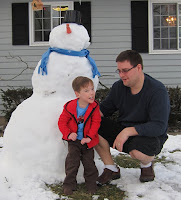 After a delicious lunch at Olga's, there were two boys who were pretty worn out.

Over the weekend, enough snow fell for a snowman to be built across the street. Almost as quickly as the new snow appeared, it began to melt. Maybe spring is around the corner? Someone thinks so, as shown by the modeling of shorts in February.
Posted by Chris Weatherford at 9:19 AM No comments: 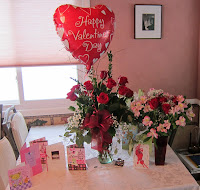 s just a word until someone comes along and gives it meaning.”

Cameron and Chris both gave Jane some

beautiful flowers for Valentine's Day. Cam even gave his nanny, Katherine, a bouquet of flowers.
A delicious family dinner was a great way to celebrate the heartfelt holiday.

It was a busy week and unfortunately, everyone ended up with the sniffles.

The weekend, however, seemed to perk Cam up a bit. Most Saturday mornings consist of two of Cameron's favorites- pancakes and trains! Chris is always devising new locomotive layouts for he and Cam to set up.

No better way to start off the day then with a short stack, or rather, tall stack of pancakes! The tough

decision becomes whether to pour homemade strawberry jam or syrup on the breakfast treat.
Luckily for Cam, he is not a picky eater when it comes to anything sweet...a trait acquired from both of his parents!
Posted by Chris Weatherford at 1:36 PM No comments:

Chris did such a great job of "hiding" Elmo Monday evening, one last picture had t

Cameron's school sponsors many events and one of our favorites is a dinner held at school with your child- one night with Dad and one night with Mom. This week was the "Dinner with Dad" evening. Chris and Cam attended the function.

The boys dined on yummy cheese pizza and oranges.

The gym area was also open and Cam enjoyed swinging and playing in the rolling tube.

Additional buddy time was available with

Will over the weekend. The Thomas train set was in full steam mode as the boys played with the locomotives and other various toys.

Both Cam and Will ate a great dinner, leaving their moms to assume that they were trying to make each other look good.

This week was also filled with great sadness, however.
Cam's sweet Aunt Tracy passed a

way unexpectedly. She adored her nephew and at every opportunity, gave him kisses and told him how 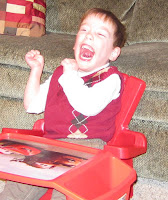 wonderful he was! One of Tracy's favorite quotes: "Whatever you vividly imagine, ardently desire, sincerely believe, and enthusiastically act upon must inevitably come to pass." This was Tracy's wish for Cam. We will all miss her very much...
Posted by Chris Weatherford at 8:24 PM 1 comment:

Some you may remember the famous "Where's Waldo?" books and games.

The goal of finding Waldo in a sea of people or things required an "I Spy" type of skill.

A similar challenge is held in the Weatherford household every evening.
At bedtime, Cameron has to find where Elmo is hiding.

As you can imagine, we find Elmo hiding everywhere...he's been kn

own to hang out in bathtub, behind curtains, under covers, even up on the ceiling!

One night, Elmo was perched on top of the bathroom door. When Cam went on his search and pushed open the door, who came cr

Cam giggles in anticipation of the Elmo search...while looking in each area he answers yes or no if he sees Elmo. Of course, when he does finally find Elmo, he practically squeals!

The video below doesn't begin to depict how loud and vocal he's been at times...enjoy.


Posted by Chris Weatherford at 9:46 PM No comments: