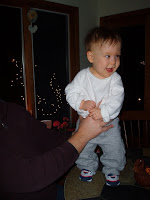 Cameron had to put away his shorts this week and didn't seem to miss the sunshine in Arizona quite as much as his parents did. He did, however, seem to forget about that time difference for a couple of days, but then settled back into his sleeping routine.
It was a short work week with the Thanksgiving holiday and Cam, Chris and Jane ventured up 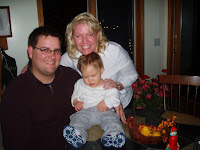 north to Aunt Joyce & Uncle Joe's for turkey day. Cameron had a fun day with everyone and saw his first Christmas tree of the season with pretty lights. His favorite part of Thanksgiving, of course, was eating the yummy sweet potatoes that his Auntie Gay made especially for him! Luck 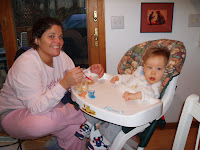 ily for Cam, Annie was more than happy to feed them to him.
After watching a beautiful sunset and eating some tasty ice cream and pumpkin pie, the family headed back to Grand Rapids. 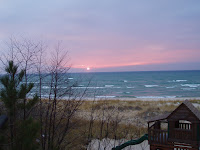 Cam spent the weekend playing with toys, practicing sitting up, and giggling away.
Saturday evening w 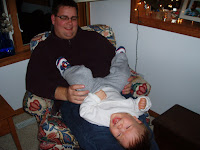 as a special treat for him because 'Big Sis' Lauren, her boyfriend John, and 'Big Bro' Greg stopped by to see Cameron before he went off to bed. They couldn't believe how much he had changed and he gave them all a big smile and a little giggle.
Hope everyone had a safe and happy Thanksgiving!
Posted by Chris Weatherford at 8:08 PM No comments: 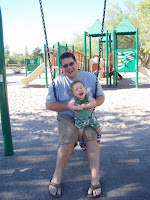 What a wonderful week the family had in Scottsdale, Arizona! Cameron was the model traveler- a few nearby passengers on the flights commented that he was so well-behaved. The week was full of gorgeous weather and fun activities... 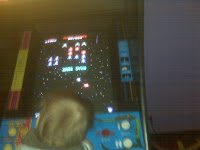 An arcade trip included Cameron's first game of Asteroids- Chris was positive that he beat Jane's high score...
Grandma & Grandpa accompanied Chris, Cam, Great-Grandma Mary and Henry to the Botanical Gardens where Cam saw the Chilluly Glass.
A little swim in a cool hot tub was a highlight for the big boy.

Cameron loves to splash around.
Chris & Jane had a big hiking trek up Squaw Peak with Henry, while Cam stayed with Grandma & Grandpa. 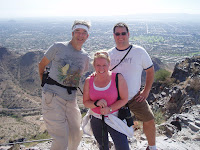 In a few years, they will definitely be taking Cameron on an Arizona hiking trip.

To finish up the great week, a mini family reunion was held at the rental house. Cameron met his second cousin, Ava, fo

r the first time. She is almost 2 years old and was quite fascinated with Cam and his toys.
Many thanks to Grandma & Grandpa for their babysitting time! It was wonderful to be together with all of the families in the beautiful, warm sunshine...
Posted by Chris Weatherford at 10:08 PM No comments: 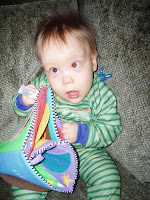 It was a very busy fall week trying to wrap things up before the Weatherford family heads off for vacation...
Cameron continues to practice his sitting and loves to play with his cloth book.
His schedule seems to be falling into place and he continues to try new foods, including Jane's favorite- cottage cheese and applesauce. Of course, he loved it! The secret is Grandma's homemade apples 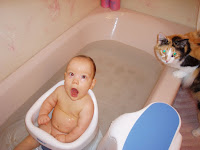 auce- that's the only way it tastes good.
Cam still loves to take a bath and maybe one of these days, Stella will jump in too! 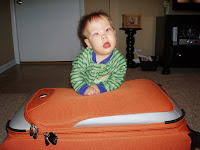 Sunday was the big day! Cameron embarked on his second airplane ride- this time to Arizona!
Stayed tuned for next week's posting to hear all about it...
Posted by Chris Weatherford at 9:30 PM No comments: 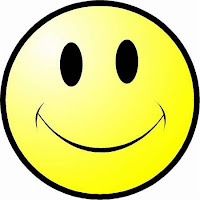 The week started off with Cameron's nanny, Anne, able to work again after her back injury- welcome back Annie! Cam was so happy to see her. 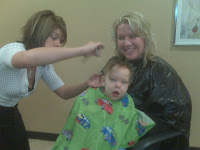 Tuesday was another 1st for Cameron- after work, Chris & Jane took Cam to get his very first haircut at Design One! He sat on Jane's lap, while Mandy expertly trimmed his fine hair. (In fact, she's so fast you can't even see her scissors in this picture!) He was such a good boy and gave the salon girls some big smiles when he was all done.
On Friday, Cameron went over to Fresh Market with Grandma & Jane. They had holiday food samples. Cam decided that the turkey and stuffing were pretty good, but then he tasted what may be his favorite dessert of all- Sweet Potato Pie! He kept s 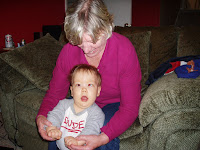 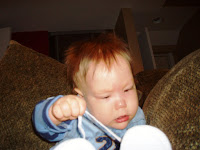 Imagine his surprise to taste his favorite veggie in an after-dinner delight!
Cameron's latest hobby is to untie his shoes. Doesn't he look intent on completing the task? 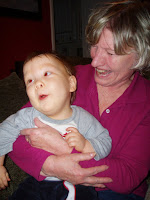 His favorite sound this week seems to be "ohhhh" which he is demonstrating here with Grandma.
Cam noticed the first snowflakes of the season falling on Sunday morning. It's hard to believe that more of those are just around the corner- Stay Warm everyone!!
Posted by Chris Weatherford at 10:03 PM No comments: 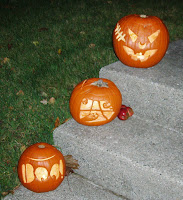 It was a fun-filled week for Cameron...his regular nanny, Anne, had a back injury, so her parents, Cam's aunt & uncle, came to stay with him on Tuesday! They had lots of fun playing and reading books. Uncle Joe was very pleased to see Cam wearing his Phillies jersey since they were only a half game away from winning the World Series! Thanks so much Aunt Joyce & Uncle Joe!!
For the remainder of the week, Cameron & Grandma h 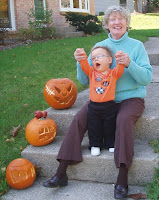 ung out together and spent lots of quality time together. Thanks so much for spending half the week with us Grandma!! Cam loved taking walks with you and seeing the pumpkins that he watched his Dad carve so expertly!

Finally, on Friday, it was time to dress up for Halloween.
Cameron had a late nap, so Jane had to wake him up to go over to Chris' work where they have family trick-or-treating at everyone's desks! 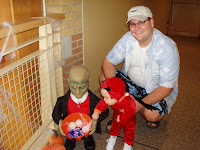 Chris dressed for Halloween too- he went as "Chris on Vacation." What a relaxing costume!
Cam had fun seeing other kids and his Dad's co-workers. However, he did try to steal some candy from this scary guy!!

Back at home, Cameron had to dress up as a Phillies fan since they won the World Series!! He 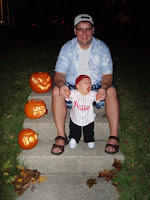 greeted the neighbors outside since it was such a nice evening. 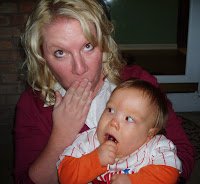 Cam also had his very first taste of a sucker- hmmm, do you think he may have a sweet tooth? Please don't let the dentist know!
Hope everyone had a safe and happy Halloween!!
Posted by Chris Weatherford at 8:48 PM No comments: