Each and every day we can find something to be thankful for.  It's seems fitting to have an occasion set aside to celebrate giving thanks.

Oma and Opa arrived the day before Thanksgiving all set to spend two nights with their grandson.
Oma is the best baker we know (we may be just a bit biased) and Cam thoroughly enjoys helping her and learning the process.  This year, the consensus was to make mini pies instead of full-size desserts.  The choices- strawberry cheesecake or apple pie- and of course, one could choose both. We were happy to have Ms. Ann join us since she is extended family! 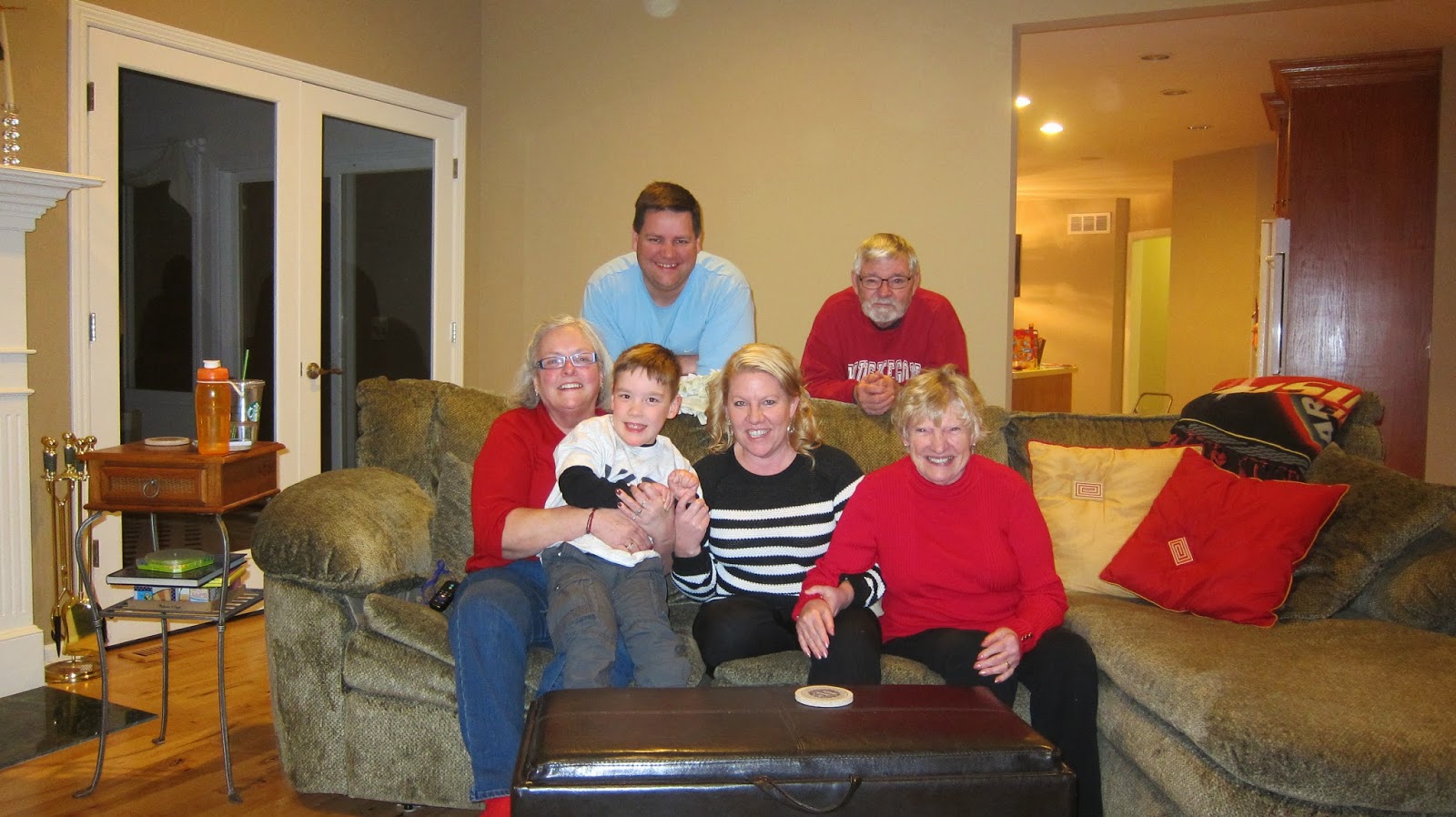 Before we enjoyed a delicious meal, each person had to say what they were thankful for.  When it was Cam's turn, this patient boy who'd been staring at the delicious array of food, said he was thankful for...bread!  When we all laughed, we asked if there was anything else he was thankful for, and he responded with "butter."  We all agreed these were very appropriate choices! 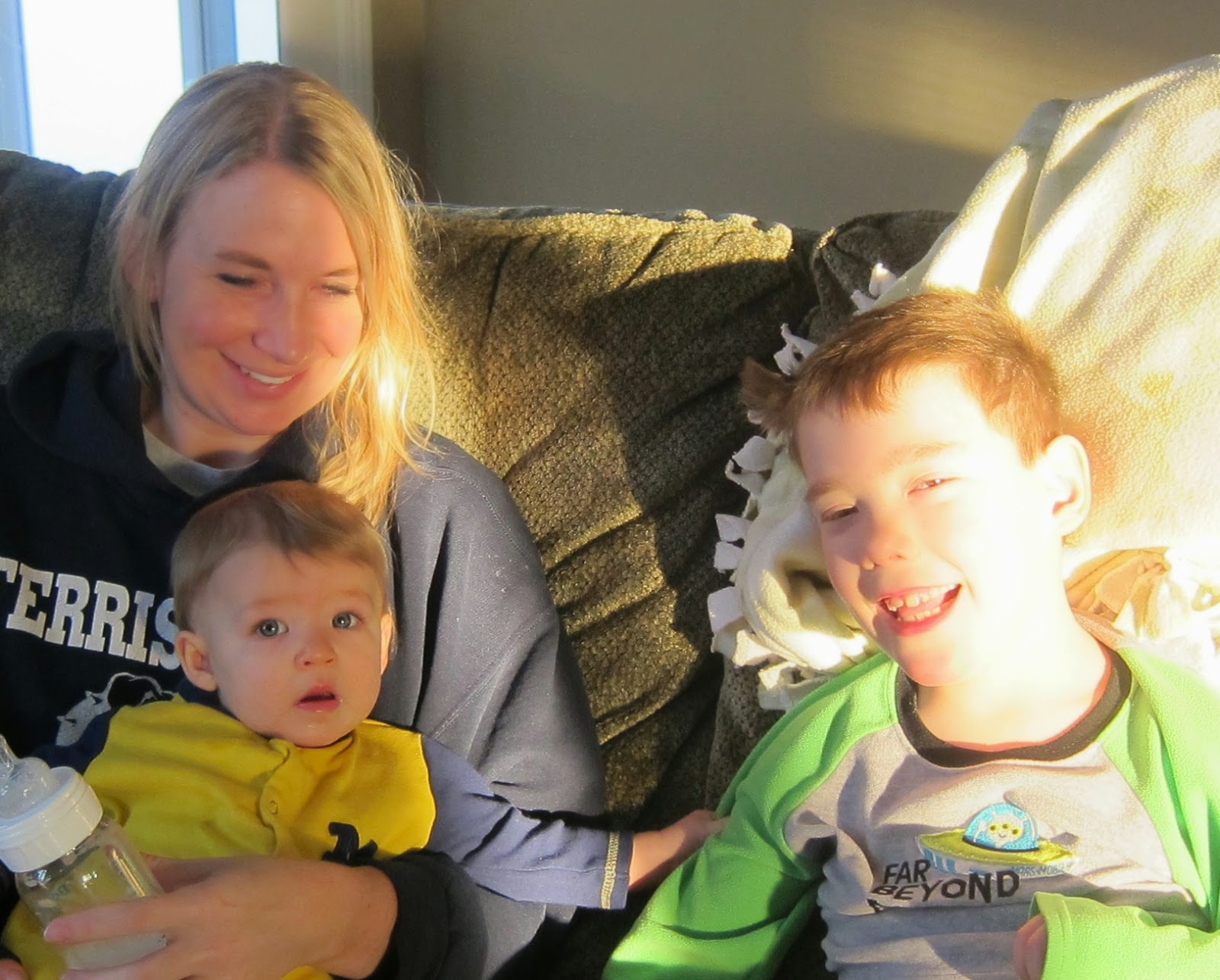 On Friday, we happily welcomed 'Auntie Amanda' and her sweet ten-month old daughter, Sally.  They arrived in Grand Rapids ready to hang out and have some pro pics taken downtown.  The weather was especially cold that day, but the pictures were fun.  Watch for next week's post to see our favorites.  Amanda and Sally spent the night and truly, we don't think we've ever seen a baby sleep so well and be so content in a new place.  Cam loved playing with her and when they had to leave early on Saturday, he kept asking Jane throughout the day, "where's Sally?" 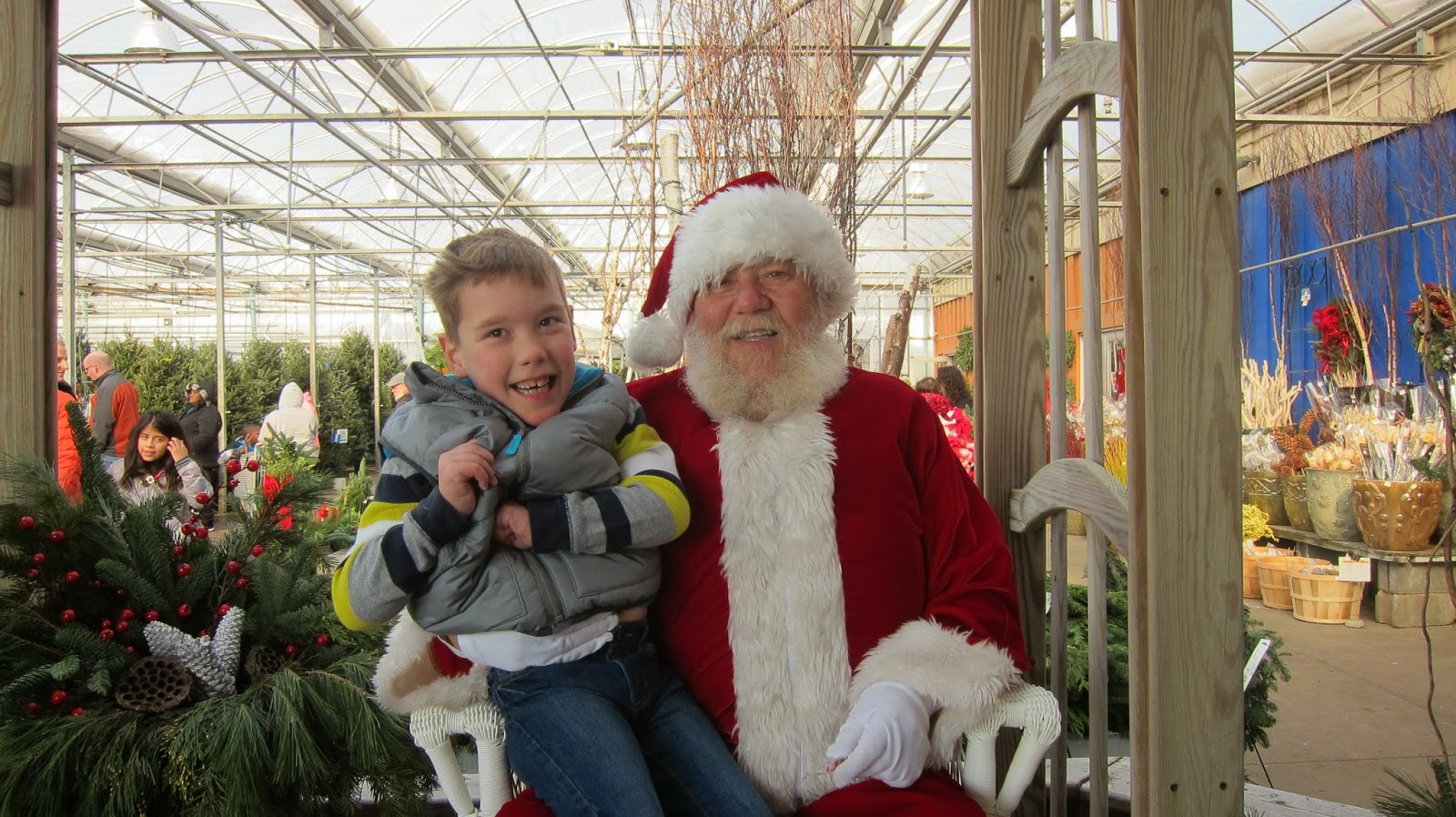 To make up for the loss of a playmate, we took Cam over to Fruitbasket Flowerland to see Santa and a couple of real reindeer!  The sun was actually shining and the immense amount of snow we received the week before had all vanished.
Cam thought the reindeer were pretty cool, but he was especially excited to see Santa for the first time this year!

We certainly are most thankful for all of you reading this blog!!  Hope everyone had a great turkey day!
Posted by Special Moms at 11:23 PM No comments: 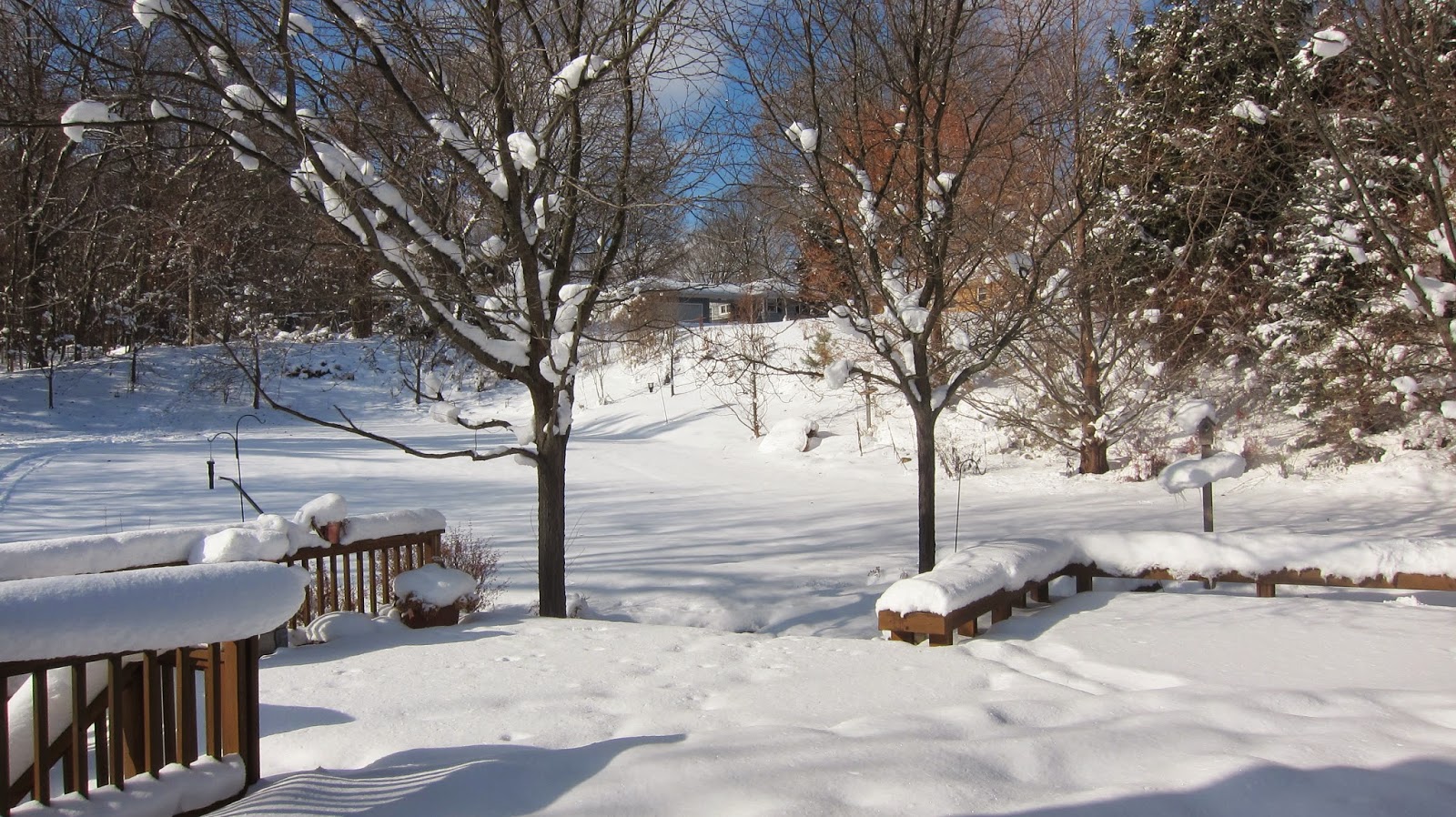 A big surprise this week came in the form of two snow days for Cam!  For someone who enjoys school so much, being home unexpectedly on a weekday was not in the game plan.  And since it was still a bit early for 20+ inches of snowfall, Cam didn't even have his new snow pants for the season.   So, we filled the days with games and activities inside as well as some neighborly visits. 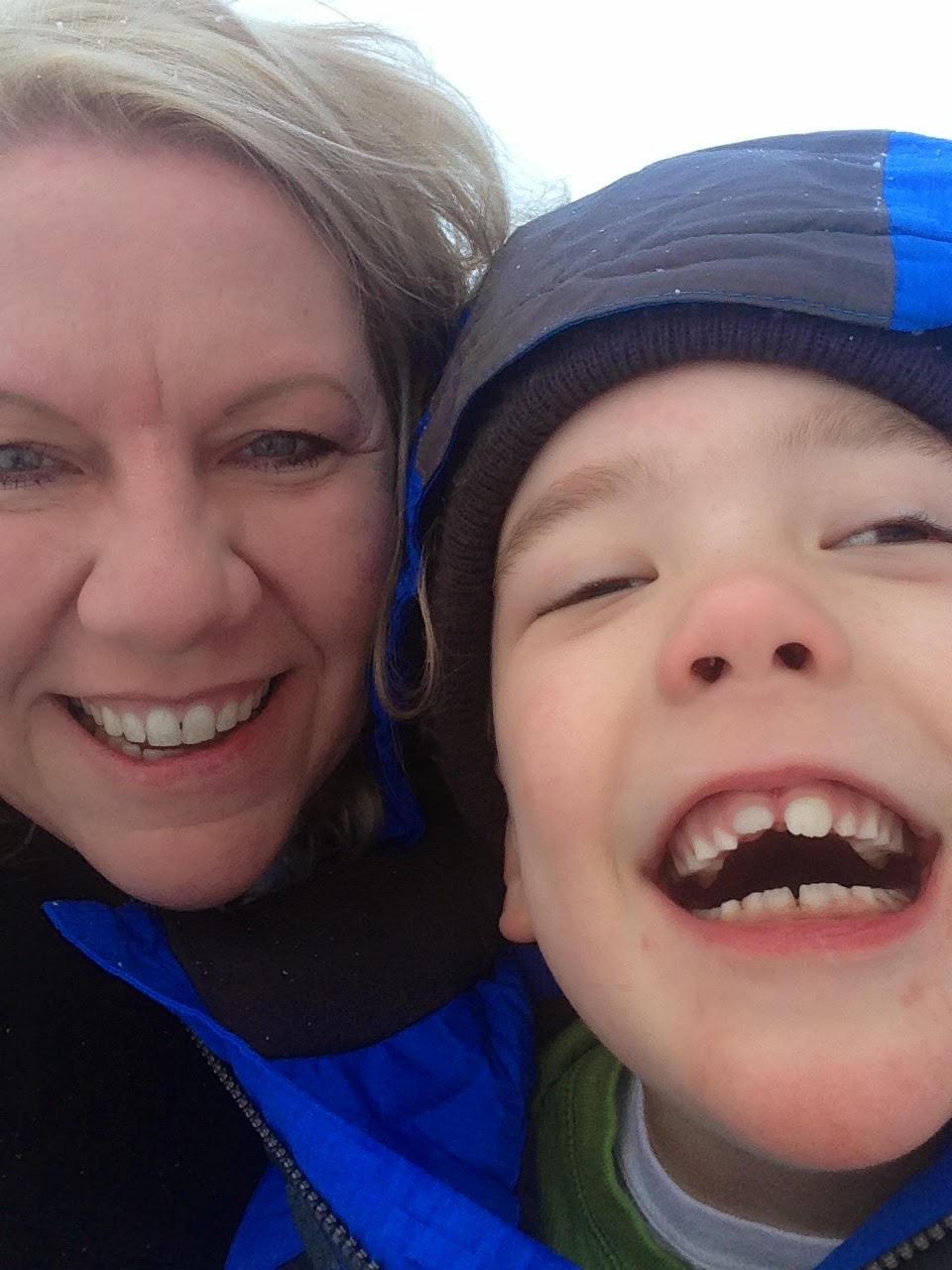 School was back in session on Thursday- Cam (and mom) were very happy to be making the trek down the driveway to wait for the bus.
At Cam's elementary school, they've started a "Link" program, whereby kids with different abilities are linked with their peers who volunteer to be a "Link" buddy.

On Friday, Cam and buddies played boccie ball at school.  The game has been modified slightly to include a ramp that Cam uses to push the ball independently.  Cam definitely enjoys participating in boccie!

The students in the program all eat lunch together and on this day, the local school district newsletter folks came by to take a group picture of everyone.  Can you find Cam in the sea of blue? 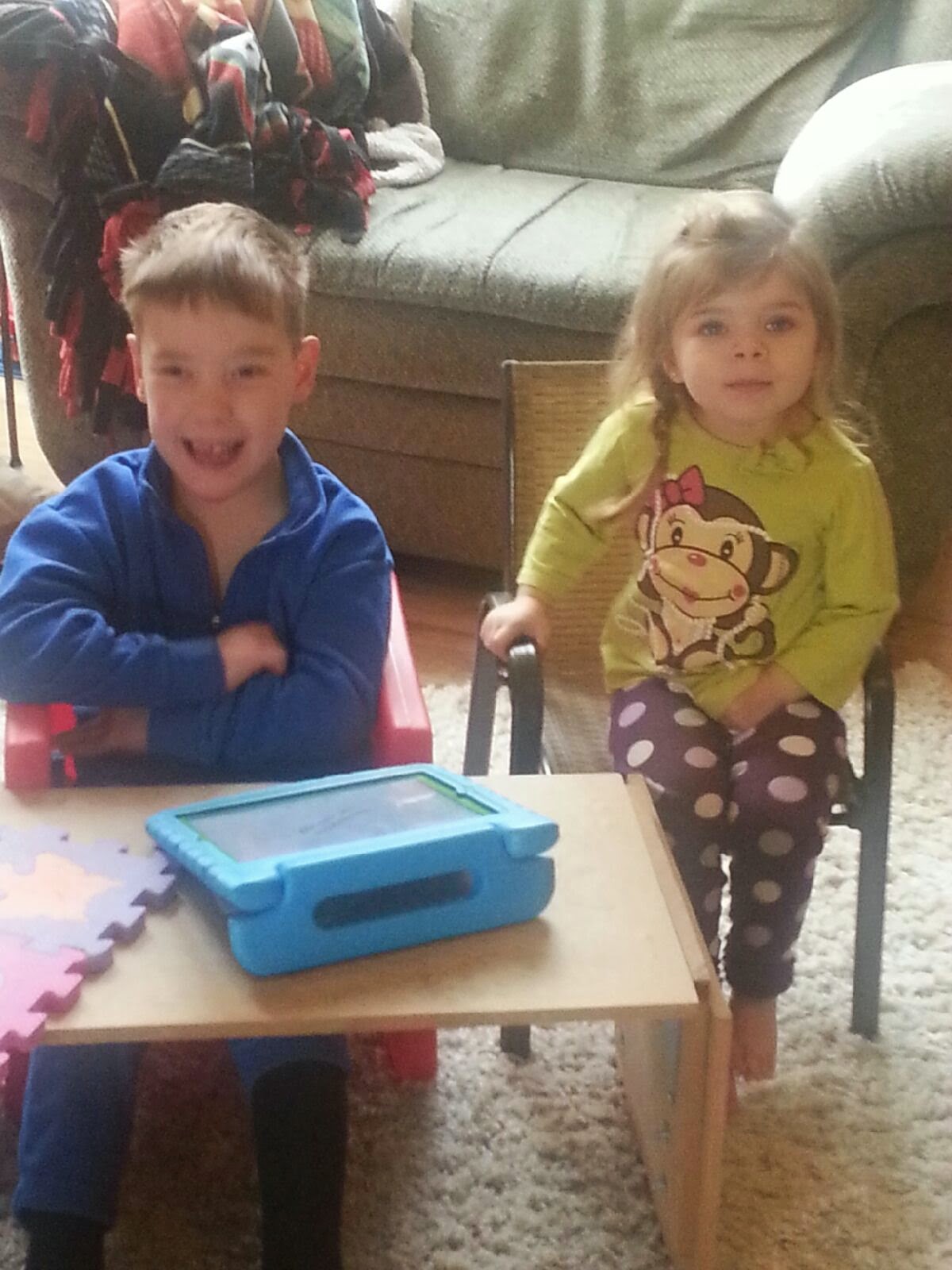 Cam was also in blue when he met Ms. Brittan.  She came to visit with her mom, Mandy, who is such a good friend to Jane.  The two kids had fun playing together and we hope to get them together again soon.

With every new experience, one hopes there is always the opportunity to make a new friend...
Posted by Special Moms at 6:42 PM No comments: 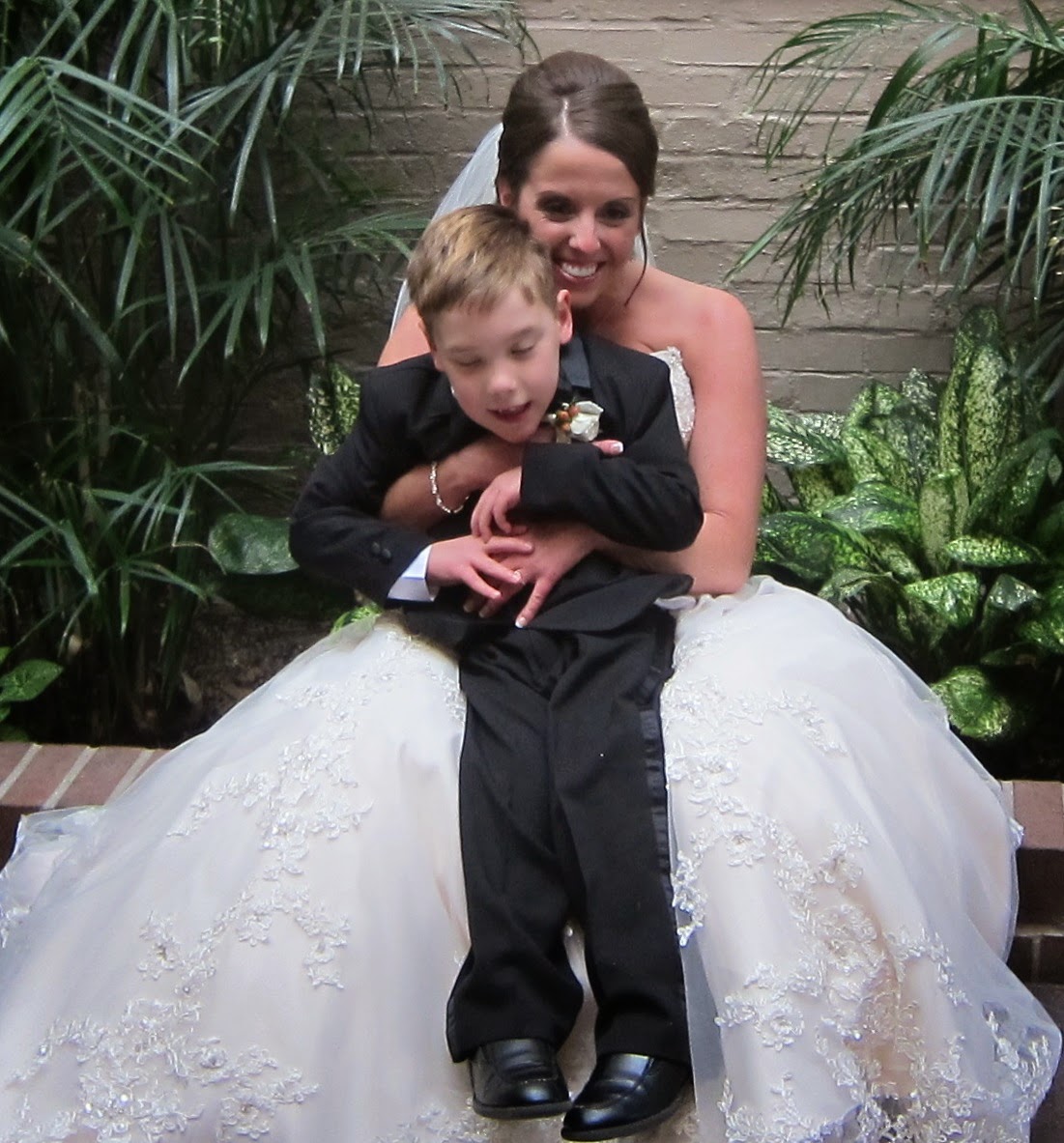 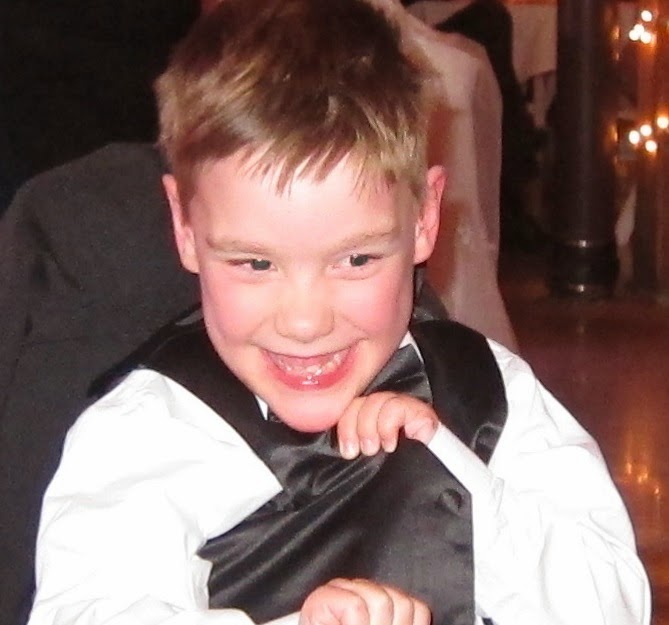 Some people come into our lives and quickly go...Others leave footprints on our hearts and we are never, ever the same...

This week, we were all given the honor of being a part of Katherine's wedding to Paul.    It was a week of preparation, planning, and practicing some picture-perfect smiles! 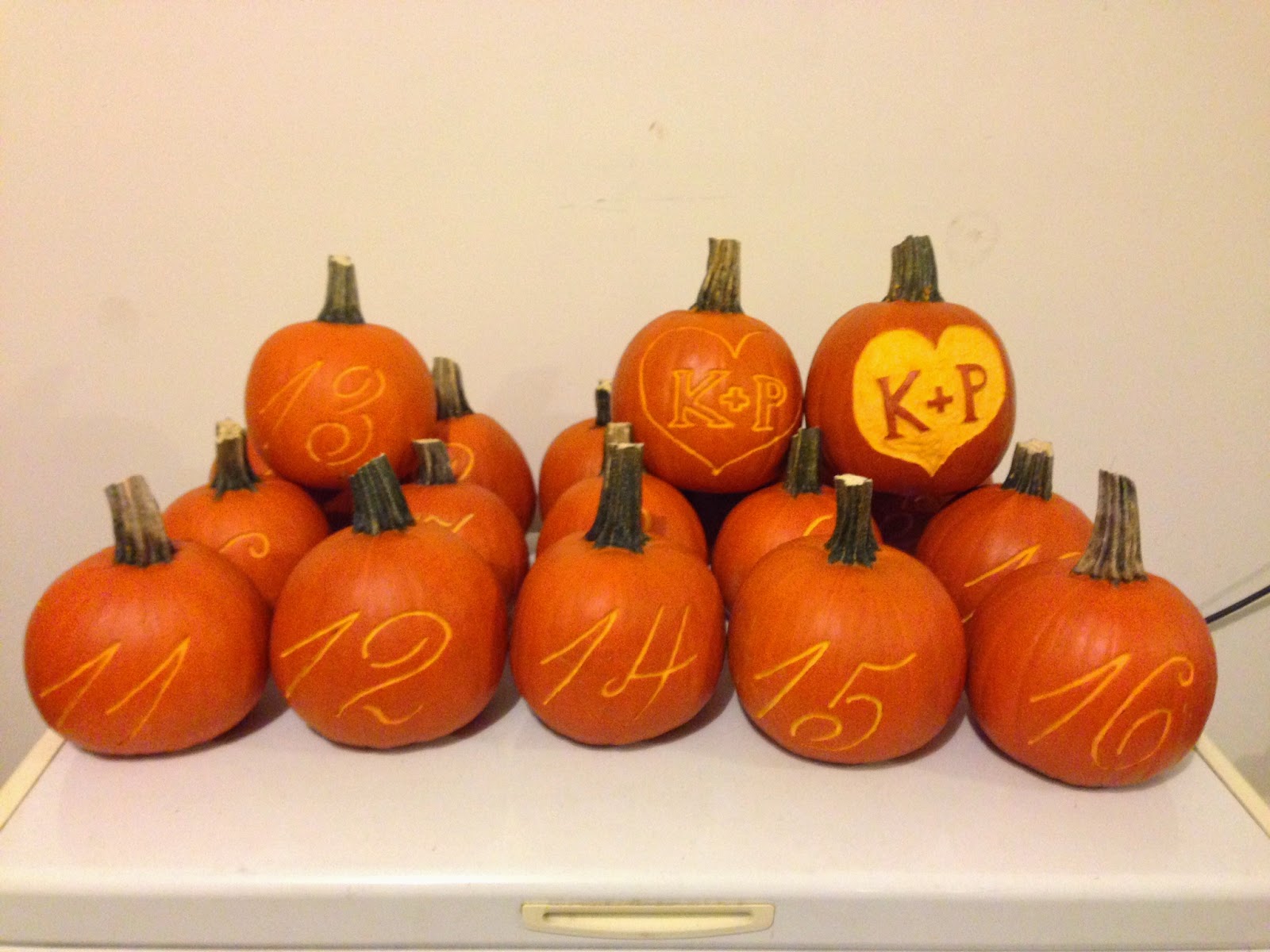 As master and mistress of ceremonies, Chris and Jane tried to fulfill some of their duties prior to the big day.  Chris used his dremel skills, with Cam's supervision, to create the table numbers and sentiments etched into small pumpkins.  Jane was entrenched in crafting projects with Ann to add special homemade touches for the reception and ceremony.

Cam himself was given the honor of being the Sign Bearer in the
wedding!  Katherine created this term and the sign!  Each day as the wedding drew closer, Cam kept asking "when wedding?"  On the day of the rehearsal, he wore a special V.I.P. (Very Important Person) shirt given to him by the sweet couple.  To be a sign bearer, one needs a sign to bring down the aisle.  The sign itself was attached to Cam's powerchair:  he went down the aisle right before Katherine showing the sign reading "Here Comes the Bride!"  After the happy couple were pronounced man and wife, he drove back out after them with the other side of his sign reading "& They Lived Happily Ever After." 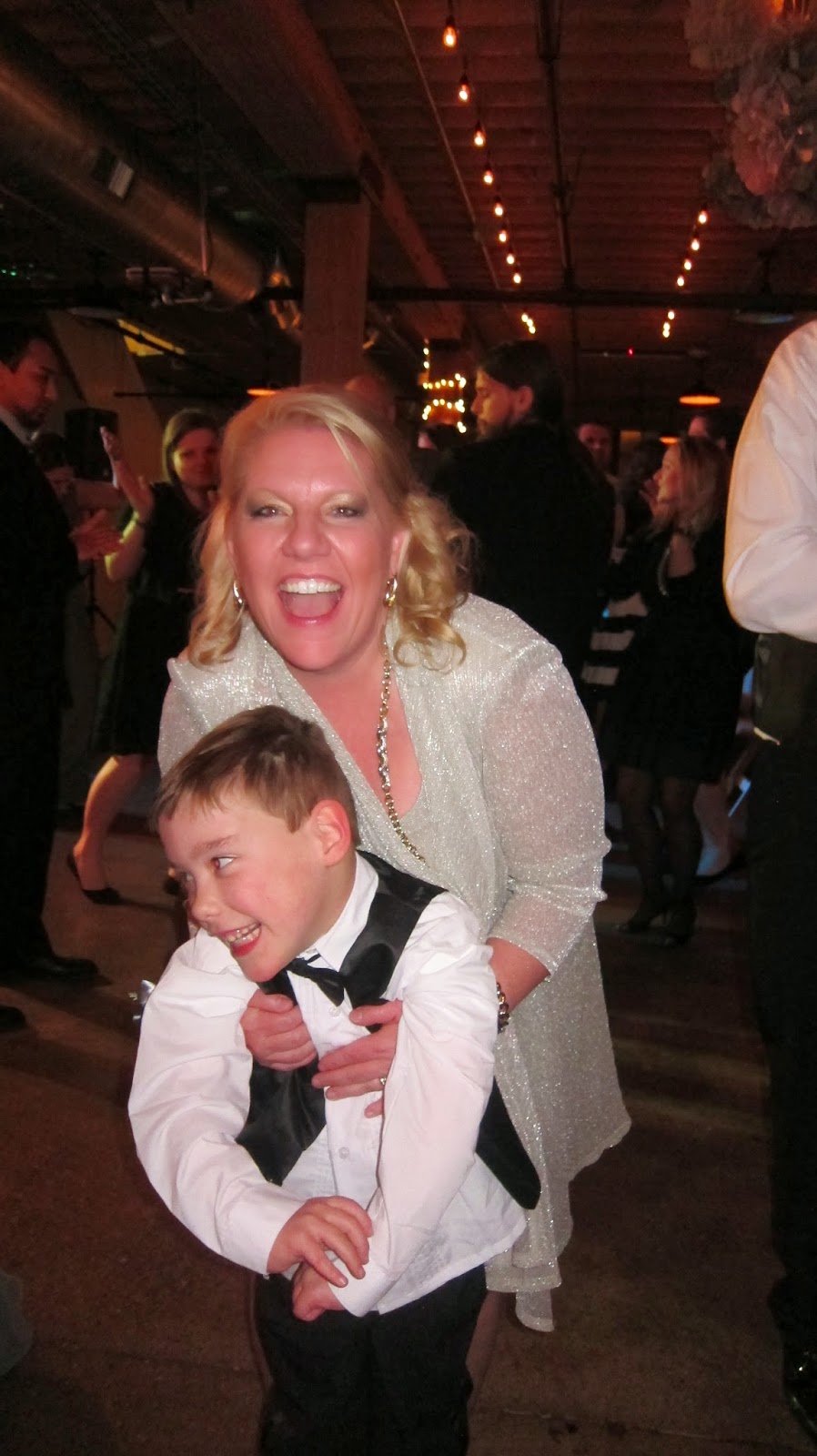 This was the very first occasion Cam attended where a tux was required.  Although he wanted to wear it to school, Jane convinced him to wait until the day of the wedding.  Cam proudly carried out his duties as Sign Bearer and the wedding ceremony went off without a hitch!  Oma and Opa were invited to the festivities as well and we cannot thank them enough for being such a big help on this most important day!

Cam enjoyed dancing with the bride, Ms. Ann as well as his mom and dad.  He even took a spin around the dance floor in his powerchair. 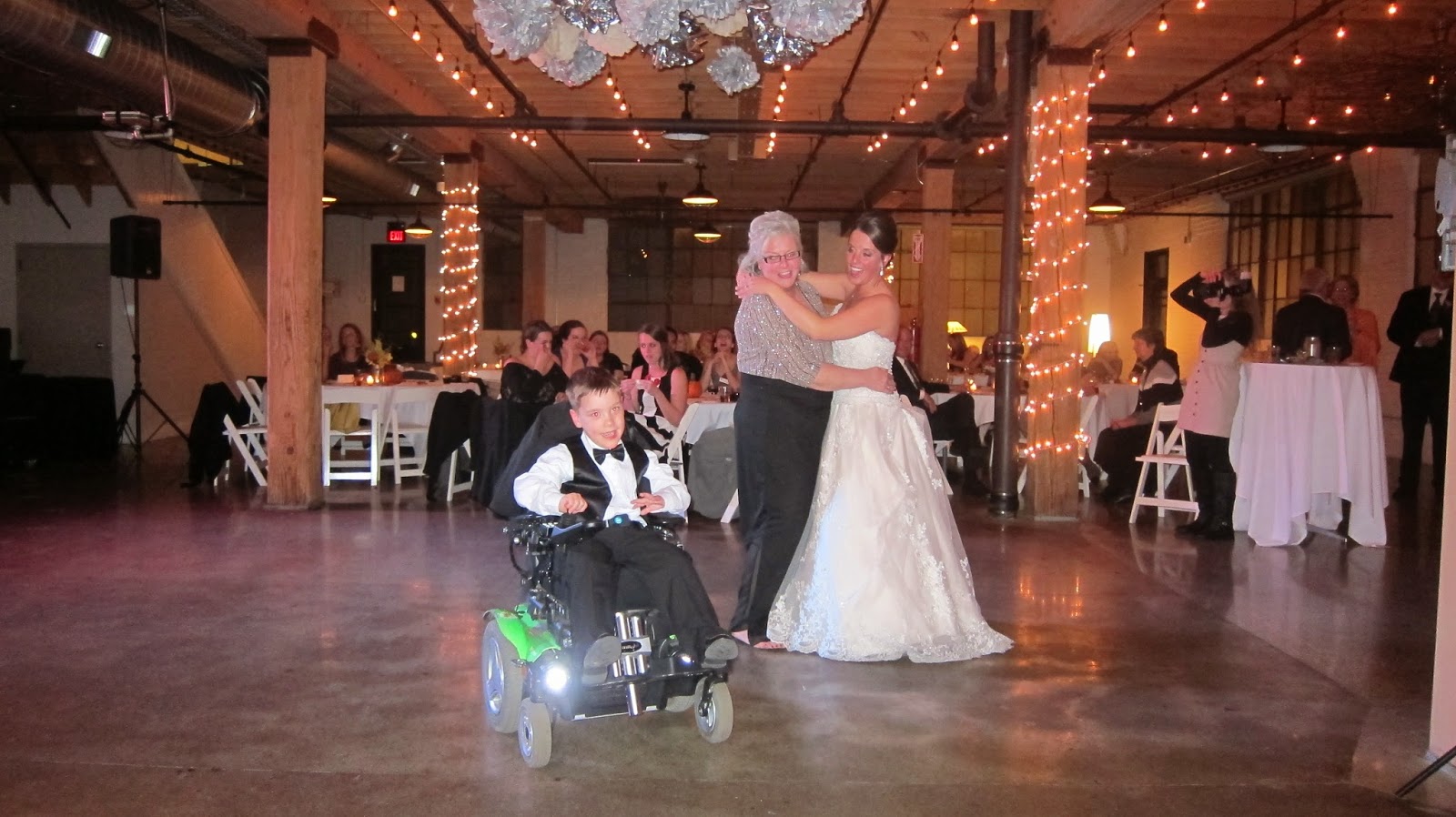 There are moments in life and people in those moments that truly take your breath away.  This day, these people, so many moments... 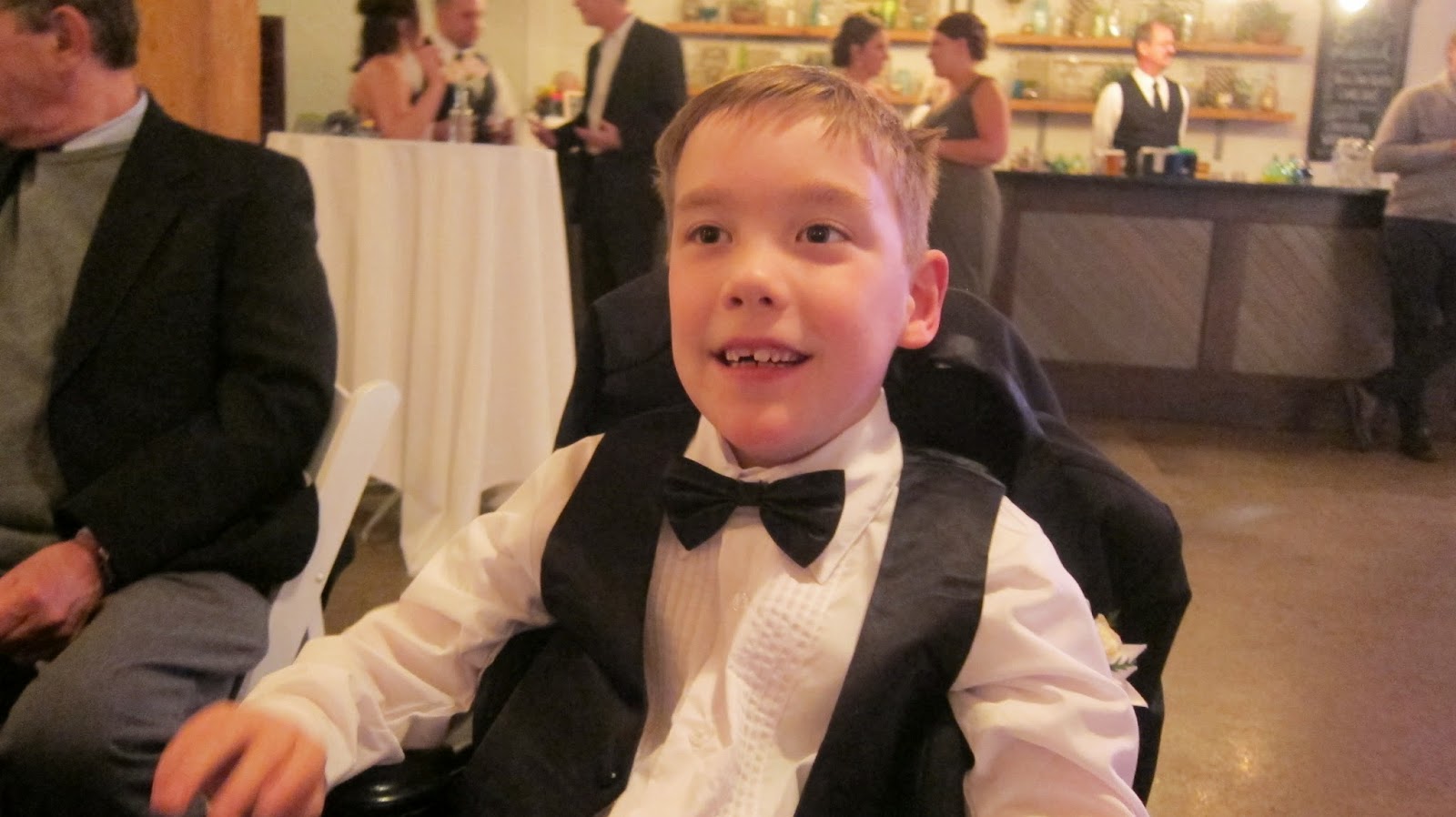 We are humbled by the graciousness of our wonderful Katherine who gave us the gift of herself for almost three years as Cam's dedicated nanny.  We are blessed to have our circle extended by Katherine's mom, Ms. Ann, Molly & Gordy and Christopher and now Paul and his family.  Without our Cam, we wouldn't have the immense pleasure of knowing these people.  We are beyond thankful for them all!

At the end of the day, it's about the love, the magic, and the footprints that will always be in our hearts...

The wildlife in our backyard blend in quite nicely with the surrounding landscape.  One has to look closely to spot the beautiful buck in the picture.

The leaves are falling quickly these days, dancing in the wind and swirling around before finding a resting place on the ground.  The weather was still fairly mild this week, but mornings are much cooler and you can smell the crispness in the air.

With so many leaves, Cam requested to be his dad's helper outside.  Chris was walking around the yard using the leaf blower making certain his boy pointed out where all of the foliage was.
In the past, loud noises have bothered Cam quite a bit, but as he grows older, he's been outgrowing some of his old habits.  For the first time, he requested to use the leaf blower and drive around using the powered tool. 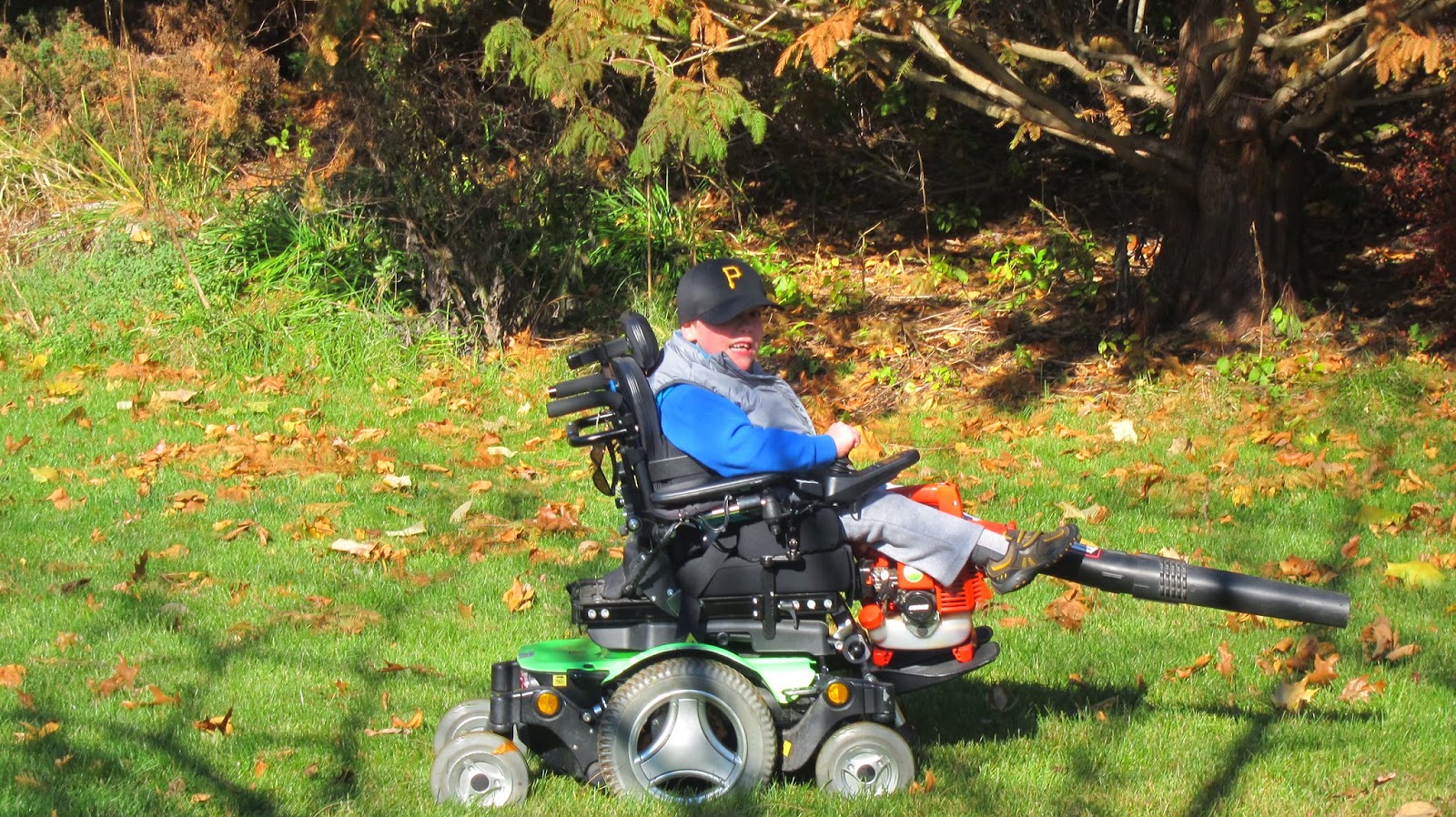 Armed with a big grin, he happily assisted with the final push to move all of the leaves out of the yard.  Fortunately, we are able to "push" them down the embankment at the side of the yard into the woods. 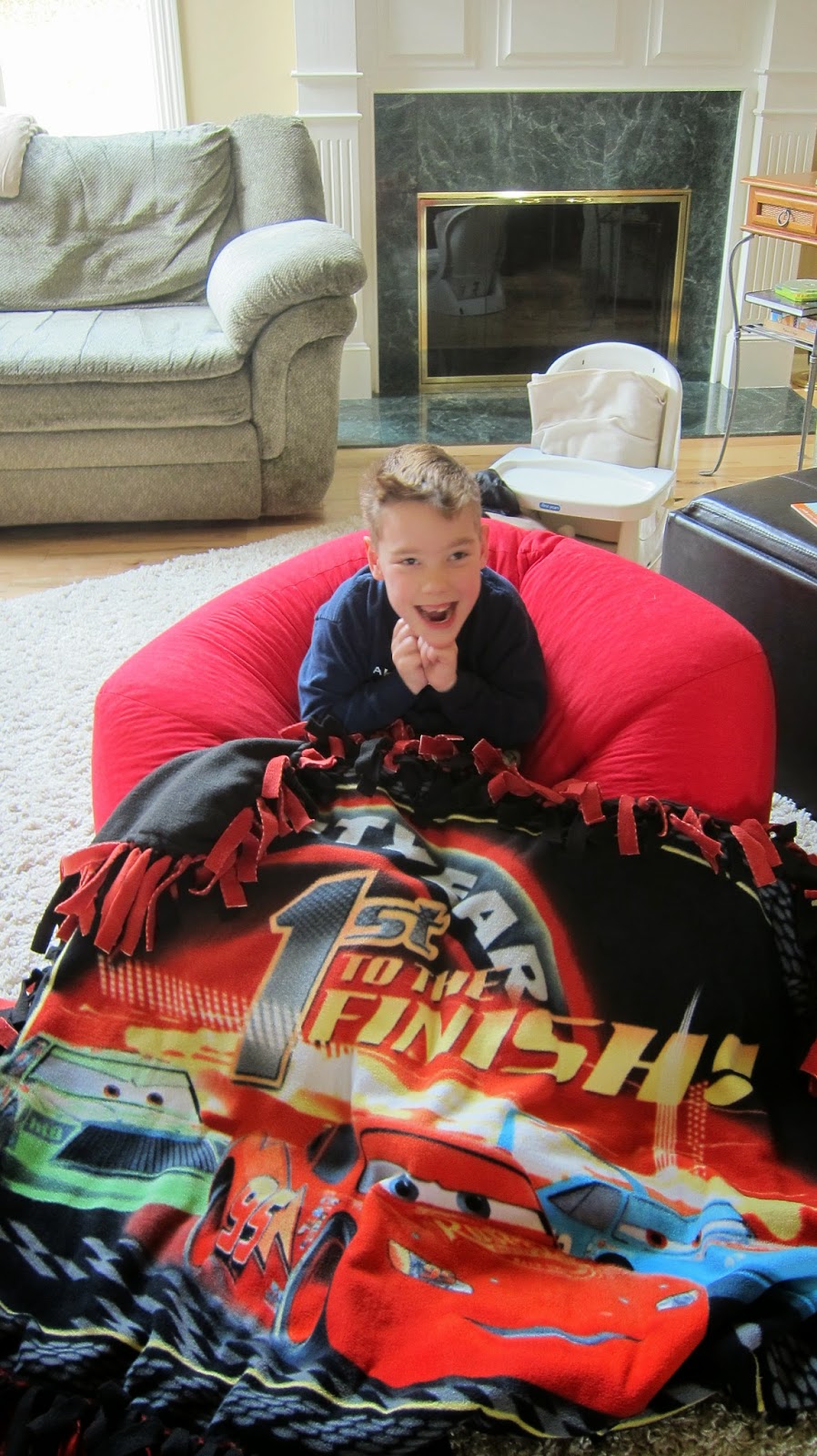 At Cam's school, he met some students involved in the LINKS program.  This programs links student volunteers with other kids that have different abilities.  Cam eats lunch with his "linked" buddies and has an opportunity to participate in other school activities with them.

Another happy occasion this week was receiving mail from Cam's Grandma Sue.  Although she's not able to visit in person, she sends her grandson lots of letters in the mail.  Cam loves sending her his artwork and notes too.  As the weather turns cooler, this boy is thankful for the cozy "Cars" blanket Grandma Sue made for him.

Cuddle up folks, winter may be just around the corner...

Sometimes we underestimate a kid.  Not intentionally, but maybe because we're unsure of a choice or decision they'll make...

Each year we've "helped" Cam decide what to be for Halloween.  This year, when asked, he emphatically indicated he wanted to be a bus.
It may sound a bit strange to some, but Cam has been riding a school bus ever since he was 2 and 1/2 years old.  He loves his bus ride to school and home and we truly believe he's had the best, most caring drivers around!

The challenge for Chris and Cam was creating a bus that was also "drive-able" for Halloween.  Thursday was the big reveal at Meadowbrook elementary school.  This was the first year Cam was a real part of the Halloween parade, able to maneuver by himself.  As our bus driver waited for the kids to come out of their classrooms, each student passing by kept remarking how cool his costume was.  As proud parents, we watched Cam take it all in and expertly drive around the gymnasium as other parents clapped and cheered!  Quite a day to remember.
We were quite pleased when the school schedule called for a record-marking day on Friday, meaning Cam had the day off of school and could sleep in.
Oma & Opa arrived in the afternoon and we transported the bus over to Chris' work where they have trick or treating at the office desks.  The kids and adults all stopped to check out the driver steering carefully through the hallways.

Immediately following that fun venture, we headed over to our neighbor's home for dinner and the official neighborhood candy collecting!

The kids were bundled up in the very windy, chilly evening air, but we were all thankful the rain and sleet had stopped.  As we approached each doorway, Cam declared "trick or treat" each time and said "thank you," and of course, was immediately ready to head to the next home.  Unfortunately, Cam's parents were happily chatting away with neighbors and had a tough time keeping up with their expert driver!
(The video below is a "time lapse" taken by Karen- pretty cool!)

The weekend brought 'Auntie' Karen and Ms. Ann to visit and check out the now-famous Halloween creation.  They remarked how awesome it was that Chris & Cam painted the bus, added the lights, and made a workable "whoa" sign.  The best part was the bus simply "fit over" Cam's powerchair.
Jane's biggest contribution was finding the hat for her favorite boy on Amazon- it had a picture of a school bus with the caption "You Can't Scare Me- I Drive a Bus!"

In a culture where technology can take hold, we're thankful for simple traditions, creative minds, and happy kids who can gather together to head out on a cold Halloween night and participate in the candy trade afterwards!
Posted by Chris Weatherford at 11:42 PM No comments: