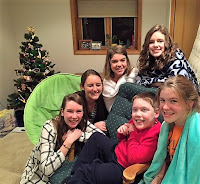 Dec. 25th seemed to sneak up on us this year since Cam was in school through Dec. 22nd. 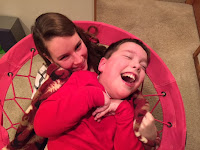 On Christmas Eve, Oma and Opa arrived in the afternoon to celebrate our annual trek to Thornapple Covenant Church with the Raisch family.  Cam loves the service, especially all of the singing now that he recognizes most of the carols.  After the 3:30p service, we dined with our awesome friends at their home where we enjoyed homemade chicken noodle soup and bread, fruit, and plates and plates of delicious holiday cookies. 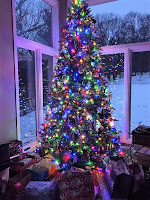 Afterwards, Cam requested some game playing time.  His latest favorite is charades.  Everyone had a turn and our game enthusiast enjoys guessing as much as he does the acting part. 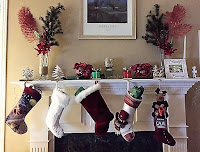 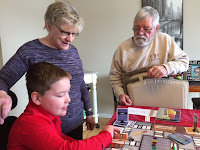 The night before Christmas everyone was snug in their beds except for our nine-year-old who contracted a cold seemingly that night.  Although he had terrible sleep, he was in a great mood Christmas morning!  Being the routine boy he is, we had breakfast before opening presents.
It seemed that each of us, Cam, Chris, Jane, Oma and Opa were just as excited to see others uncover a gift given as we were to see what each of us received. 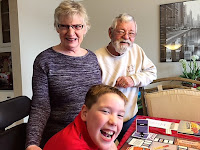 One of our annual offerings to Oma is a picture calendar from Cam.  He assists with the design and it's always a treat when she discovers what it is.

New games kept Cam busy as he tried out a Police Line-Up board game as well as a Scavenger Hunt. 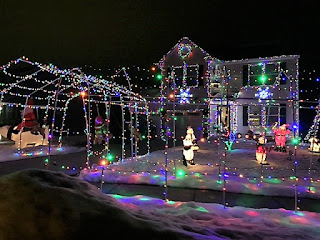 Cam's largest present this year was a new sled which can't be used yet due to a big meltdown but we're certain he'll be able to take it on its first run sometime in January.

After a delicious dinner and homemade apple tart dessert- compliments of Oma and Cam, we all piled into the van for our Christmas light viewing.  Thanks to an ingenious website, the best displays are listed by area and address making it easy to plot a course.

This year we didn't take any pictures while enjoying Christmas- we were too caught up in the moment.  Being with our family and enjoying their presence versus presents is truly what we are thankful for.

Dealing with a cold is difficult, but we found the silver lining in Cam's comments regarding his illness. 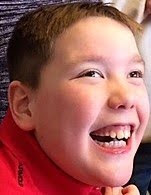 It feels like there is a hundred and fifty things in my nose!

If you feel like your ears or throat hurt, I can take you to the med center.
It's just my nose, Mom.
The med center won't give you medicine for just your nose, Cam.
You need to call my real doctor.

Posted by Special Moms at 11:32 AM No comments: 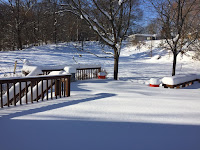 "The first fall of snow is not only an event, it is a magical event. You go to bed in one kind of a world and wake up in another quite different, and if this is not enchantment then where is it to be found? "~ J. B. Priestley

The white stuff quickly accumulated and the only unfortunate outcome was the freezing cold temperatures precluding any playtime in the snow. 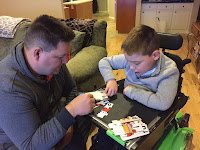 Thankfully, we found indoor activities to keep us busy.  Early Christmas presents arrived for Cam and not a moment too soon with the frigid weather.  A new spelling activity from Auntie Leslie kept us busy creating a game out of letters and puzzles.
Auntie Karen sent a gift that keeps on giving every month- Little Passports. There are multiple options to choose from and Cam will be discovering the USA with monthly activities, games, science experiments & more!
He was beyond excited to see the contents of his first passport package and has asked to work on it every day. 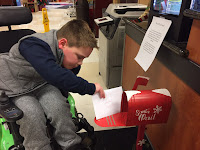 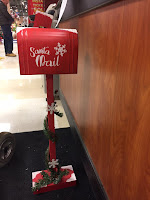 Cam opted not to visit Santa in the mall this year but did want to send a letter.  Luckily, our local D&W store has a special mailbox just for delivery to the North Pole.
His request was short and to the point..."Dear Santa, I would like a squish ball for the water like the one from swimming class.  Thank you.  Merry Christmas.  From, Cam."  His questions, however, were endless regarding the delivery method and route taken from the Santa mailbox.

Amanda and Cam entertained each other in the evening when Chris and Jane finished up some holiday shopping.  Baking delicious treats is a favorite for these two as noted by the plate of warm cookies.  Can't you just smell the goodness?

This year Cam discovered that one radio station in town plays Christmas music 24/7 through the holidays.  While in the van or in his bathroom, he requests us to tune in and "turn it up, please."

Mom asked, What is your favorite kind of music?
Christmas music!
Why is it your favorite?
Because there are pretty voices and I like all of the songs.
Posted by Special Moms at 7:37 PM No comments:

You're Getting Sleepy - Week of Dec. 5th 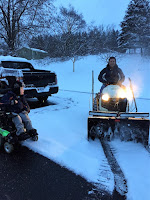 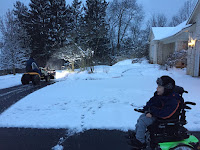 “Foolishness sleeps soundly, while knowledge turns with each thinking hour, longing for the dawn of answers.” ~ Anthony Liccione

Winter has settled in and the falling snow blanketed the ground giving the illusion of a soft, downy white cover.

The summer lawn mower undergoes a transformer move and becomes the snowplow for the winter months.
Cam likes to supervise his dad while he plows the driveway. 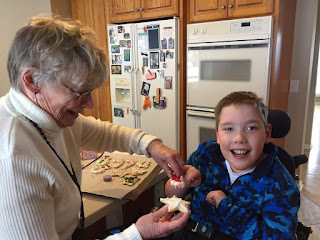 Oma came to stay and Christmas baking along with decorating cookies was the highlight of their time together.  Cam did insist on taste-testing their creations just to be certain they were working with the proper amount of sprinkles and m&m's.

In the Weatherford household, sleep has been alluding us.  Cam has been waking up on and off a few times every night.  Legend says when you can't sleep it's because you're awake in someone else's dream.  So, if any of you see Cam awake in your own dreams, please tell him to go back to sleep... 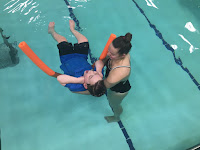 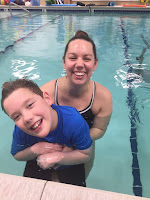 We finished up our last December lesson with Ms. Laura.  The pool at Mary Free Bed is warm and spacious.  The biggest benefit - teacher and student have the water to themselves.  Cam worked on some back floating, front strokes, and utilizing a water logged ball to create some sort of sprinkler system.  This seemed to work well for splashing his Oma! 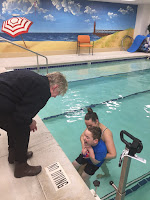 Back at school, Cam's teacher, Ms. Kathy, requested that he bring in snow boots on a daily basis by sending an email to Jane.  She has been teasing Cam that he needs the boots so she can throw him in a snow bank. (They've been talking about this for a few weeks now.)

Ms. Kathy told Cam there was finally enough snow.
As they were discussing the possibilities, Cam asked his teacher an all-important question, "What is a snow bank?"

Cam is a people-pleaser.
He likes to see a positive reaction when he says or does something.  One morning after a bit of restless slumber, he announced to his parents:

"I will sleep tonight like it's nobody's business!"
What exactly does that mean, Cam?
"It means like nobody has to worry about me."
Posted by Special Moms at 9:14 PM 4 comments: 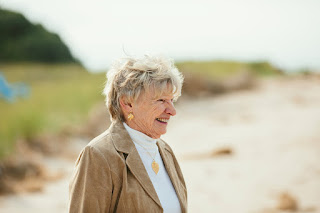 It's not often you're able to surprise someone, really surprise them.  We were honored to be able to celebrate Oma and her birthday in person on Dec. 1st as we provided an unexpected appearance at dinner in Muskegon. 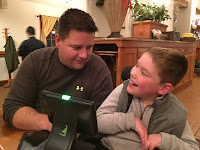 She doesn't want us to mention her age, but she does share a birthday with Woody Allen and he is one year older than she is.  Cam was super excited about the evening as we made it to Olive Garden right before Oma and Opa.  When Oma spotted us from the hostess stand, you could tell we were successful!  Many thanks to Opa for his part in keeping the secret.

It was no coincidence that Cam chose our restaurant for the evening.  Olive Garden now has an tablet for ordering, playing games and paying your bill.  Pretty high tech stuff and highly irresistible for a nine-year-old.
Another unexpected treat was a free kids meal since Cam found the "elf" hiding up high even though he told us "it doesn't look like the other elf on the shelf."

Our family only began the "Elf on the Shelf" tradition a couple of years ago.  Cam named the elf Gerrit and this season, Cam's been especially interested in finding the red-suited guy every morning to see where he shows up.  It's quite curious, though, how the elf may be connected to something that a parent needs to use, such as headphones.  Since the elf cannot be touched or he will lose his magic, the ear device then stays connected to the elf all day long.

'Gerrit' was found holding a blue sharpie and upside down one morning in an empty container.  A note on the plastic house read "Help I fell in and can't get out now!!! Please turn container over."
Upon seeing this entire scene, Cam looked at his parents and said, "Now how did the elf write the note?"  Hmmm, yes, curious minds want to know.
Chris was convinced (and persuaded Cam) that the elf had the ability to ink the request from the inside of the container while upside down.  That's one crafty elf!

As we celebrated Oma this week, we're constantly reminded of all she has helped instill in Cam... a love of music, enjoyment of books, and appreciation of baking.  Here's to you, Oma!
“Today you are You, that is truer than true. There is no one alive who is Youer than You.”
~ Dr. Seuss, Happy Birthday to You!

As colder temperatures are upon us, the family moved seasonal coats upstairs for easier access.
Chris tried on a warmer jacket one morning and asked Cam if he liked it.
"It suits you, Dad!"
Posted by Special Moms at 12:07 AM No comments: