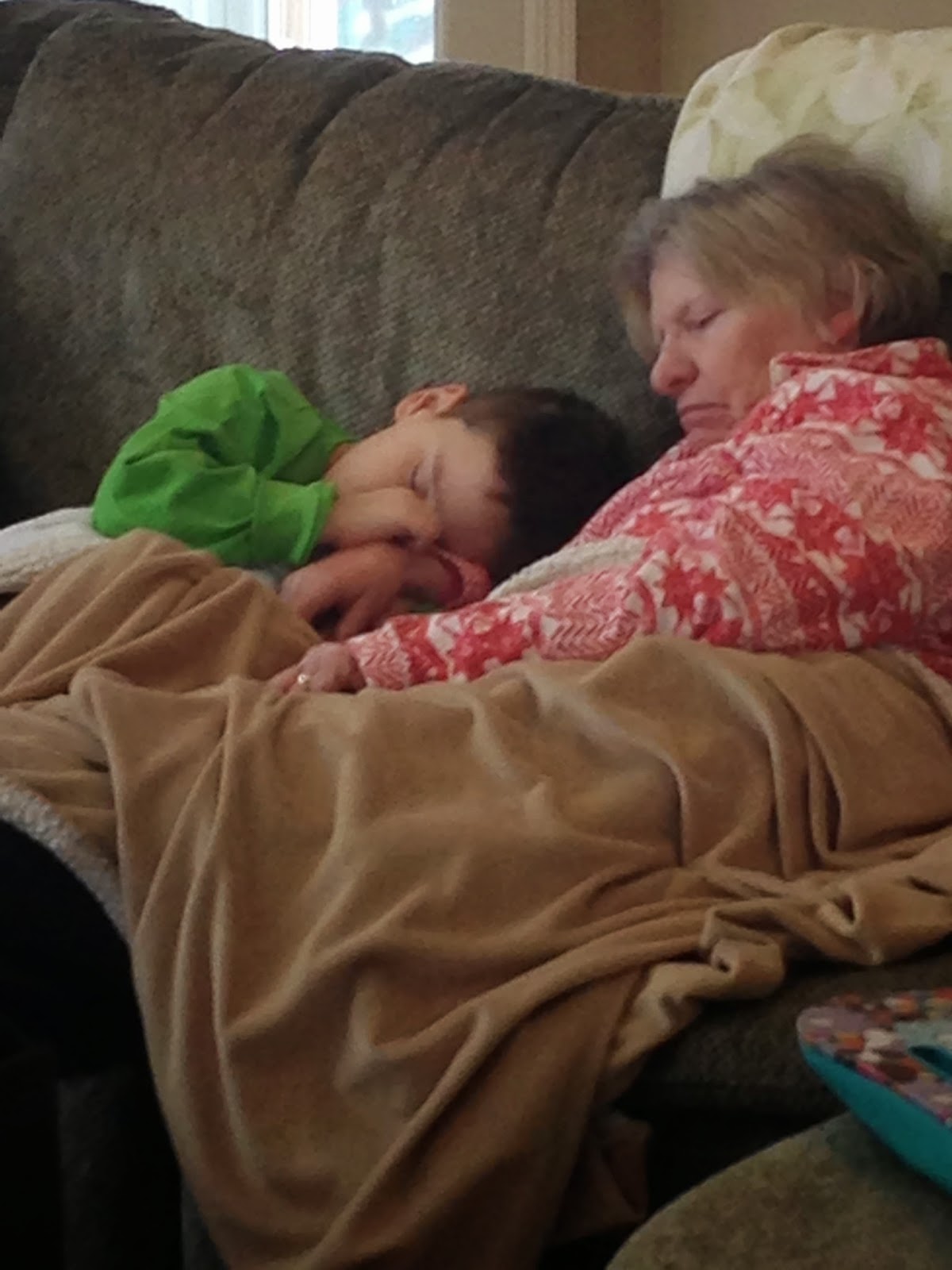 The week started off with a swimming lesson and looking forward to a visit from Oma on Thursday and Friday.  Cam did not have school due to record-marking days for the teachers.  On Wednesday, though, Cam came home a bit early when he wasn't feeling well.  Instead of having lots of playtime with Oma, they shared quite a bit of couch time together...

On Friday, things were looking up and Cam had his appetite and laughter back in full swing!  We were sad to see Oma go, but so very thankful for her time and help, as well as risking exposure to illness.

We had a visit from Miss Ann on Saturday as she and Cam compared who had the coolest glasses and how smart they both looked. 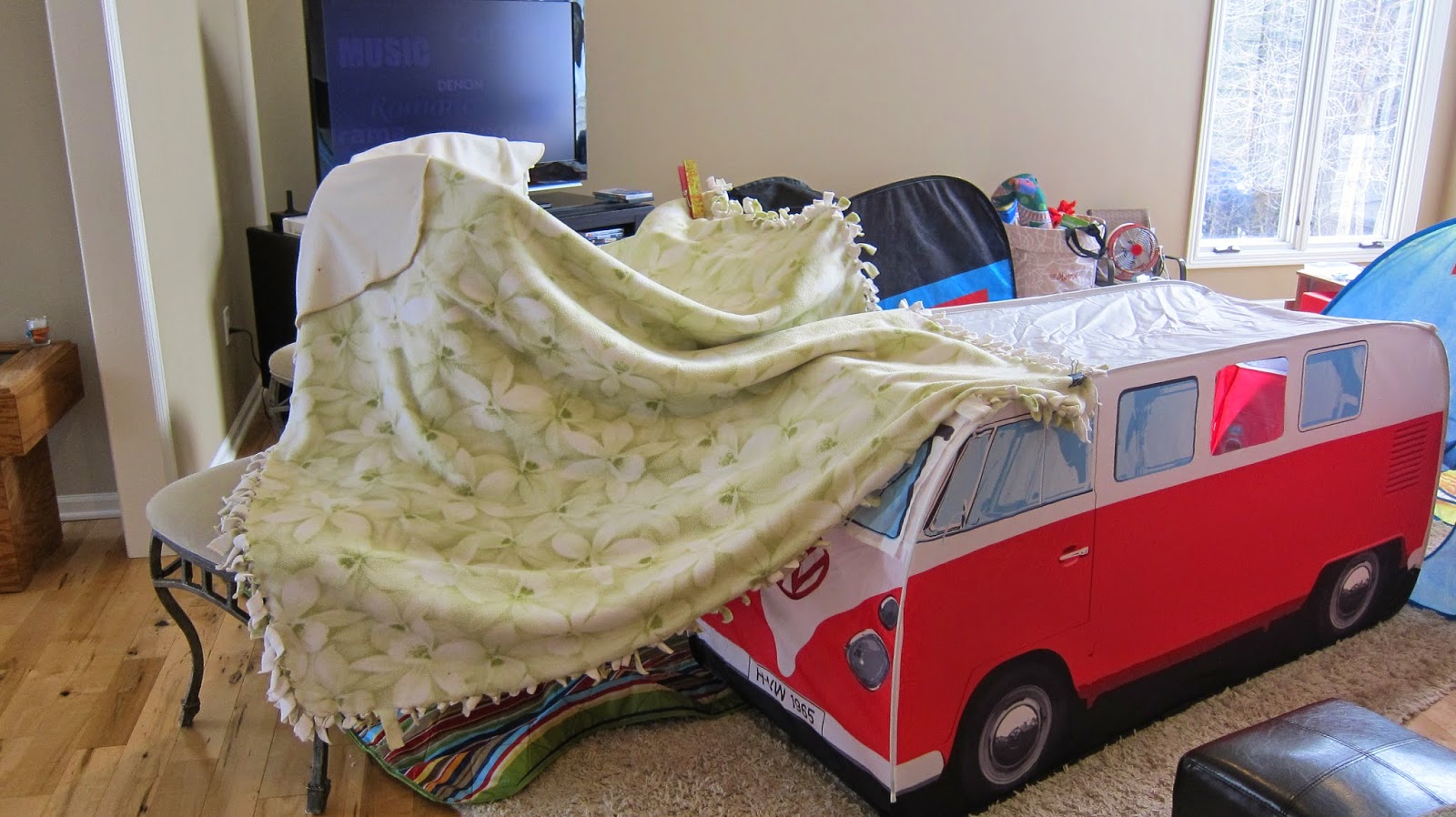 One of the toughest parts about being sick is not being able to play with your friends. Fort building is an art that some kids really excel at.

On Sunday afternoon, with Cam supervising and Emma creating, the multi-faceted fort was complete.

It just may be that some of our greatest thoughts, ideas and inventions were realized in a homemade blanket fort.

Your friend is your needs answered. ~Khalil Gibran
Posted by Special Moms at 9:33 AM No comments:

On a cold winter day, a warm relaxing pool certainly does look inviting...
Cam started his swimming lessons this week at MaryFreeBed downtown.
He loves being in the water since his grandparents live on Lake Michigan (which isn't nearly as warm as the toasty pool).  For the next five weeks, he'll be working on being more comfortable in certain areas like floating on his back and being underwater.

We are most fortunate to still have Kelsey with us on Mondays, which just happens to be the same day of Cam's swimming lesson...and that possibly wasn't by coincidence :)

Since Kelsey is a professional lifeguard, we gained permission from Laura, Cam's assigned instructor, to have Kelsey in the pool as well.  The 45 minute lesson goes by much too quickly, but our water boy is so fortunate to have two instructors, especially when one of them is such a favorite friend.

Besides swimming, another new regiment began- wearing glasses!  Cam had glasses for a short period of time when he was younger and his ophthalmologist thought it would be a good idea to use them now for schoolwork and reading.  Although he doesn't appear overly thrilled in this picture, he really does like them.  Cameron was quite intent on picking the blue colored frames and blue case without any influence from his parents. 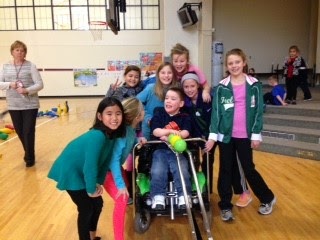 At school this week, the kids played boccie ball again and the cool ramp Cam uses has become quite the hit.  When Chris saw this picture from school with his proud son surrounded by a group of girls, his comment was "that's my boy!"

Posted by Special Moms at 9:07 AM No comments:

Bring on the Snow Machine! - Week of Jan. 5th

A typical Michigan response to the lack of snow is to pack a wallop when it comes!  True to form, we accumulated more than ten inches of snow in one evening.  Consequently, Cam did not have school on Friday. 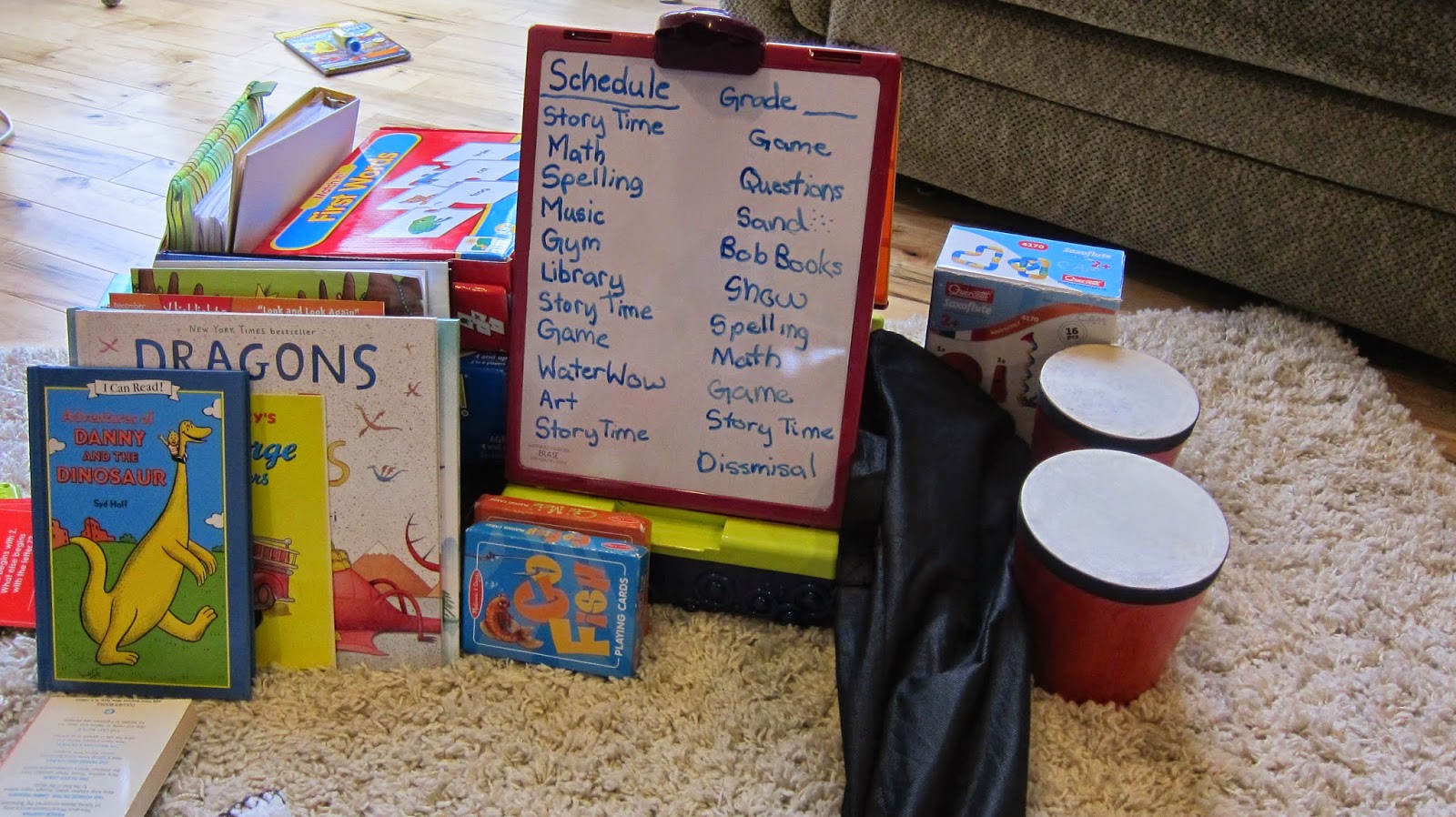 Luckily for Cam, school can be in session any time because his buddy Emma knows how to set up school right in our home.  As one can see, the school schedule is quite extensive and there are definitely extra activities for time permitting.

Truly, the academics are covered here with math, spelling, and reading.  If school goes well, there is time for an "intermission show." 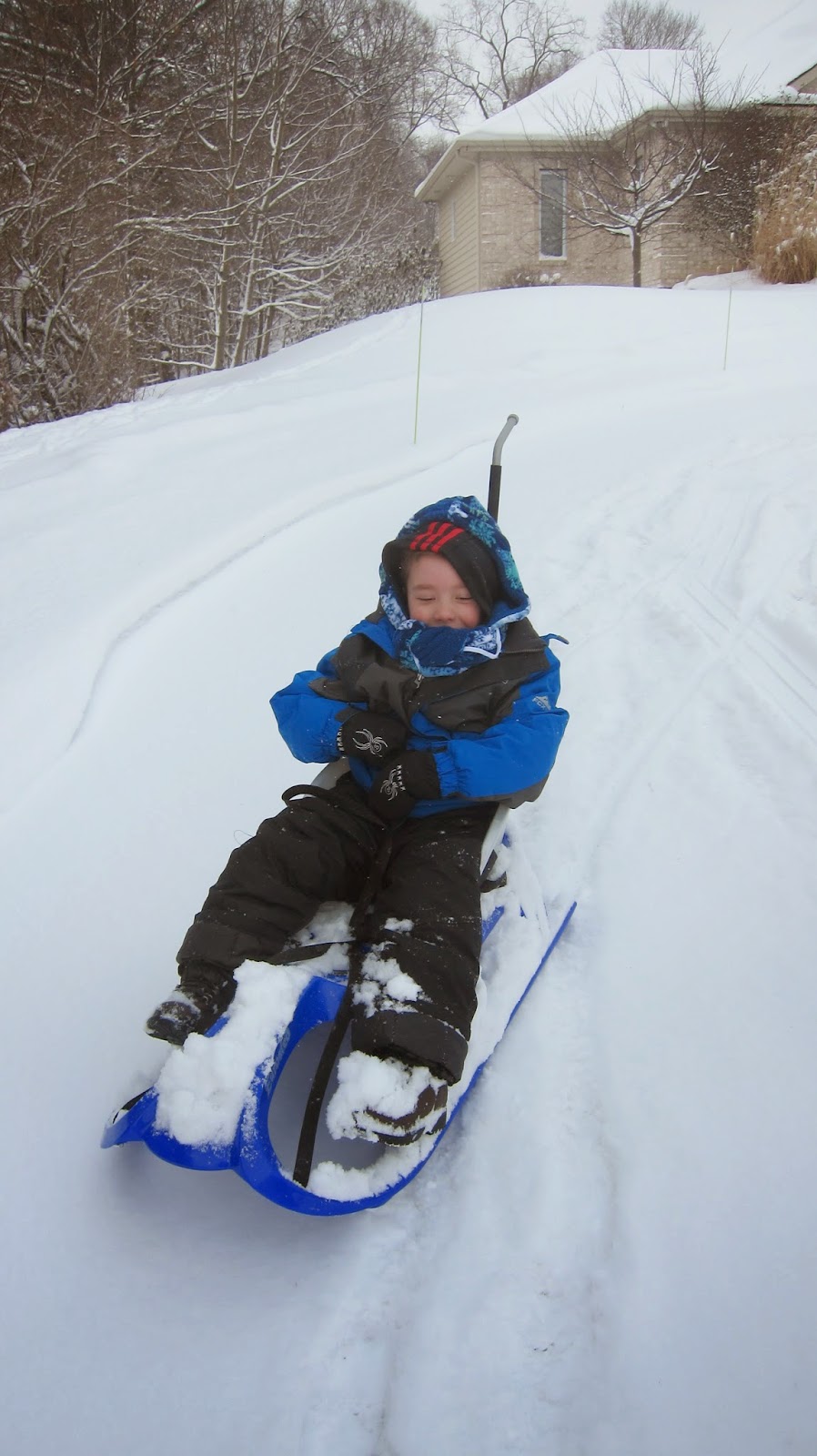 We attempted sledding in our front yard, but the snow was so deep and fluffy, it didn't make for a very slick course.  Even the steep driveway couldn't provide an advantage.  Cam and Emma wanted to stay outside, though, so we all figured out a way to play restaurant in the backyard. 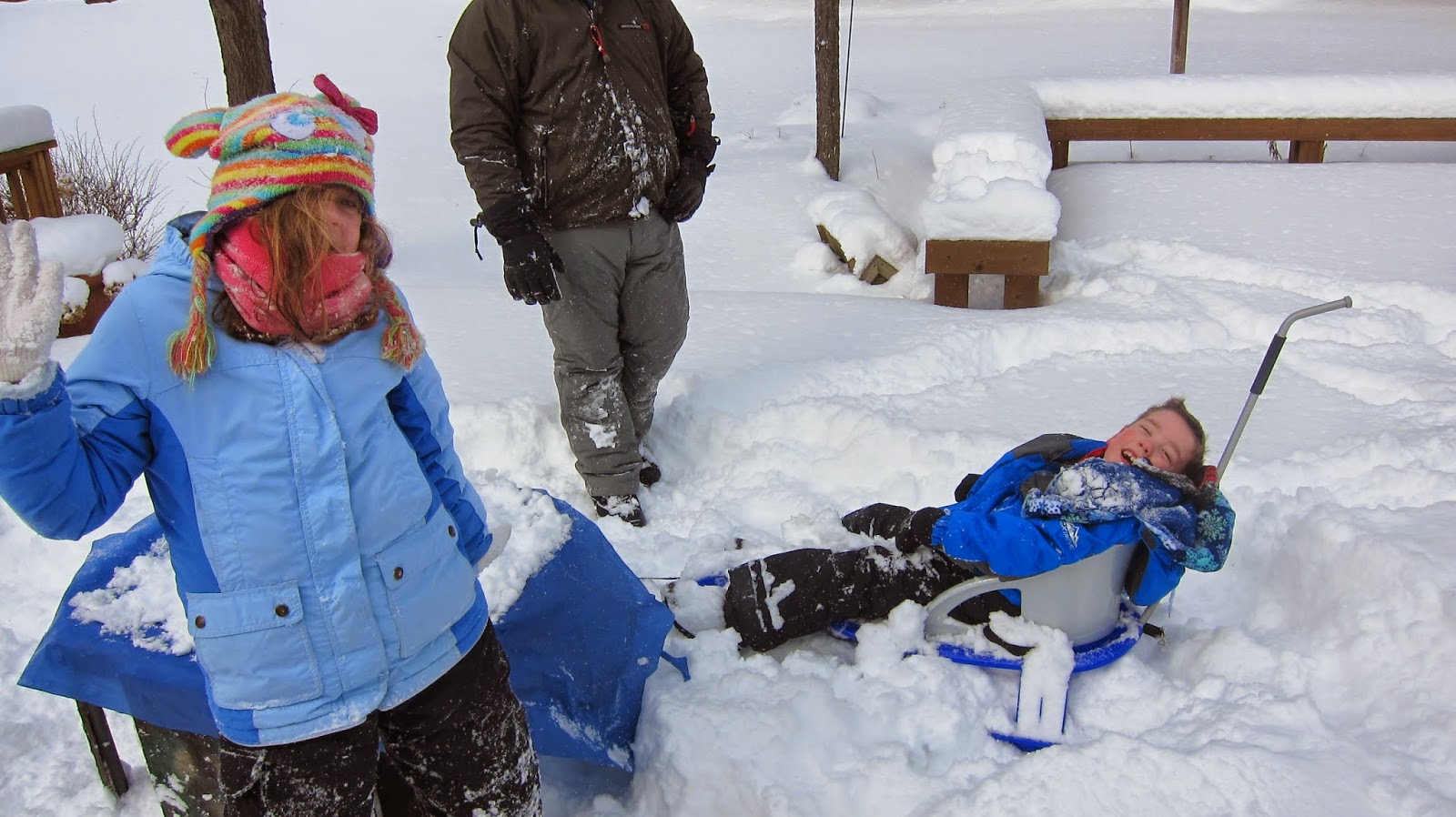 Emma was the chef and Cam was a diner.  He dined on "Snow-co Puffs" and hot chocolate with "one billion marshmallows" included.

Cam did enjoy the menu and told Emma he wanted to come back again.

And now we welcome the new year. Full of things that have never been.
~Rainer Maria Rilke 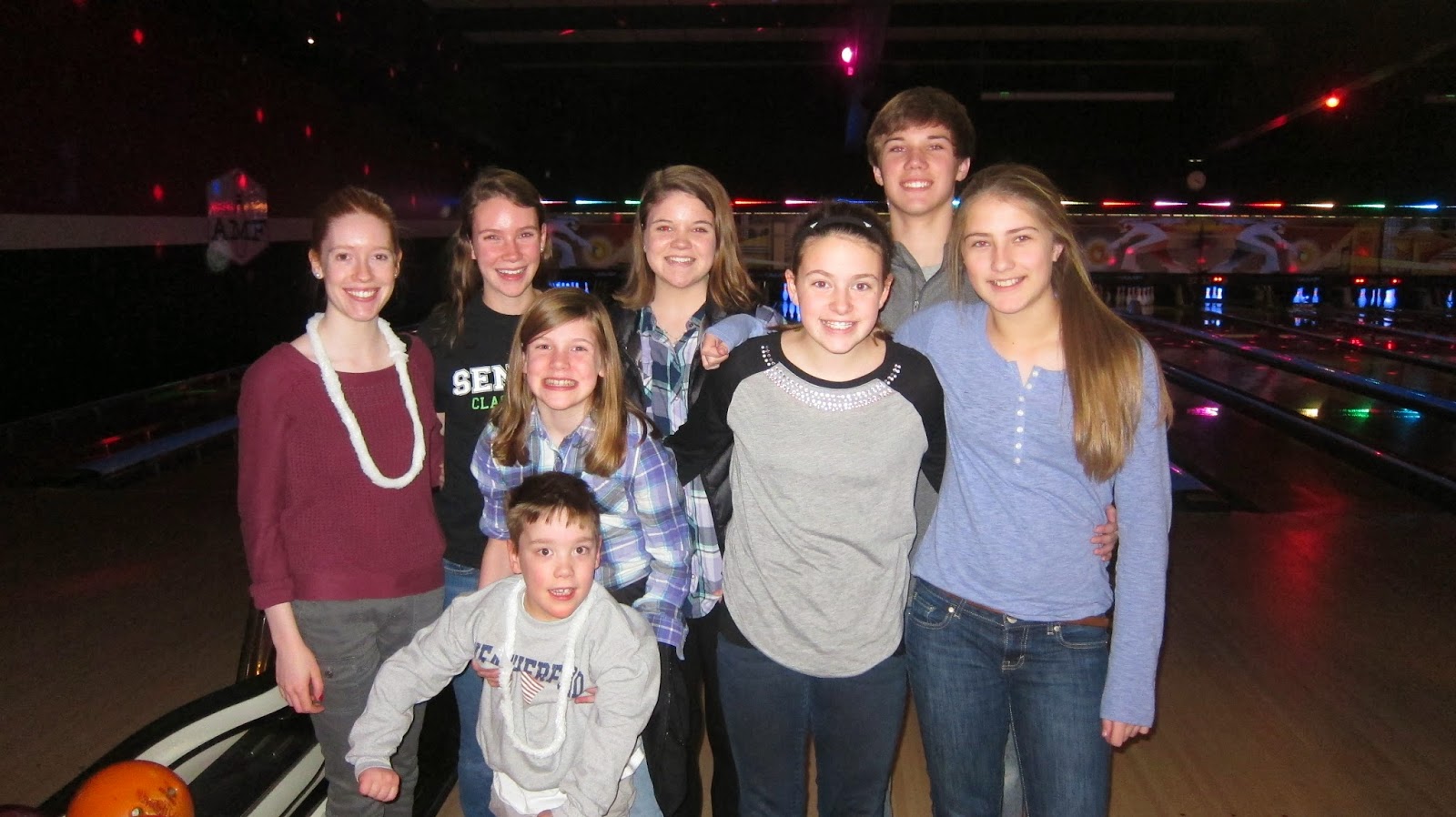 For the first time, we opted to go bowling as a family on New Year's Eve.  To make it even more special, we met up with the Raisch and Flegel families- our "forever" neighbors.  Cam used the helper ramp for the bowling ball and each and every time, his buddy Emma retrieved the ramp, which was also being used by a few other lanes.  Even the with "bumper rails" the kids seemed to have better aim than the adults!  The package deal included pizza, pop and 2.5 hours of bowling fun.  It's hard to believe we've known all of these folks for more than 13 years (before a few of them were born!) and being together as a group guarantees lots of laughter and silliness.

In addition to his parents, Patti also took turns helping Cam test out his bowling skills.

After our fill of trying to hit the ten pins, Jane and Chris took Cam to meet up with their second family- Ms. Ann, Katherine & Paul, Molly & Gordy, and Nancy & Don.  We had a most delicious dinner at Outback Steakhouse. 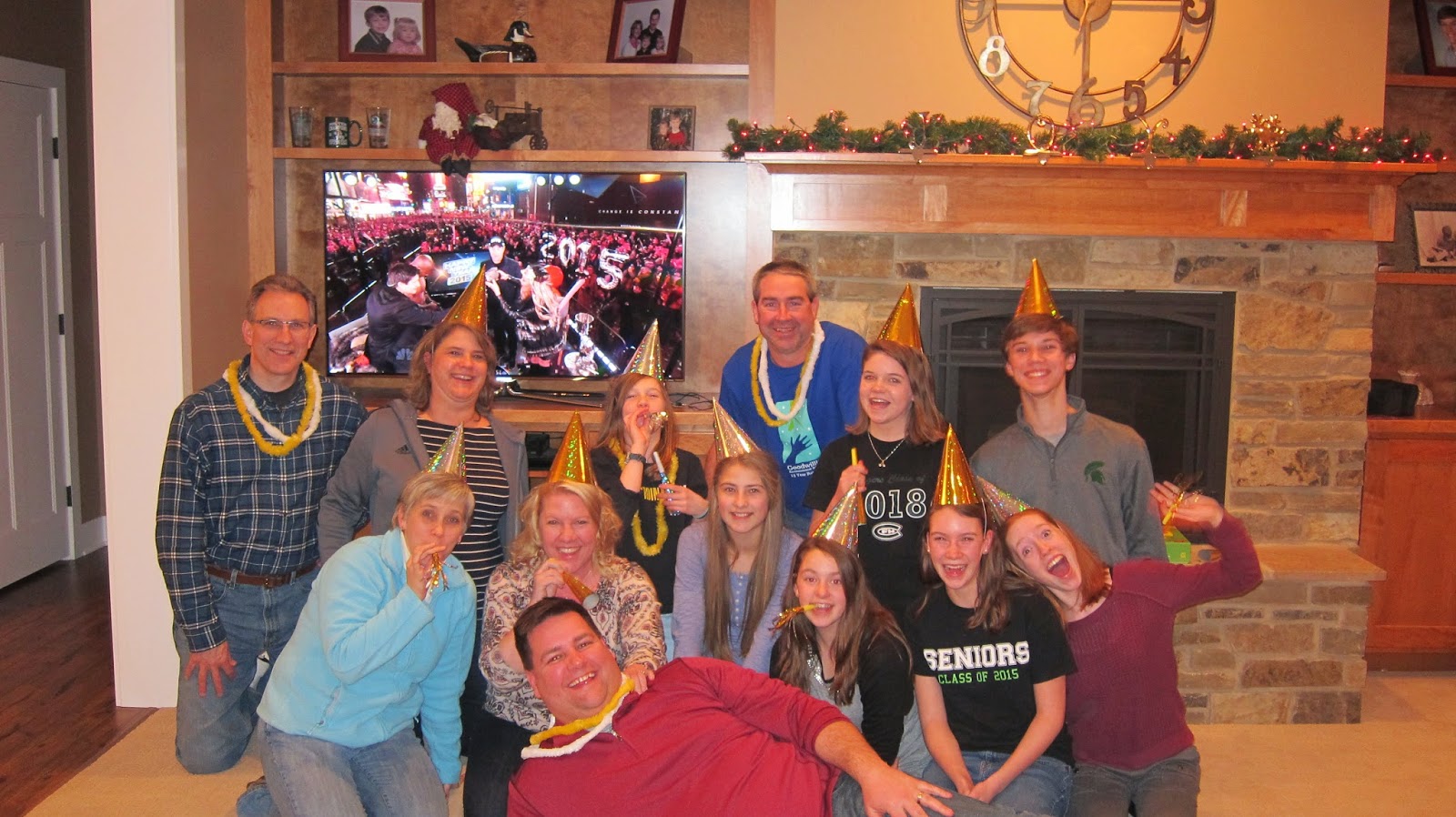 When we asked Cam if he wanted dessert at the restaurant or at home (stopping at Culver's on the way) he opted for an in-home dessert experience with Ms. Ann.  While Cam inhaled chocolate ice cream, his parents went to ring in the New Year with the Raisch's and Flegel's.  Many thanks to Ms. Ann for hanging out with her buddy so he could get to sleep before midnight! 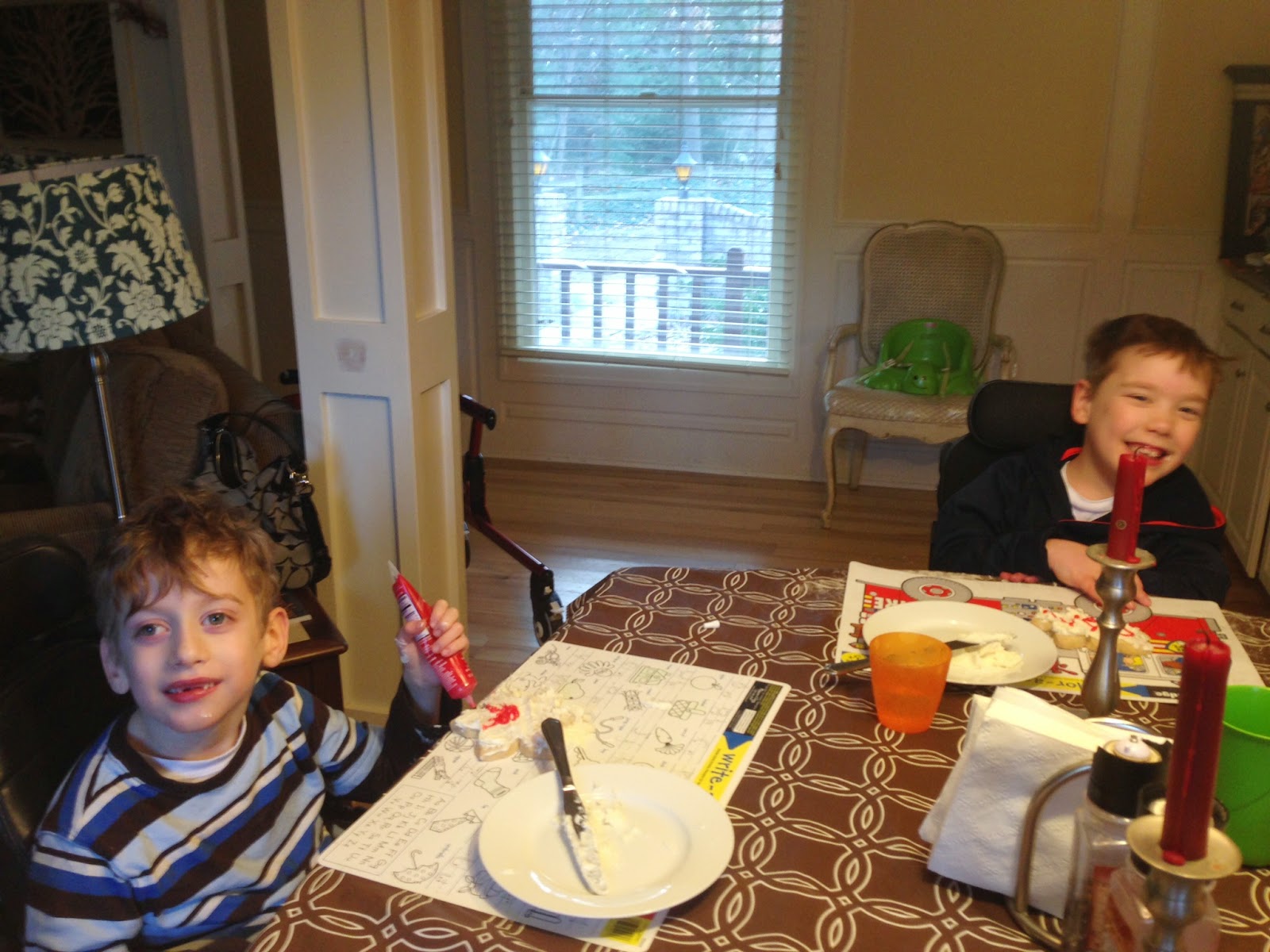 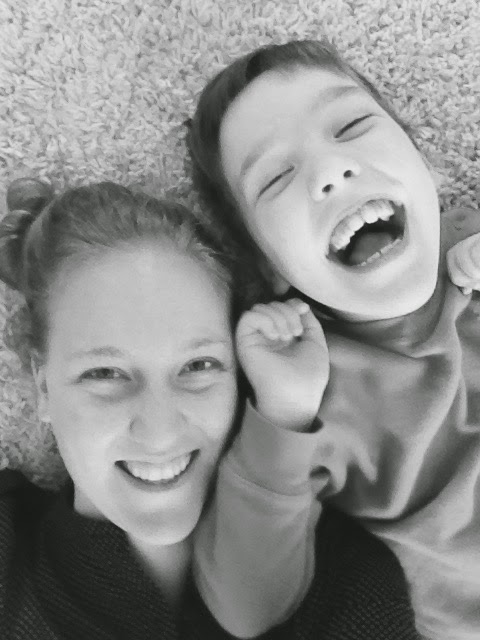 Starting off the new year, we ventured over to Liam's new house to say hello and receive the tour of their home.  Liam couldn't wait to show Cam all around his place!  The boys decorated cookies and then taste-tested their creations.  We're so thankful that for every best buddy Cam has, his parents also have the advantage of gaining such good buddies too.Speaking of buddies, Kelsey had some fun time with Cam over his holiday break!  We're so thankful for her positive attitude, her vocabulary push with Cam, and her constant desire to make play fun and educational at the same time.As we welcome 2015, we hope you all greet this coming year with a smile and a heart full of positive thoughts topped off with lots of laughter.
Posted by Special Moms at 10:53 AM No comments: