What happens when two best friends both have boys? Well, naturally, the boys beco 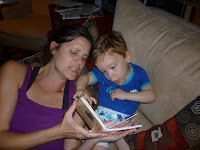 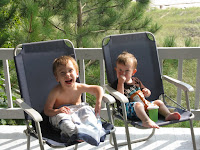 friends too! Cameron had an awesome visit with his best bud, Will and his wonderful godmother, Joanne. The boys played on the beach, in the water, and definitely enjoyed a few snacks together and did a great job sharing them.
Cam and Will also played on Cam's new kid laptop and some of the 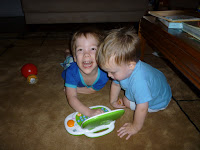 grown-ups were convinced the boys were trying to figure out how to access their parent's email accounts. 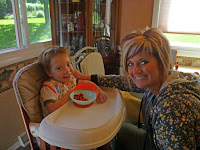 This week was bittersweet for Cam as he said goodbye to his summer nanny, Nikki. We know that she will stop by and see Cameron during the school year, but she had to return to her science students in junior high. Cam loved his playtime and long walks with Nikki and we all can't thank her enough for the excellent care she provided! 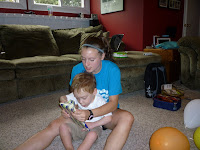 Cam is also lucky enough to spend time some evenings with Sarah. She's a PT student and besides playing with Cameron, also works on stretching and other physical therapy exercises. Fortunately, Sarah will continue to Cam-sit in the evenings.
One more week of summer break before the big boy heads back to school...hope you're all soaking up this beautiful Michigan summer as much as Cam is!
Posted by Chris Weatherford at 9:46 PM 1 comment:

Since Cameron's 3rd birthday celebration began a few days before 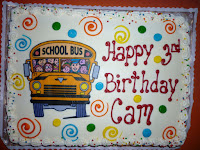 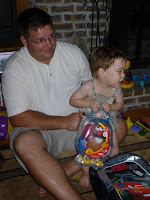 ce this was Cam's first year in school, a school bus seemed appropriate.
Cameron had such fun opening his birthday gifts including a kid's cellphone, Mr. Potato Head, matchbox cars, backpack & lunchbox, bongo drums & books. Cam's parents found a couple additional things to peak his interest- a leapfrog laptop and a tonka remote controlled truck.
Evident of him being a year older is Cam's ability to concentrate and work intently on figuring out new toys. 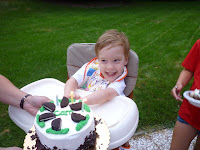 Back in Grand Rapids, the neighborhood joined in for another cake 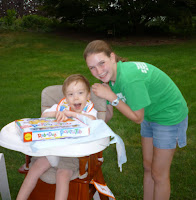 and ice cream birthday fest complete with candles that Cam blew out. The Raisch family gave Cameron a fingerpainting set for the bathtub, pictured here with Anna.
With all of the celebrations and the many family and friends that Cam was lucky enough to see this week, we all realized a very important lesson...The best gift of all is being surrounded by so many loving people that Cameron has in his life!
Next week, see Cam and his best buddy Will hang out together...
Posted by Chris Weatherford at 11:06 PM No comments:

lowers that Chris brought home to commemorate the occasion.

On Thursday, cousin Coco made a special trip to Grand Rapids to pick up Jane & Cam and bring them back to the cottage. It was the

Haroldson's last night at the lake. Chris surprised the family by showing up later that eve to say goodbye. Cam is pictured modeling a shirt that the Haroldson family found for him during a trip to Prague...for anyone who might be headed there, it's incredibly difficult to find kid sizes.

Cameron was most fortunate to begin his birthday 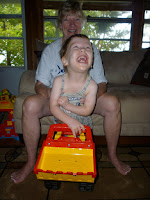 celebration early by opening a gift from the Haroldson family- Auntie Jay Jay, Unc Jeff, James, Libby, Katie and Coco, as well as Unc Mike, Unc Kevin, and Unc Eric presented their cousin with a major cool Tonka front-loader truck. Cam can't wait to play with the big truck on the beach!

Another outing included Cam, Grandma, and Jane taking a trip to Country Dairy in New Era. It was such a hot day and Cameron was a trooper as ice cream and other goodies were purchased. As a special treat, Cam enjoyed a most delicious chocolate shake on the ride home.

Foolishly, Grandma and Jane thought they would be tasting the majority of the chocolately goodness, but Cam had decided that since he was almost 3 years old, he could most definitely handle such

A family gathering of Cam's Aunts and Uncles took place on Saturday at the cottage. Stay tuned for next week's blog to see the 2 special Bday celebrations that Cameron was lucky enough to have!
Posted by Chris Weatherford at 10:09 PM No comments:

Cameron was invited to a special occasion this week, cousin Meg's wedding. Jane drove up to the family cottage on Wednesday, so

Chris and Cam had a couple of boy's nights to themselves. On Friday, the family was together again and had a busy so

cial calendar.
The Huey family enjoyed an afternoon and evening on Lake Michigan and it was so much fun for Cam to see his friends, Sarah & Matt and their parents, as well as new friends Tim & Stephanie.
The big wedding event was on Saturday. The

beautiful event took place at Meg's family cottage and the reception was held at the Peterson family barn/corral.

With every Jellema family gathering, there are always so many cousins to hang out with. Cam is pictured with his cousins Libby, Katie, and Coco- three beautiful sisters who adore receiving kisses from Cam.
Cameron also liked sharing a toy with his sweet cousin, 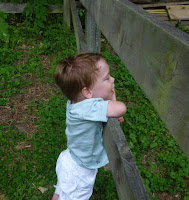 Harry. It's easy to see why Cam looks up to Harry- what great manners he has!
It was a long day for the big boy and Chris and Jane cannot thank Grandma and Grandpa enough for all their help and assistance with the busy days.
It seems that Cam may be contemplating his own future here against the fencepost...definitely looks like a bright forecast ahead!
Posted by Chris Weatherford at 11:16 PM No comments:

Grand Rapids Township Park was the setting for Chris' company picnic. It is a family event a

there are always crafts and entertainment. Since there is a great playground right in the park, Cameron had a good time playing on all of the different equipment.

Jane had a special treat over the weekend when her best friend from 8th grade, Leslie, traveled to Michigan with her husband, Dan and two girls- Erin and Alison. They

rented a cottage on Lake Michigan within walking distance of Jane's family cottage. Leslie and Jane had not seen each other in 16 years, so it was pretty exciting to reconnect. Cam loved the

girls and both families

enjoyed hanging out at the lake.

As promised, it will be much less than 16 years before they all gather together again!
Posted by Chris Weatherford at 7:59 PM No comments: