The Three Laws of Robotics: 1: A robot may not injure a human being or, through inaction, allow a human being to come to harm; 2: A robot must obey the orders given it by human beings except where such orders would conflict with the First Law; 3: A robot must protect its own existence as long as such protection does not conflict with the First or Second Law; The Zeroth Law: A robot may not harm humanity, or, by inaction, allow humanity to come to harm. ~Isaac Asimov
For Cam, 7th grade equals new opportunities and experiences.  Besides being in a different school building and meeting new teachers, one of his classes he thoroughly enjoys is Robotics.  Mr. Z currently has our inquisitive son controlling a robot from the iPad with a joystick app.  He practices daily for an upcoming maze challenge. 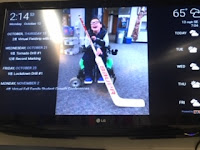 Cam's physical therapist at school travels to each of the buildings in the district.  Ms. Michelle snapped this pic of the screensaver for the day at the 5/6 building where Cam attended the last two years.  The photo was taken upon returning from a field trip to see our local hockey team, the Grand Rapids Griffins, conduct a practice.  A couple of the players walked outside afterwards, saw Cam, and asked him if he wanted the goalie stick as a souvenir! 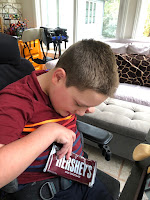 On Wednesday, Cam got off the bus with such a huge smile!  One of his friends at school, Sami, had given him a delicious treat... an enormous chocolate Hershey bar!  Even though desserts are typically reserved for the weekends, this became a rare after school treat for our candy fan the rest of the week.
Saturday, late in the afternoon, we welcomed Liam and his mom, Betsy.  Liam has been schooling from home this semester and the boys have been buddies since pre-school.  They share similar tastes in shows and movies.
The feature flick was an animated 2019 movie called "Spies in Disguise."  The boys requested popcorn and had a good laugh when Jane accidentally added pepper to the theater treat instead of salt!  Cam's mom told them that maybe she was trying to start a new trend.  Apparently, the movie was pretty funny since the two buddies were laughing quite a bit. 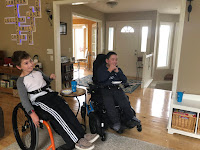 After dinner, Liam's mom made a fancy dessert that was super easy to prepare:  cut-up apples with warm chocolate sauce and caramel sauce drizzled over the tasty fruit. 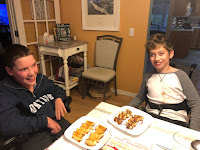 We don't see friends too much anymore with everyone being cautious to stay healthy.
On a positive note, the typical fall colds and illnesses haven't infiltrated our home just yet.  And you know what they say about apples... "an apple a day keeps the doctor away."  We wonder if that included the chocolate/caramel addition.

Camology Quotes:
MI-UCP, Michigan United Cerebral Palsy interviewed Cam and Jane over the summer, along with many other folks.  They will be posting the interview at some point, but the 1-minute commercial for their website was sent over this week.  Cam declared it was a very good video.
"Wow, Mom.  That is pretty cool to see our pictures in this!"  MI-UCP Video- click here
Posted by Special Moms at 5:34 PM No comments: 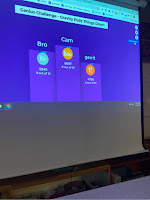 SMS (short message service) or "text" messaging was used for the first time on December 3, 1992.
Neil Papworth, a 22-year-old test engineer for Sema Group in the UK, used a personal computer to send the text message "Merry Christmas" via the Vodafone network to the phone of Richard Jarvis, who was at a party in Newbury, Berkshire, which had been organized to celebrate the event.
Today, one of our most common forms of communication is via text messages.  It is immediate and can be accomplished by typing versus talking.  As technology has progressed, you are now able to send an audio message via text.  Cam can record a message and then send it instead of typing it out on his iPad.  This has led to him being able to keep in touch with friends outside of school.  It also provides a quick, easy way to send information and allows someone to hear him lol (laugh out loud!) via his voice. 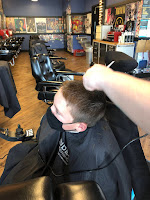 This week at school Cam beat out his buddies in a Gravity Challenge.
They are quizzed via an online tool called Kahoot! and the top three scorers are shown.
On Saturday, we ventured over to Brody's be Cafe to munch on some tasty Chick-Fil-A for lunch and met up with Auntie Jo.  She gave Will's phone number to Jane so that Will and Cam can send messages to each other as well.
Later that afternoon, for the first time since March, Cam entered the Jude's barbershop for a haircut.  He was a bit apprehensive but seemed very surprised that he was the only client there at his scheduled appointment time.  Ashley did a great job and Cam declared he would definitely go again when he needed his next trim. 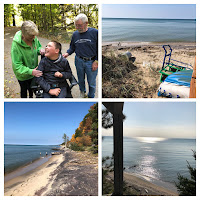 Sunday was reserved for some grandparent time at the cottage.
We arrived in time to enjoy a fabulous brunch of a tasty homemade feast including an egg sausage casserole, delicious blueberry muffins and fresh fruit.  With full bellies, it was time to get to work.
Chris finished installing new lighting on the boardwalk.  It took two different trips but the improvement was needed.
Cam played cranium games with Oma as they answered different questions about all sorts of things eliciting laughter that could be heard from outside. 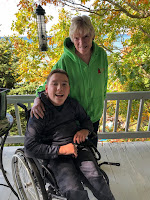 Jane worked on putting some things away on the beach and marveled at the beautiful fall foliage.  This weekend was considered the peak for the colorful leaf display in October.
We never get tired of that Lake Michigan scenery and the time always goes by much too fast.
As we watched the sunlight glitter across the lake and the trees, it reminded us of the saying, "Autumn paints in colors that summer has never seen."

It has been noted that Cam has a technology gene.  It seems to become more apparent the older he gets.  This week he was helping Chris set up a new home server.  Cam's dad indicated he would go downstairs and grab the server so they could get started.  His son's response: "Dad, can't you just remote in?"
Posted by Special Moms at 11:03 PM No comments: 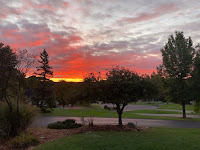 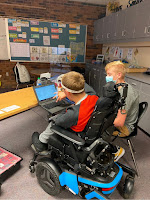 Luckily for Chris and Jane, Cam seems to almost always wake up on the right side of the bed.  He is typically happy, ready to get the day started and anxious to begin an activity. 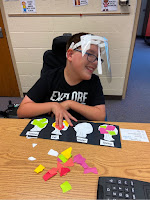 It's fortunate that Cam is able to be motivated before the sunrise, especially since his school bus arrives at our driveway the earliest ever...at 6:30am.  And he is not the first kid on, he is actually the third.
With school in full swing now, everyone is required to wear a face shield or mask.  Remembering these new accessories is similar to not forgetting your shoes. 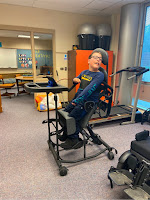 Along with standard learning that takes place, Cam also receives physical therapy, occupational therapy and speech therapy.  His PT has known him since kindergarten!  Ms. Michelle works with Cam on stretching, standing, walking and bike riding.  She has always told us that he attempts every challenge put before him.
The weekend brought cooler weather and rain on Saturday.  We spent some time with Oma and Opa at the cottage for the afternoon.  Even though we didn't have beach time, the family time was even better. 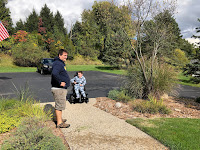 On Sunday, Chris and his son worked on some outdoor projects as the preparation for the transition of seasons has begun.

We were excited to see a double rainbow later in the afternoon.  After  a bit of research, we discovered that they occur when white sunlight is reflected twice in the raindrop.  It means you can see two different reflections coming from different angles. 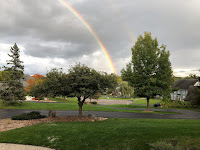 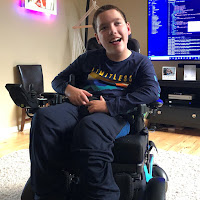 Cam was explaining to his parents that someone brought in donuts for a class treat on Friday.  Chris was teasing Cam about needing to pay him a visit at school sometime.  Typically Cam knows when his dad is joking, but just in case, his response was equally as sweet as the fried pastries...
"We will have to get donuts tomorrow, Dad.  I can hear the disappointment in your voice!"
Posted by Special Moms at 5:23 PM No comments: