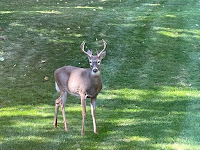 “My advice to other disabled people would be, concentrate on things your disability doesn’t prevent you doing well, and don’t regret the things it interferes with. Don’t be disabled in spirit as well as physically.” ~Stephen Hawking
“A hero is an ordinary individual who finds the strength to persevere and endure in spite of overwhelming obstacles.” ~Christopher Reeve

An advocate is defined as a person who publicly supports or recommends a particular cause.  To advocate for someone is to "support or argue for."  Since Cam was in grade school, his teachers have always urged him to speak up when he feels something needs to change or things should be handled differently.  It's taken some time, but our 9th grader doesn't hold back anymore when he realizes if he's not vocal for himself, no one else may be. 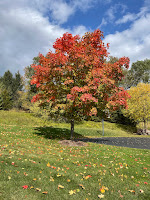 This week, Jane attended parent/teacher conferences at the high school.  Cameron supplied a verbal list of things his mom needed to bring up.  One: "The handicap doorway I drive through in the morning after getting off the bus doesn't stay open long enough for me to drive through."  Two: "I would like things to work on every day after school with my tutor, Ms. Ann."  Cam did bring these up to his teacher which was confirmed during the time Jane had with her.  Cam's primary teacher told his mom she was impressed with his comprehension and daily schedule adherence.  She pointed out some things we can work on at home and talked about Cam's thankful manners and how much they are appreciated.  Jane's mom deemed it a successful meeting and gave her son a full report upon arrival home. 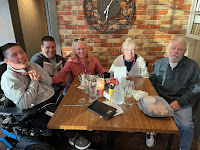 Saturday afternoon we had set aside time to meet up with Oma and Opa in Grand Haven.  After attending to a few things, we ventured out for an early dinner.  We tried JW's near downtown due to the favorable online reviews.  The entryway was a bit problematic for Cam and not very accessible, but the food was tasty. 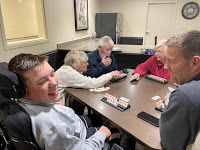 After our leisurely meal, we headed back to Rosy Mound.  Upon arrival, we all met up in the community room where another resident, Betty, was looking for others to play Rummikub with.  None of us had even heard of the game so it took a bit of time before we all finally acclimated to the rules and strategy.  We had such a fun time learning something new and rooting each other on.  Betty ended up winning and we all agreed we would need a repeat match another time. 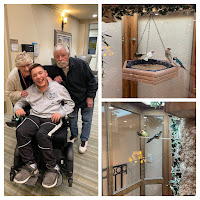 Prior to heading out, we took the elevator to the second floor.  Cam's grandma wanted her grandson to see the bird aviary located there.  It is a beautiful cabinet containing a dozen or so colorful small birds. Their chirps are quiet and they each have a tiny house within the cabinet along with greenery and other foliage.  The birds seem very content with their glass-walled home.

As we made our way to the exit, we thanked Oma and Opa for hosting us.  Every time we are there, it's a different experience and upon leaving, Cam always asks when our next visit will be. 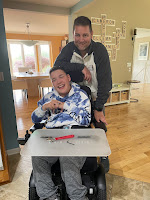 Sunday was our day to relax and work on home projects.  One request from Cam's teacher was to send in a tray for Cam's powerchair to school.  Jane explained at the conferences that we had one but since the adjustments to Cam's chair, it no longer fit.  Of course, that didn't stop Chris and his son from completing some modifications to the existing one by removing the hardware and repositioning it.  Then, as a final task, they sanded the tray to remove the harsh surface where the bolts were in place previously.

Once again, Cam and his dad completed the task in what Jane considered record time! 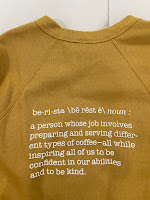 Friday was a half day of school for Cam, so Jane took the afternoon off of work.  Mom and son finished lunch and then got on the road.  They stopped at Heidi's farmstand and then made their way to Brody's Be Café. Cam was able to watch and listen to Rachel interviewing a potential employee with special needs for one of the berista positions.  Cam talked about it on the drive home.
"She did a good job answering questions.  I don't think she liked that her grandma was trying to answer for her.  I hope she gets the job!"
Posted by Special Moms at 7:51 AM