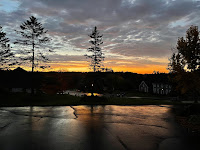 "To be yourself in a world that is constantly trying to make you something else is the greatest accomplishment." ~Ralph Waldo Emerson

Everyone has an identity... "Didn't you live in the house on the corner?" "Are you Stacy's sister?" We are all known as "someone" and oftentimes it is due to someone else. From the time Cam began his schooling and engaging in community work, Chris and Jane became known as "Cam's Mom" and "Cam's Dad" versus people knowing their first names. When we go to the store or out to dinner we'd inevitably hear "Hi Cam!" followed by "Oh you must be Cam's Mom and Dad!" 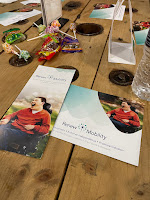 We had given the non-profit organization Renew Mobility our (formerly Alternatives in Motion) permission to use Cam’s pictures. On Wednesday evening, we were slated to attend the 3rd Fundraiser for Renew Mobility at the Fowling Warehouse. Fowling is a hybrid game that combines the equipment of American football and bowling into one sport with a similar layout as horseshoes and cornhole. Renew Mobility provides mobility equipment to anyone who needs it and the fundraiser was appropriately named “Fowling to Keep 'Em Rolling” in honor of raising money for equipment repairs, etc.  When we arrived, every reserved table was adorned with candy and brochures that depicted a familiar kid on the front! 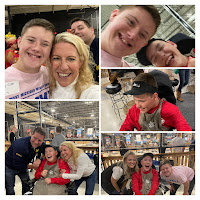 Cam's best bud, Brody and his mom, Jenn joined us.  Brody agreed to be a costume judge as did our favorite local news anchor, Tessa.  Jane and Tessa are both on the board of directors for Renew Mobility.  There were raffle tickets sold and Chris and Jenn both won some prizes.  Cam chose to dress up a "be-rista" from Brody's be Café this year.  Brody wanted to present Cam with the top costume prize, but we all agreed it was a conflict of interest. Everyone had a great time and we even played a bit of fowling.  Brody borrowed Jane's phone and had fun snapping some selfies! 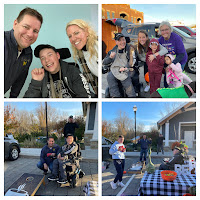 On Friday, we were scheduled to volunteer with Brody and his dad at the Pumpkin Prowl.  This event was organized by the Ada Business Association and DiscoverAda.  More than 50 businesses opened their doors or created a parking space setup for their biz to pass out candy.  The social district was also available for adults to grab a cocktail-to-go at one of the many restaurants.  The local police and fire departments were on hand and there were more than 1000 kids expected.  We brought over a cornhole game which was extremely popular with the kids and kept us all busy.

Ms. Ann, along with her daughter, Katherine and her family all stopped by to see us!  Katherine was Cam's nanny for more than 3 years when he was younger.  It was so much fun to see her kids and check out their dinosaur costumes.  We also saw one of the former PT students who Cam used to work with- Ms. Kelcie and her little ones were excited to meet him.  The teacher who taught summer school ran right over to our son when she spotted him.  The sunshine felt warm until the sun went down.  We ran out of candy at 7p and promptly packed up our area.  We all may have been a bit thankful since the chilly evening had us feeling a bit frosty. Saturday was slated to be another sunny day.  We loaded up the van and drove to Oma's for a quick stop to drop off items and fix their printer.  Then we were on the road again to see our cousins.  Lake Michigan didn't disappoint with the glimmering sunlight dancing on the water.  Cam brought his old Elmo treat bucket to Calla so she would be ready for Halloween.  Dinner was delicious and relaxing due to Coco and Jane dividing up the meal prep.  Since the sunsets are much earlier now, we were able to see the beautiful hues along the horizon disappear before we headed back to Grand Rapids. 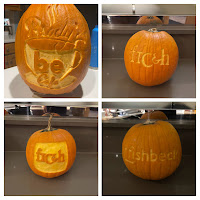 Pumpkin carving was in full force this week to decorate the office where Chris works and the non-profit Café we love the most.

Even though Chris and Jane are widely known as "Cam's Mom" and "Cam's Dad" respectively, it is a moniker for which they are very proud and most thankful for.

Chris had to work later one evening this week and called Cam to say goodnight.  Before signing off, Cam's dad told his son, "Good night, young sir" to which his funny teenager responded: