"Take away the cause and the effect ceases." ~Miguel de Cervantes

On a daily basis, we take so many things for granted.
Walking up steps, moving around a barrier, squeezing through a tight place... and the list goes on. In the 1970s electric operators for sliding and swinging doors were introduced, as well as motion detectors to activate sliding doors. The low energy swing door concept and the first handicapped access door operator were also introduced in the 1970s.

Due to Cam's insistence and avocation, the handicap buttons for the doors at the high school were fixed this week and he was so happy and relieved. 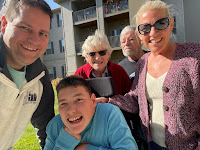 We made it to the weekend and had quite a bit planned for Saturday.  After packing a lunch, we traveled to Oma and Opa's in Grand Haven.  It was breezy, but the sun was shining so we opted for an outdoor dining spot in their courtyard.  It is so serene and peaceful.  We had a great visit for a few hours and then continued northward. Our stop at the Haroldson cottage was also met with abundant sunshine.  We sat outside admiring the beach and Lake Michigan for the remainder of the day.  The appetizers were plentiful and the conversations continued until it was dinner time.  We had pre-planned a dining experience in town at a place we hadn't tried before called Oh Brothers.  We all met there and found it to be quite busy.  After a thirty minute wait, we were seated and enjoyed a great din with cousins Coco, Max, Calla and Eric.  It was after 9:30p when we arrived back home in Grand Rapids but the later drive was definitely worth it! 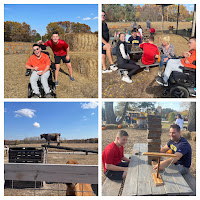 Sunday afternoon was reserved for a visit to the pumpkin patch at Deep Roots Produce not far from our house.  We were so happy that Brody's family could meet us there too.  Not only did the area include a sprawling patch of pumpkins, but there were also goats and alpacas to pet and feed, produce for sale and a mini donut food truck.  We explored the entire patch and each family picked out multiple pumpkins.  Jane bought some produce and the kids shared mini donuts.  Once again, we were blessed with the sunshine and mild temperatures.  Stay tuned for some expert carving!

Cam likes to watch the news and is especially interested in the traffic and construction.  Every time we drive to see Oma and Opa, he will explain, in great detail, what upcoming orange signs we will be seeing and alternate routes we could take.  Jane told him he sounded like a "back-seat driver." To which he responded:

"What is that?  Does it mean I am in driver's training?"