“The advance of technology is based on making it fit in so that you don't really even notice it, so it's part of everyday life.” ~Bill Gates 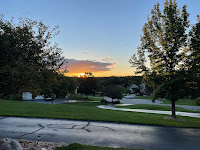 Matt Mullenweg said that "technology is best when it brings people together."
Nearly 4 years ago, Cam talked to his mom about the need for Dean Transportation (his school bus company) to have some kind of app so we would know when the bus is about to arrive.  After multiple phone calls at different times, we were always told that the bus company wouldn't be able to invest in the application due to funding.  As you can see from the picture taken outside of our front door, we have a very long driveway.  This week, much to our surprise, Cam's bus driver handed us a sheet of paper with instructions to sign up for a free app called "Here Comes The Bus." Dean Transportation had purchased a package to use the software.  It was difficult to tell who was more excited about the news, Cam or his mom! 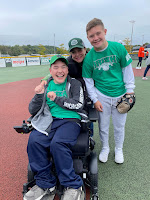 Friday was a half day of school for our freshman, so we had pre-scheduled a wheelchair parts repair for the afternoon.
Saturday's plans included a day with Brody, Cam's best buddy.  Brody was dropped off around 9am and the boys were scheduled for an 11am WMML baseball game.  The weather was rainy in parts of Michigan so we had a few Cam Fans cancel out. 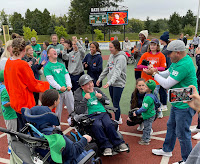 The first fan to arrive was Stephanie, a para-pro aide the boys had in school from 5th grade through 8th grade.  Needless to say, the freshman buddies were excited to see her. 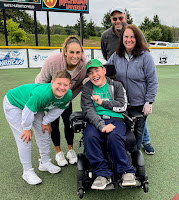 With each game, the lineup is changed and the coach will determine who is last up to bat.  The final few batters who round third base and head for home are greeted with a makeshift person tunnel to cheer on the kids.  Coach Mark placed Cam at the end and he experienced the human tunnel as he made his way to home plate.  The pure joy on Cam's face was matched by his best friend cheering him on!

From elementary school, Ms. Cris (an aide in the boys' classroom) and her family attended the game too.  Cris' daughter, Mary Jo, has hung out with Cam multiple times over the years.  Mary Jo even took Cam and Brody to the Lowell Fair before.  They continue to come out to a game to cheer on these guys every year. 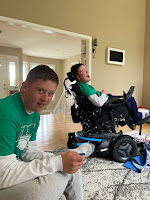 The baseball game ended at 12p and there was an earlier request for a Culver's lunch.  After Cam and Brody finished their chosen Culver's items, we decided it would fun to watch a movie.
The new Pinocchio movie on Disney+ was the pick.  It's no secret to anyone who knows Brody that the live action Lion King movie is his absolute favorite.
After watching Pinocchio, Disney+ informed us on the screen that since we had just watched our movie, they would recommend we see The Lion King next!  It was a good five minutes before we could stop laughing.
We said goodbye to Brody before dinner and settled in for the evening. 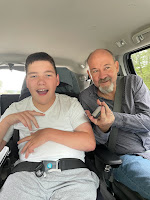 Jane drove over to the airport after Cam was in bed.  Cousin David flew in from Texas and was staying with us for the night.
Sunday afternoon, we all traveled north to drop off David at his cottage.  He and Cam had a nice ride talking about life and listening to some of David's clarinet and trumpet music from his band.
We visited more cousins after the drop-off before heading back to Grand Rapids early.  Cam never forgets to remind us when it is a school night and when his nightly routine should begin.  Even though his parents are bound by their own work schedules on a daily basis, we always tell our punctual son that he truly has an "internal clock" that works overtime. 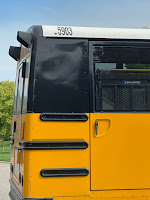 The "Here Comes The Bus" application proved a bit challenging to set up.  On the sheet of paper it indicated that Cam's student ID would be used to register.  Jane inputted the number and it wouldn't advance to the next screen.  Cam was convinced he knew why.
"I.T. is blocking it, Mom, because it is my student ID.  You can't authenticate it."
As it turned out, Jane neglected to turn the sheet over where a different ID number was shown specifically for Cam.  She did confess her self-inflicted frustration to her son and told him why it was important to look at things more closely, especially when in a rush!
Posted by Special Moms at 7:16 AM