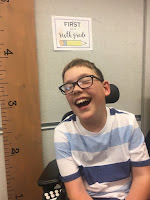 "The only thing better than singing...is more singing." ~Ella Fitzgerald 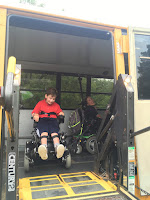 It's hard to believe our son began 6th grade this week.  He chose choir over an instrument and thoroughly enjoys his take on singing.
Another bonus is the addition of one his friends since preschool, Liam, being added to his bus route on the way home.  These two longtime buddies get to ride next to each other and chat on their daily return trip.  Apparently, Cam has also been requesting a play date time from Liam's mom, Betsy, every day at drop off. 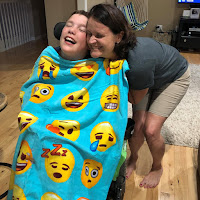 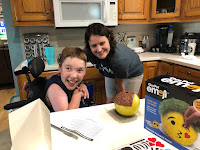 Another unexpected surprise was seeing Auntie Jo and receiving a couple of birthday presents.  We all marveled at the emoticon Chia pet.  Chris, Jane and Jo all explained to Cam that none of them had ever had a cool chia creation when they were younger, even though they had all seemed to want one at some point.  Auntie Jo and her godson went to work, following the directions to plant the seeds and wait for growth.  Following the emoticon theme, Cam opened a new beach towel from his godmother before the night was over.
Thursday evening, our son stayed up 'late' since Friday was a vacation day from school due to the Labor Day holiday weekend.
We saw a pretty incredible display of lightning luckily without the loud thunder. Cam's parents, however, did not have Friday off of work.  As Jane and her son settled into their 'temporary' offices in the dining room, Cam announced at 9am: "Mom, I would rather be in school."  There was no disagreement on that comment.  Luckily, there was a break in the afternoon and mother and son played a few games. 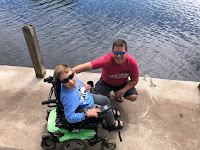 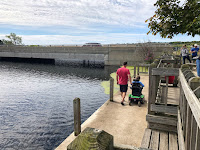 On Saturday, the forecast looked good for a cottage day.  Our first stop was the annual outing to Dog-n-Suds in Montague where we ate outside at a picnic table on White Lake.  Chris and Cam strolled along the river which is the highest level we've ever seen.  Cam thinks it is so cool that you place your order via the microphone and they walk the food and drinks out to you.  And if you want to just stay in your car, the food trays rest on the windowsills.  As our son likes to say it's how they did things "back in the olden days." 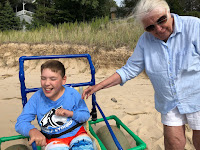 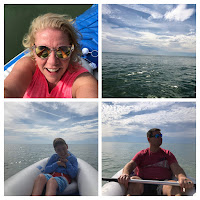 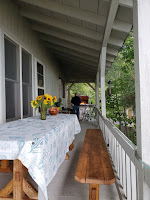 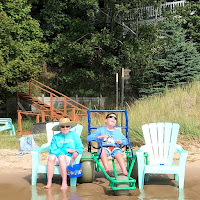 After arriving at Oma and Opa's and settling in, we headed down to the beach later in the afternoon.  The flies were a bit bothersome, so after visiting with Aunt Joyce and chatting about the salsa we would make with the garden tomatoes she brought us, we headed out in the kayak.  Cam and his mom took the first ride on the unusually calm Lake Michigan water.  Surprisingly, the water wasn't too cold either.  While Chris paddled around with Jane, Oma and Cam had some time on the beach, right at the shoreline to stay away from the pesky flies.

By the time we headed up from the beach, it was after 5pm and dinner prep was in full force.  Opa prepared a most delicious flank steak for us, accompanied by fresh sweet corn.  Cousin Steff and her son James surprised us during the tasty meal. 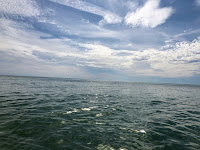 Labor Day weekend is typically considered the last beach days of summer and the big lake didn't disappoint.
Watching the sunlight sparkle on the clear water, seeing the boats pass by, and the clouds moving across the sky melding into different shapes provides some of the most relaxing entertainment around.
It's easy to understand what pulls us to the shore most every weekend and why the summer days are so precious and memorable. 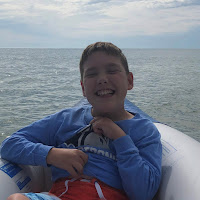 Camology Quotes:
Those who know Cam realize pretty quickly he is a routine kid.  He likes a schedule, appreciates upfront knowledge, and is known to his parents as a "human calendar" reminding them to do things they haven't even written down, but only mentioned in passing.

"So, do you want to have watermelon instead of strawberries for lunch?"
"I'll just stick with my classic!"
Posted by Special Moms at 10:38 AM