We're in Michigan, not Kansas - Week of Sept. 9th 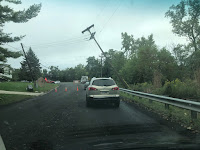 Wednesday evening, Sept. 11, Chris and Cam were playing the Xbox while Jane was tending to household chores. Cam asked what a noise was to which his parents replied "probably something at the neighbors." Suddenly, Chris looked at his phone, turned off the Xbox, switched to the local channel and we all saw a tornado warning on the tv! That was a first for us. Looking at the radar, we saw it had already passed by us and we told Cam the 'noise' he heard were the tornado sirens, which incidentally we've heard possibly twice in the last 10 years for testing. Cam thought the entire experience was exciting and said to us, "I thought I had done something wrong because Dad turned off the Xbox! He just wanted to look at the tornado stuff!" Cam and his mom surveyed the damage the next day and it was quite extensive just a few miles away. The National Weather Service did determine, however, that it was straight line winds and not an actual tornado. 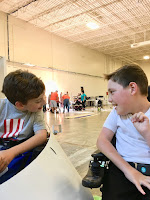 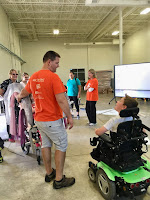 Friday evening, we readied our supplies for Saturday morning. We were holding our very first “Community Day Build for Halloween Heroes” to create wheelchair costumes. Our friends at Grand Valley State University donated a large space for us to use on Saturday and we all met up at 9:30a at the GVSU Innovation Center. We had 5 kids signed up and we couldn’t wait to get started. Cam is our designated consultant, providing input and feedback as well as acting as greeter for our families. 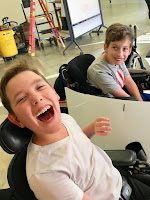 One of our participants was none other than Cam’s good buddy, Liam. It turns out that Liam is a huge fan of Star Trek and determined his costume this year would be the U.S.S. Voyager. We found pictures on the internet and he chose the ones he felt most closely resembled the spaceship. The best part of Community Day is that the families are able to transport the costumes home and finish any painting, embellishing, etc. that couldn’t be finished during our time together. 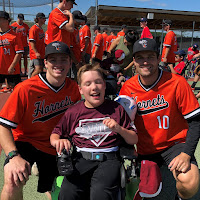 After Cam and Liam ate a quick lunch, it was a bit past time for Jane to transport her son to the WMML field.
She was definitely wishing teleportation was a real thing. Oma and Opa were already there. Jane quickly called Oma and asked if she would find Coach Nicole to let her know we were running a little late and Cam would need to be last in the batting lineup. Oma and Opa led our cheering section when we arrived. 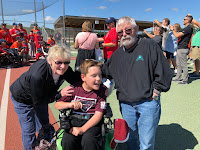 The volunteers were the Kalamazoo College Hornets, Men’s Baseball team. They were absolutely stellar! The guys did a great job involving Cam in every single play. And then, we realized Cam would be the very last batter of the game and the bases were empty.  After using the batter box, he began his journey around the field.  When he passed 3rd, the Hornets and everyone in the stands started cheering him on as he made his way to home plate.  The video shows Cam's pure joy and excitement.  He exclaimed immediately afterwards..."That-was-AWESOME!"

Camology Quotes:
Cam sometimes has the unique ability to accidentally 'predict' an outcome and the not-so-unique ability to chat about a topic seemingly all day long.  Thursday evening's intense storm led to 2 predictions and multiple discussions...

Regarding the tornado warning:
"I don't think we will have school tomorrow!"
"You know what?  I think when I see Mr. Patrick at PT (physical therapy) he will say 'a lot of my patients canceled today because of the weather' and I think that will happen."  (confirmed upon questioning receptionist at walk-in to said appointment on Thursday evening)
Regarding the multiple discussions:
"Did they open the police station and fire station to people who needed shelter after the storm?"
"What did the tornado sound like?"  (note- we were all in the same room when tornado warning occurred)
"Mom look at the news- oh my goodness!  That is the power line we saw!  Will it still be down tomorrow?  Where will my school bus go?  Did they give my bus a new route?"
Posted by Special Moms at 9:28 PM