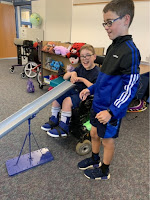 "Accept the challenges so that you can feel the exhilaration of victory." ~George S. Patton 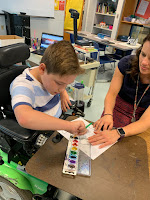 To the victor go the spoils.  An odd phrase until you research its meaning...
During a Congressional debate in 1831 a New York senator, William L. Marcy, used the phrase "to the victor belong the spoils." This saying accurately described the spoils system of appointing government workers. Each time a new administration came into power thousands of public servants were discharged and members of the victorious political party took over their jobs.

At school this week, Cam took on a few jobs of his own.  He created some colorful art with Ms. Konkle and utilized a bowling ramp to play a game with his friend, Ethan. 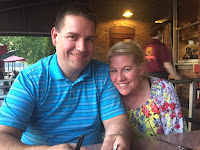 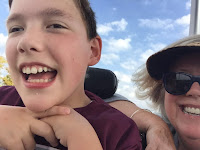 Auntie Karen arrived at the end
of the week to attend Cam's ball game on Saturday.  Friday night, Ms. Amanda had a surprise evening with her buddy, while the trio of Cam's parents and Auntie Karen had dinner in Lowell. 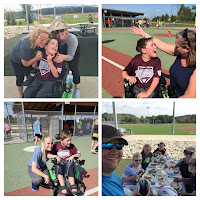 Saturday morning, we were all on the move again on our way to the WMML field in Rockford.  The announcer dubbed our son "Cam the Man" during his intro based upon the fact that the cool video of Cam bringing in the last run the week before had garnered over 4,000 views online.  The Hope College Girls Basketball team volunteered this week and Ms. Barbara, Cam's former teacher, arrived to watch the excitement, along with Oma and Opa.
It was a breezy, warm afternoon and we had decided to bring a picnic lunch for after baseball.  The canopied tables in the playground area make a perfect spot for dining. 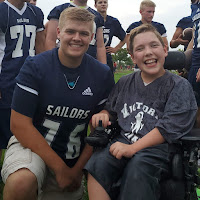 After eating, we said goodbye to Cam's grandparents and Auntie Karen and thanked them for coming as they all began their trek home. 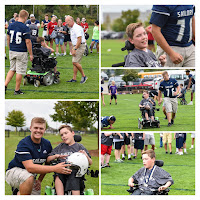 Chris and Jane also took headed back to their abode, but only for a short time.  About a month ago, Ms. Amanda's future mother-in-law, Mary W., let us know about a program called Victory Day at Ms. Amanda's alma mater, GR South Christian High School.  We signed up in August and the time certainly flew by.  The goal is to match a person with different needs and abilities with a high school football player.

When we arrived, Cam was paired up with Anthony, a junior on the Sailors team.  Our boy was given a jersey to wear and the two guys chatted.  Everyone in the bleachers made a "tunnel" on the field for the 20+ participants to go through.  Then, it was time to patiently wait as each person paired made their way in the lineup. 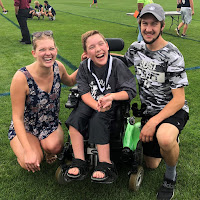 When it was Cam's turn, Anthony handed him the ball and expertly stayed beside him.  As they made their way down the field, the junior varsity players continuously attempted to tackle Cam.
They made it to the end and everyone yelled 'Touchdown!' and the marching band played each and every time the end zone was reached.  After all of the players had made a score, an award ceremony complete with medals was presented to every person who participated.  The cheering section of Ms. Amanda and Nick, Nick's sister Brooke and their mom, Mary, along with Chris and Jane made for some noisy bystanders.  The rainstorm held off and as we watched Cam smile at Ms. Amanda, we are reminded of how many connections we have because of the many people we hold so dear.
As Pubilius Syrus said, "Where there is unity, there is always victory."
The unified group on the field proved just that! 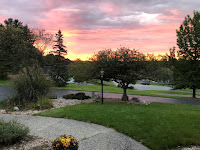 Camology Quotes:
We have had some unusually warmer days, opening the windows and doors.  And we've witnessed the sun coming up in the morning with some pretty vibrant colors.
Sometimes, the occasional insect will enter our home.  At bedtime one evening, Cam announced:

"No flies in my room please, batten down the hatches!"
Posted by Special Moms at 4:23 PM