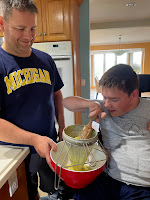 "I want to fill a jar with a lot of clapping, and sell my applause next to the applesauce in a grocery store. You can eat the praise you didn't earn, but did pay for."  ~Jarod Kintz

Ever since Cam began eating different foods as a baby, he has had the privilege of partaking in the most delicious homemade applesauce in the universe.  Perhaps Jane is a bit biased since she has also eaten it as far back as her toddler years. Oma learned the art of making applesauce from her mother and the tradition has passed on. Applesauce-making was a multi-night event in our home this week. The ingredients include early transparent apples, sugar and a chinois strainer.  A chinois (English pronunciation: shin-wha) is a conical sieve with an extremely fine mesh. It is used to strain custards, purees, soups, and sauces, producing a very smooth texture. It can also be used to dust food with a fine layer of powdered ingredient. Chinois is a loanword from the French adjective meaning Chinese. French cooks call it this not because this kitchen tool comes from China, but because it resembles an Asian conical hat, also known as a rice hat. 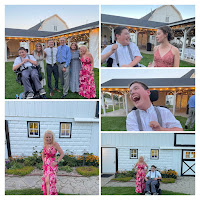 This week we welcomed Johnny's family (Dave, Vy, Drew and Jack) into our home for the impending wedding of their son, Johnny. 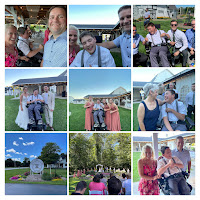 Sarah, our good friend and neighbor was set to marry Johnny on Friday afternoon at Post Family Farm.  That afternoon, Cam's parents left work early for this festive occasion.  The weather couldn't have been better since there was no humidity and the temps were very mild.

The Raisch sisters looked beautiful as bridesmaids and Sarah was a stunning bride. Johnny and his groomsmen were equally handsome with leather suspenders.  Cam was sporting his own suspenders that he originally wore for Ms. Amanda's wedding and continues to showcase them.  After dining on delicious food from Mission BBQ, the heartfelt speeches were one of the highlights.  Fresh donuts were available for dessert and then the dance floor was open.  Sarah and her sisters have always felt like siblings to Cam. For many years, they all saw each other on a daily basis.  We had great fun dancing and said our goodbyes close to 10pm. 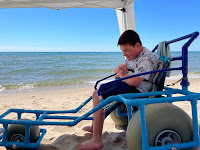 Saturday morning, we said farewell to Johnny's wonderful family as they headed back to NY and we made our way to the cottage after lunch.

The lake water was warmer and we a spent a bit of time relaxing. Later in the afternoon, we left for Grand Haven to visit The Village at Rosy Mound.  We had dinner in the courtyard there with Oma and Opa. 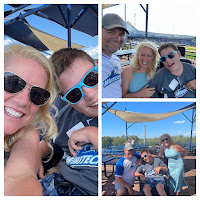 Sunday included another outing, this time to our local minor league baseball field for the Whitecaps Game. This was a planned excursion that Cam thought up for Father's Day. It just so happened that Chris' work had reserved one of the private decks for the Fishbeck employees on the same day.  Not only did we attend the game, but we also were able to partake in free food and drinks. And, the Whitecaps won the game! Spur of the moment ideas can be fun.  After the game, we made an unplanned stop for dinner at Logan's Roadhouse.  It was delicious and almost seemed better since it was impromptu.  Cam's dad remembered that there was a Weatherford street sign right across from Logan's.  Before heading home, we captured a quick picture of our last name, assuming that it wasn't exactly something we could borrow and bring home. 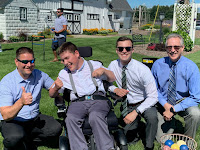 Anyone who has spent time with Chris is aware of his awesome sense of humor. Cam has inherited that gene as well. When Cam's dad continuously tries to make him laugh, he sometimes is surprised when his son calls it out.
"Dad, I have known you for 14 years. I know you are a jokester."
Posted by Special Moms at 9:49 PM