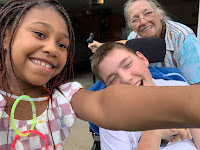 As we all settled into our routine together with Cam's Grandma Sue and Jalayna, our home seemed energized.

Amanda arrived Monday morning to take the kids on a hike through the nature park while Jane worked.  Another daily activity on the agenda was to have Grandma Sue walk down the driveway for exercise with her grandchildren.  Layna opened a "salon" in our living room to do everyone's hair.  Monday afternoon, Cam headed out for his swimming and PT session while his cousin Layna was sad she couldn't go with him.  This was our first FOMO exposure of the week.  The second came Tuesday morning.

Summer school runs from Tuesday through Thursday during the last three weeks of July. The fear of missing out is a strong pull for our teenager. He wanted to stay home with his grandma and cousin, but he also wanted to attend the summer session.  After much discussion and conflicted emotions, Cam decided to make his way to the bus stop.  That afternoon, the cousins were able to visit with a dog named Jada and meet Ms. Amanda's bunny, Ollie.

Wednesday evening, Chris wrangled Cam and Layna into the van for an evening at Dave & Buster's to play games and eat there as well.  Grandma Sue and Jane had a lovely fish dinner at home and chatted away until everyone arrived back home.  At school, Cam enjoyed an outdoor activity after class work inside.  They made s'mores outside using the sun's reflection to provide enough heat to melt the chocolate and make the marshmallow gooey inside. Jalayna and Jane enjoyed some pedicure time Thursday morning and by Saturday, we were ready for beach time! After an early lunch, we loaded everyone into the vehicle traveling northwest.  The trip to the cottage normally takes just a bit over an hour but during construction season in Michigan, our trip was an extra 20 minutes.  Upon arrival, we were all anxious to be on the beach.  Chris and Cam took an unexpected tumble down the boardwalk, but both of the guys were fine after a bit of cleanup.  It was incredibly windy on the beach and a little cooler so Grandma Sue and Cam stayed on the deck with Oma and Opa.  Layna had her first kayak ride with her Uncle Chris.  Dinner on the deck was delicious as we all enjoyed looking out over the water. 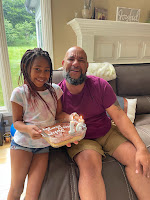 Sunday morning, we busied ourselves cleaning and awaiting Jalayna's dad's flight arrival.  We decorated for his impending birthday party.  His actual birthday was July 15th, but we were celebrating on July 17th.  John, Chris's brother had originally sent his itinerary that noted he was due in at 6:30pm.  However, while Chris and his niece were at the store, John texted that he had landed and it was 4:15pm!  It was a huge surprise when our doorbell rang and there was Cam's Uncle John jokingly telling his nephew he had just walked all the way from the airport.  It was the best evening for us all, laughing, sharing dinner and eating birthday cake.  We all went to bed a bit earlier that eve gearing up for the next three fun days ahead! 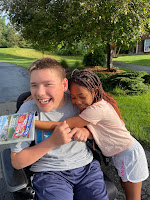 While we can't rename Camology Quotes to Layna's Laughs, we are dedicating this week to Jalayna.
There was a great deal of game-playing in the Weatherford household since July 5th.  Every single board game, card game and dice game was examined and reviewed.  Some especially fun moments were when the cousins would determine games to play that didn't require any props.  "School-time" was one such activity.  Layna was the teacher while Cam and his Grandma Sue were the students.  And Grandma Sue was pretending to be a troublesome student and kept asking the teacher "why?" with each instruction.  As Cam was cracking up and couldn't stop laughing at the entire scene, Layna had come to a conclusion and stated...

Users additionally appreciate the streamlined process for deposits and withdrawals, nicely as|in addition to} the dependable customer service group. Overall, Fire Vegas Casino provides a top-notch on-line playing experience for any user. All in all, Slots.LV Casino is a great choice for Canadian players on the 우리카지노 lookout for a top-quality on-line gaming experience. With a wide variety|all kinds} of video games select from|to select from}, ample bonus opportunities, and excellent buyer help, it is easy to see why this on line casino is so in style. If you are on the lookout for a new new} place to attempt your luck on-line, be sure to|make certain to|remember to} give Slots.LV Casino a shot. It doesn’t take a genius to figure out|to determine} that Slots.lv is all about — you know it — on-line slot machines.