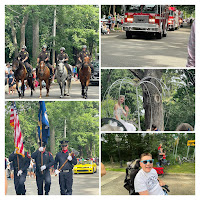 "I think Michigan keeps you sane and on an even keel through the ups and downs. In Michigan, I do fireworks, shovel snow and live life." ~Jeff Daniels
Many historians believe that fireworks originally were developed in the second century B.C. in ancient Liuyang, China. It is believed that the first natural "firecrackers" were bamboo stalks that when thrown in a fire, would explode with a bang because of the overheating of the hollow air pockets in the bamboo. Cam requested our very own Weatherford holiday tradition: breakfast at a local restaurant.  We arrived at Sundance for our morning meal right before 9am on Monday.  Knowing that our closest Cascade community would already be blocked off for the 4th of July parade, we opted to travel a few minutes further to Ada.  We found a spot close to the road and enjoyed the fifteen minute display of emergency vehicles, mounted police, the armed forces and a princess, among others. 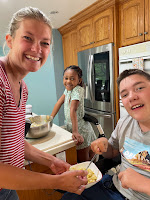 On Tuesday evening, we welcomed Grandma Sue and cousin Jalayna all the way from Arizona!  As they settled in on Wednesday, we dove right into activities.  Cam's cousin extracted nearly every game in the hall cupboard and Ms. Amanda made banana bread with the duo in the afternoon. 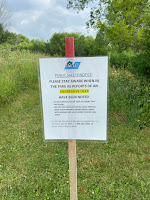 Thursday morning, we all had a good laugh when Cam and Amanda returned from their stroll through the park with one of the most interesting signs we had seen.  The notation of an aggressive deer took us all by surprise!

Cam insisted that his cousin, Layna, choose which wild animal park to visit on Friday.  After researching both of them online, the Deer Tracks Junction was the final decision.  We arrived after lunch and it wasn't as busy as we had expected.  Our adventure began by petting baby goats, one of which really wanted to eat all of the straps on Cam's chair.  From there, we found the baby pigs, bunnies, guinea pigs, camels and more.  Grandma Sue even wrangled a camel for a great photo opportunity. 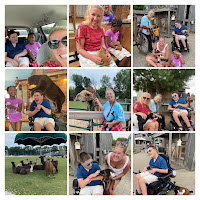 Two other areas awaited us at Deer Tracks.  The first was the "Plop Plop The Ice Cream Shop" located in the main area boasting homemade ice cream.  After enjoying the tasty treat, Cam and Jalayna thought it was hilarious that the stuffed bear appeared to be "after them." 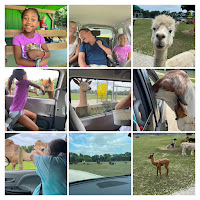 Back in the van, we were then headed to the Drive-Thru Safari, also a part of the Deer Tracks Experience.  Each carload is allowed to buy a bucket of feed for the animals, but only certain ones can have the food.  And the rules stipulate they are not responsible for any damage to vehicles caused by the animals.  We all noticed that the llamas, especially, are very greedy and very pushy.  Grandma Sue and Jalayna had a tough time holding onto the bucket.  As we made our way to the exit, the vehicle and everyone in it remained unscathed. 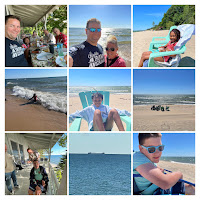 Saturday early afternoon, we pulled into the cottage parking lot ready for a beach day.  While Grandma Sue and Oma and Opa caught up chatting on the porch, the rest of us headed to Lake Michigan.  We had no idea how unbelievably windy it was.  The waves were a bit too big to maneuver the Cam-mobile so we stayed beach side as Layna jumped the water at the shoreline.  Cousin David arrived in time for dinner at the outdoor picnic table.  We dined on burgers, hot dogs, veggies, fruit, chips and homemade applesauce.  Oma made a special Oreo cheesecake in honor of Chris's birthday complete with delicious strawberry sauce and Country Dairy ice cream.  None of us left hungry that evening! 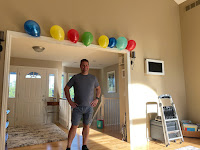 Sunday was Cam's dad's actual birthday.  Jalayna called a "family meeting" and asked that we host an official party for the bday guy. We all busied ourselves blowing up balloons and making certain that Chris had his favorites for all of our meals.  And typical of Cam's dad, as we were trying to be certain he was having a great day, he continued to make it memorable for each of us.

While eating breakfast on Thursday morning, we were talking about different things to have in the a.m.  Grandma Sue mentioned that she really enjoyed shredded wheat with coffee in it.  Jane requested she repeat what she had said to be certain she heard it correctly.  Cam's mom responded that it sound pretty gross. Meanwhile, her son had the perfect response for his own mother: