Mud hen: a marsh bird with short wings and long legs that inhabits swamps or marshes.

The Toledo Mud Hens officially came into existence in 1896.  The team adopted Mud Hens as its name in 1896, because the team played its games at Bay View Park. A nearby swamp was home to a large number of mud hens. Eventually, the Mud Hens joined the minor league International League, becoming a Triple-A ball club. Today, the Toledo Mud Hens are a farm team for the Detroit Tigers. The team's mascots are Muddy and Muddona, male and female mud hens. Fun fact: Actor Jamie Farr played a character on the sitcom M.A.S.H. Farr's character, Maxwell Klinger, from Toledo, Ohio, was a major fan of the Mud Hens. Klinger commonly wore Mud Hens gear, provided by Mud Hens General Manager Gene Cook, on the show. Because M.A.S.H. was one of the most popular television programs at this time, the demand for Toledo Mud Hens merchandise skyrocketed.

Saturday marked the first game of 2022 for the West Michigan Miracle League.  This season, Cam was assigned to the Mud Hens team with his best bud, Brody.  In the spring, the WMML chooses minor league team names to represent the players.

Oma and Opa arrived on Friday afternoon so they could ride with us for the early baseball event.
The chilly, windy morning had us all bundled up for the game.  Chris brought handmade quilts from Lori's Voice to hand out to the players and spectators.  Once again, the batting box pulley system that Cam uses to connect the bat to the ball was in full swing. 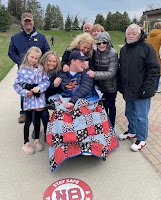 The volunteers were called in just the previous evening due to a group cancellation and we profusely thanked Hannah and Kristi for supporting the players.  In the stands, we welcomed Ms. Kathy (Cam's 3rd/4th grade teacher) and her husband, Kevin as well as Ms. Michelle (Cam's former nanny) and her granddaughter, Ada. 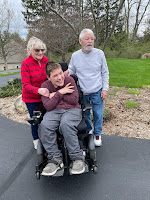 Cam was so excited to be back on the field and our Cam Fan contingency cheered as loudly as we could!
It seemed to take a few hours before we all felt warm again and the rest of the day was spent relaxing. 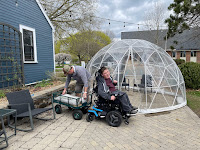 On Sunday, we all slept in and Oma and Opa left Grand Rapids after lunchtime.  Jane and her son seemed to have a role reversal moment when he asked to have a picture taken with just his grandparents.  We are so thankful Jane's parents are willing and able to travel to Grand Rapids to spend time with us. 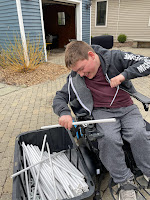 In the afternoon, Cam, Chris and Jane headed over to Brody's Be Café for operation igloo removal.  The weather had not been cooperating to allow for a larger group.  Cam insisted he be an active helper instead of a supervisor.  Chris loaded up the wagon with the heavy sandbags and Cam drove them into the garage.  As we took apart the poles and connectors, Cam placed them into the large bin. 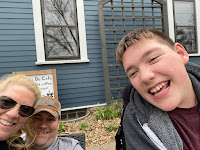 The three team members were able to complete the dismantle effort in just 90 minutes.  Projects always seem to go faster when there is laughter, music and joking thrown in.
We all felt a sense of accomplishment and that extra good feeling that can only come from helping others!
Camology Quotes:

Cam likes things the same way.  When something has changed, he notices right away.  He is also very truthful, sometimes maybe too truthful? 😉 One morning, Jane was running behind and hadn't "fixed" her hair yet.  Cam was looking at her rather oddly and said,

"Mom, you look pretty no matter what your hair looks like."