A Working Lunch - Week of May 16th 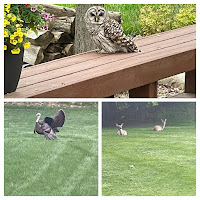 "It is more fun to talk with someone who doesn't use long, difficult words but rather short, easy words like 'what about lunch?' " ~A.A. Milne, Winnie the Pooh

It was a wild week, so sharing the wildlife from our own backyard seemed appropriate. Thursday was the Alternatives in Motion (AIM) fundraising luncheon.  This marked the first year it was held in person since 2019.  It was a mild, sunny day and attendees were personally and privately invited by the Board of Directors, of which Jane is a member.  The invitation was sent in email and featured the AIM Youth Ambassador, Cam! 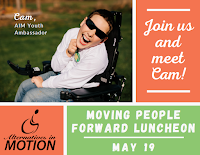 Our family was asked to speak about our history and interaction with Alternatives in Motion.

As a quick reminder, Cam used his very first powered wheelchair due to the non-profit AIM organization when he was only 5 years old.  As an organization, they strive to develop, sustain, and enhance independence for persons with disabilities, diversity, equity, and inclusion. 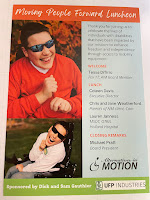 At the luncheon, we provided the analogy of when you repeatedly practiced before taking your driving test to obtain your official driver's license.  Can you imagine taking that test without ever having driven once?  Without AIM, that would have been Cam's conundrum.  Because of Alternatives in Motion, the "extra" powered chair he was given at age 5 is still used by our family for other locations we take him that don't provide maneuverability for a 450-pound chair like he uses now.  The equipment is provided at no charge and you retain it until it is no longer needed.  The only request is to return the equipment so it may be used by others. 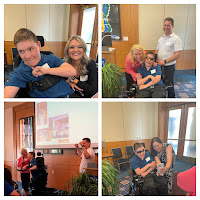 At our lunch tables, we had friends from the Mary Free Bed Guild, Brody's Be Café and Lori's Voice as well as the owner of Lakeshore Barrier Free, who has completed two remodels for our family.  A local news anchor, Tessa DiTirro, was the MC and Cam treats her like a celebrity, shyly looking away.  At the close of our brief presentation, Jane asked Cam if there was anything else he wanted to add.  He clearly spoke into the mic and said, "I want to thank everyone for coming and I want to thank all our sponsors."  We were pretty impressed with our son and informed the audience that he had not been "coached" to state that, it was all from his heart.  As an added bonus, our friend Ms. Molly gave Cam a cool new pair of shades and Dove chocolates as a reminder of his first professional speaking engagement! 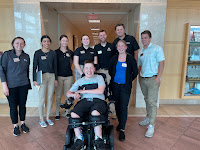 On Friday, Jane drove to Cam's school and picked him up at 2pm, right before the official end of the school day.  They traveled downtown to GVSU to work with the graduate PT students.  It was two separate sessions, which Cam is compensated for, as he "teaches" the students about his muscles and how to work with him as it relates to stretching, positioning and more.  Dr. Lisa, a professor at GVSU, who started the program always tells Cam to be tough on the students and make them brainstorm how to conduct the physical therapy session and how to help.  Cam gave all of the students an "A" for the day. 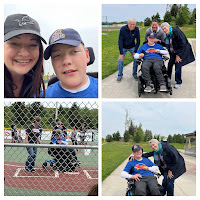 Saturday morning, the fourth WMML spring season baseball game was on the docket with Cam as a Mud Hen player and his dad, Chris, acting as substitute coach for his son's team.  The rain held off for the WMML teams games to play ball and our "Cam Fan" section included Coleen, the executive director of AIM, as well as Uncle Jon and Aunt Betsy.  It is awesome they all came to cheer on Cam.  Coleen mentioned that next season we may need to "step up" our Cam Fan section with pom poms or some other fanfare.📣 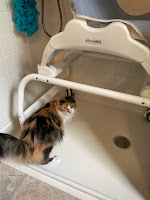 Our cat, Stella, is slightly obsessed with water.  At the mature age of 16, she meows to be placed on Cam's bathroom countertop to drink water out of his sink.  Just recently, she has taken the bold move of walking in and out of his shower when it's on!  The first time she did it this week, Jane gasped and Cam asked her what was wrong.  When his mom explained what she had just seen Stella do, Cam commented:

"Since Stella is older, she is getting outside her comfort zone, Mom."