"Cam Effect" - noun. Representative of something that denotes different abilities or accepting challenges. Something that reminds the person of Cam W.

It happens more often than not...a family member, friend, or even acquaintance will tell us about a story they heard or experienced, or something that occurred in the past or present that made them think of Cam. 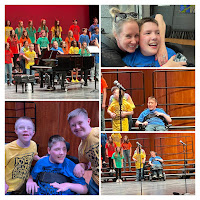 Recently, cousin Liz sent us an article she read about the organization Wheel the World.  It was launched in South America to provide accessible vacations and destination information.  And while at a physical therapy appointment, Aunt Betsy's PT was talking about a pediatric PT graduate class he had at Grand Valley.  Aunt Betsy mentioned her nephew Cam working with that program over the years.  Her physical therapist told her Cam was a celebrity there!

Cam's last choir concert of the year was scheduled for Thursday. Unbelievably, the western Michigan temps were in the high 80's most of the week.  The eighth graders all wore their Joseph and the Amazing Technicolor Dreamcoat shirts, which made for a very colorful stage. For the last song of the evening, Cam activated the standing mode on his chair.  Brody's mom, Jenn, gave him a big hug after the concert. 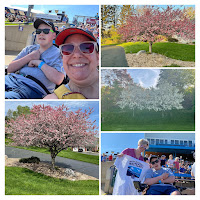 Friday's school day was spent at the local minor league baseball team's field to watch a game played by the West Michigan Whitecaps. The temp was unseasonably warm, but the kids were there in the morning and stayed just past lunchtime.  By the end of the day, Cam's seasonal allergies had really kicked in due to a combination of the blooming landscape and high pollen.  He arrived home with watery eyes and running nose.  After a dose of Benadryl and a good rest, he declared he felt "150% better" in the morning. 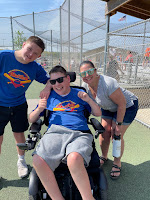 That was a big relief since Saturday was another WMML game.  Cam's best bud, Brody, was dropped off at our house prior to the game and we all rode together to the Rockford field.  Not only did Ms. Stephanie, fabulous aide, hang out with the boys on Friday at the baseball game, she also made it to the West Michigan Miracle League for Saturday's Mud Hens game.  It was a beautiful morning for our 10am start time.  Afterwards, we met up with Brody's dad and then made our way northward towards the cottage. 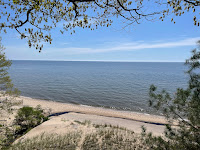 We arrived at Lake Michigan a little after 1pm and commenced grilling our lunch.  Oma and Opa, Max, Coco, Calla and Max's brother, Eric and our family shared a delicious meal and dessert.  The lake looked inviting but it's still much too cold to swim (~50 degrees F). 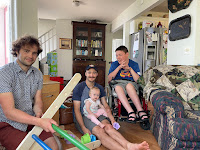 The afternoon was spent watching Max and Eric assemble a climbing apparatus for Calla.  Luckily, Cam was providing supervision and assisted the guys along the way.

The power wheelchair Cam uses inside the cottage is definitely too small for him.  The adult chair was provided by Alternatives in Motion when Cam was just 6 years old.  Stay tuned for an Alternatives in Motion event next week where Cam will be featured as one of the "highlights."  We just have to be certain this local "celebrity status" doesn't go to his head 😉

Once again, we realized the importance of listening to our son's wise advice.  After our first week with the new ceiling track/lift, the remote suddenly stopped working Wednesday night.  After some collective frustration, Chris was able to use the buttons on the motor to maneuver but wasn't able to fully guide it where it needed to go.  Cam remained calm and after troubleshooting with the installer, a new remote was on order.  In the meantime, Cam had a suggestion:

"Dad, pull the emergency power cord and leave it off all night, please."

The next morning, not expecting any change, Chris grabbed the remote and... it worked!