"I think I have the coolest room in the house now." ~Cameron J. Weatherford
When a project is ongoing, it's gratifying to see stages completed.  We always say Cam is a trooper and he's proven that once again while living in a semi-construction zone.  He doesn't complain and continues to be appreciative of the efforts. Little things can make all the difference...Cam's dad arriving home with a beautiful bouquet and outfitting his son's chair for "Neon Day" at school. 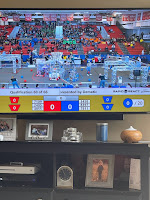 With only three days at the middle school this week prior to break, each day was designated for school camaraderie. Monday- Pajama Day, Tuesday- Neon Day and Wednesday- Beach Day.  Cam doesn't really have any super bright clothing so Chris ordered battery-operated lights for his power chair.  Tuesday morning, his bus driver Ms. Christy told him he "looked like a spaceship or a hovercraft as you were driving down your driveway!"
On Friday, Cam had his booster shot and Saturday was spent indoors on the couch since he didn't quite feel like himself.  Previously, we had planned to attend a Robotics competition at Kentwood high school.  We were relieved the event could be seen online so we could still catch the action. 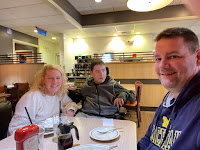 Sunday morning, Cam declared he felt just fine again and asked if we could go out for a family breakfast.  His parents let him choose the location and he picked IHop.  We couldn't remember the last time we had been there.  It was a delicious breakfast and we decided we would try to go out for a morning meal at least one time every month.
With our Phase 1 of construction completed thanks to Mr. Brandon at Lakeshore Barrier Free, we were able to put Cam's room back together with pictures up on the walls and his WMML medals displayed.  Now, we wait until the ceiling track arrives and that installation will take place next. 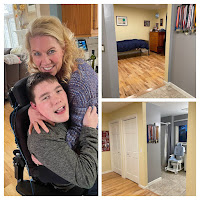 In the meantime, Cam has been enjoying his new expansive space and Jane, who works from home, is most thankful that this first round of construction came to an end. 😉

Chris and his son love to play pranks.  On April 1st, we said Good Morning to the Amazon Alexa as per the normal routine.  After providing the weather forecast and daily information, Alexa indicated that a new feature had been added called "what's that smell?" using new smell technology.  Alexa asked us to imagine bacon cooking and then did a countdown 3..2..1 and we heard a whoosh sound.  Alexa said "did you smell it?" We all said "No!" Alexa continued with 2 more smell technologies, both of which we indicated we did not smell.  After a short pause, we then heard Alexa say...