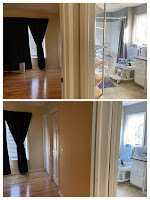 "The road to success is always under construction." ~Arnold Palmer

"The shortest distance between two points is under construction." ~Leo Aikman

The week arrived to begin construction in Cam's room and bathroom.  This first step of preparation is in anticipation of the ceiling track to be installed next month.  The track will transport Cameron from his bedroom to bathroom and back via a ceiling-attached apparatus and a remote control.  The goal this week was to remove the bathroom cabinets and then "break through" the wall separating the two areas.  After clearing out the cabinets that would be removed and protecting the areas that needed to remain in place, the work commenced.  Jane was the only one at home for all of the increased activity, but it wasn't nearly as noisy as she thought it would be. 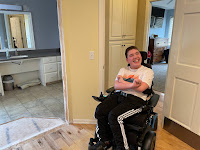 At the end of Day 1, the open space was revealed!  Seeing the cabinets and wall completely removed made the space look so much bigger.  Being able to easily traverse from one place to the other without going around the corner was a brand-new experience for us all. 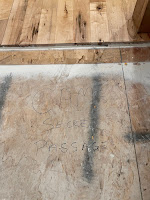 Chris declared the new entry "Cam's Secret Passage" and wrote that on the floor, which would eventually be covered by new flooring. Friday evening, father and son took a road trip to Allendale to deliver their 3D printed tourniquets to help with the effort overseas.  They found the drop box and deposited their 4 sets that would be sent internationally to Denmark and then subsequently to Ukraine.  It was a contribution, no matter how small, to help others.

When Cam rides in our van, he is in "the middle" of the back seats thereby giving him an eagle eye view of the dashboard.  He was rightfully a bit nervous when he noticed the low gas gauge warning. His dad assured him they would make it to the Costco gas station.  Sure enough, they did, much to Cam's relief. 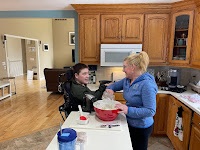 The weekend was a bit chilly and dreary, so inside work dominated our time.  As a family, we watched King Richard and we all thought it was a good movie.

Cam and Jane decided it was a perfect day to make their homemade banana bread with mini chocolate chips.  Chris perfected the recipe long ago and it makes 4 mini loaves plus a large loaf.  There was just enough for one rounded muffin top for Cam to test out for his snack. He highly recommends spreading creamy peanut butter on top of a warmed piece. 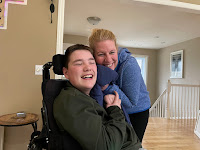 Laundry is not Jane's favorite activity but since two guys are always willing to help, it isn't as awful as it could be.

As an extra added bonus, Cam still loves the warmth of clean sheets when they exit the dryer! Stella was a bit off kilter this week with the construction.  Chris was attending an evening meeting and Jane and Cam were eating dinner at the dining room table.  Jane was looking at the staircase and noticed Stella sniffing everywhere by the door and on the rug. Cam wasn't looking at Stella since he was concentrating on his meal.  Jane realized that their cat was trying to determine who the individuals were that had created all of the new scents in her home.  Cam's mom then announced,

"You know cats are really curious."

"That is a really random thing to say, Mom."

It’s anything but know how this medication helps individuals to lose weight. It might work by reducing your craving, expanding the measure of energy used by your body, or by changing certain pieces of the brain.