Joseph and the Amazing Technicolor Dreamcoat is a musical with lyrics by Tim Rice and music by Andrew Lloyd Webber. The story is based on the "coat of many colors" story of Joseph from the Bible's Book of Genesis. It was the first Lloyd Webber and Rice musical to be performed publicly. The show has only a few lines of spoken dialogue; it is almost entirely sung-through. Its family-friendly story, familiar themes and catchy music have resulted in numerous stagings.  Forest Hills Northern High School added to that list of performances.

Cam, along with the 7th/8th grade choir had been practicing the music for months.  The high school theatrical group endured their own lengthy practices involving singing, choreography and set design. This was the week of final rehearsals and the actual live performances.  Rehearsals were 3 hours long and the choir kids had to sign up for 1 evening.  They were to be dropped off at 5:30p and picked up at 8:30p.  That is a long evening on a school night especially when you're typically in bed by about 8p.  Cam persevered and even woke up for school in a great mood on Wednesday morning after missing out on more than an hour of sleep. 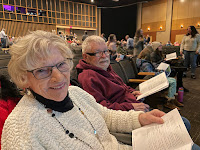 Oma and Opa arrived on Thursday afternoon, anticipating their grandson's weekend performance.  We were relieved Cam's grandparents were able to drive in Thursday because much to our surprise, some snowflakes accompanied by frigid temperatures filled the day on Friday. Jane was able to secure front row seats, directly within eyeshot of where Cam would be.  The middle school choir was split into two sections- far stage right and far stage left.
At the Friday evening event, we saw Cam's teacher and classmates, Cam's favorite aide, Brody's family and others.  We were impressed by the high school talent comprised of singing and dancing along with the middle school melodic choir.  Cam's choir teacher is pictured with him and made certain he had the full experience of the performance. 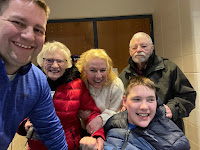 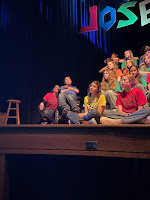 As we were leaving, a fourth grade teacher approached Jane and told her that Cam had grown so much and it was great to see him in the show.  She also said that our son made such an impression on her when he was in elementary school and she will never forget him.
After a successful evening, we spent Saturday cooking meals, playing games and enjoying time with Oma and Opa.  That night we all watched the new Disney movie, "Turning Red" and gave it a thumbs up. 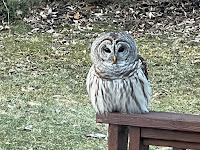 Oma and Opa were headed back home late Sunday afternoon.  In the early eve, Jane and Cam were watching a show together when Chris quietly called to them from the sunroom.  He almost tiptoed into the living room to show them a picture of a visitor on their back deck.  Cam and his mom were so shocked to see the majestic-looking owl looking right at Chris! 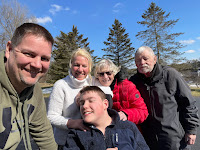 Jane's mom was telling Cam about her own experience with Joseph & the Amazing Technicolor Dreamcoat.  She told him that her hometown (Indianapolis, IN) youth choir had such great feedback that they took the show "on the road" and their first performance was in Grand Haven, MI!  Cam looked a bit perplexed and asked:

"What road did they shut down in Grand Haven?"

Jane chuckled and chimed in: "Cam, when Oma said they took the show on the road, it's an expression meaning that the show will be performed in another location.  They didn't actually shut down a road to perform it on an actual road." 😁