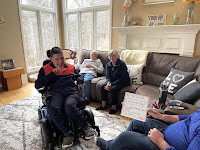 "April hath put a spirit of youth in everything." ~William Shakespeare

Cam settled into his spring break week but the weather wasn't exactly "spring-like."  That didn't deter any fun planned for the time off, though. 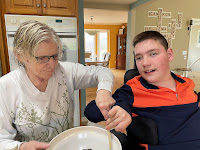 Ms. Ann continued tutoring Cam, working on spelling, reading and math.  Oma and Opa arrived on Tuesday to spend 4 nights with us.  Cam made up daily stories with Ms. Ann that he then read to his family each evening. 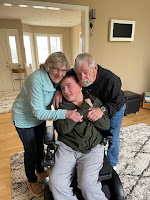 Oma and her grandson love baking and they completed a delicious batch of homemade applesauce as well as Energy Bites.  The Bites are made with just 5 ingredients: oats, honey, peanut butter, mini chocolate chips and vanilla extract.  On Friday evening, we secured take out from JT's partaking in scrumptious fish and chips, one of Cam's newer favorites.  After an early dinner, we all gathered in the living room to watch the West Side Story movie.  Even though it was a long movie, we all gave it a thumbs up! 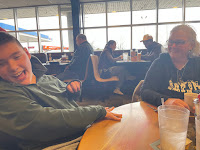 Saturday morning, we said goodbye to Cam's grandparents and thanked them for all of their time and help.  Right after they left, Chris & Jane and son made their way to a place they'd never been to. With an appointment to have the van's windshield replaced, we came upon the fact that a restaurant was located right next to the windshield replacement place. 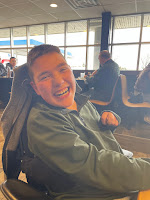 Sine Ms. Ann had been aware of our plans, she told us that this restaurant actually had the highest online ratings for Byron Center. And much to our collective surprise, it was the 76th Street Truck Stop Diner.  It is open 24 hours a day, 7 days a week.  Due to its popularity, the diner was quite crowded when we arrived and met Ms. Ann.  We were seated quickly and given lots of attention.  Even though it was almost lunchtime, we all ordered breakfast and no one was disappointed!  Cam had two blueberry pancakes the size of his plate and declared them the best ever.  We all agreed it would be a good idea to return next month and try out the lunch menu. 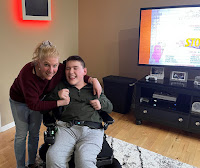 Saturday evening, we found a family movie to watch, quite by accident.  Jane was reading an article about top movies to see as a fam and The Mitchells vs. the Machines was one of them listed.  The movie was released in 2021, is an animated film and filled with humor for all ages.

Each of us laughed out loud and we were happy we took a chance and watched something none of us had even heard of.

Chris loves to joke around with his son and his son believes he is the funniest human on earth.  The best part is- they truly never tire of the puns and pranks. Almost daily, Cam's dad (as he was leaving for work) would tell Cam to have fun at school at which point, Cam would remind Chris he was on spring break.  One evening upon arriving home, Chris asked Cam how his day at school was and without missing a beat, Cam replied: