Waiting for the Negative - Week of Sept. 27 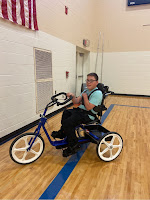 "Patience is not passive, on the contrary, it is concentrated strength." ~Bruce Lee 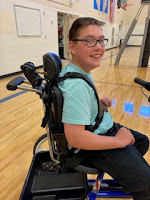 When a fierce cough seemed to arrive out of nowhere for Cam on Sunday, we all took a deep breath.  Ever since the pandemic took hold, each and every 'symptom' carries more weight than ever before.  Cam stayed home from school on Monday.  With restless sleep and multiple coughing fits, we erred on the side on caution.  Tuesday morning, we called the pediatrician and they asked if we could bring him in.  Upon checking Cam over, they deemed it advisable for him to be tested for Covid.  And then the arduous wait began.  Ever the optimist, Cam continued fulfilling homework duties and was able to video in with his class.  On Wednesday, we still didn't have test results and even though he was feeling much better, the rules indicated he was to remain at home.  Thursday a.m. at 7:05, we received the negative results!  He was not able to ride the bus, but Jane rushed him over in the van and he arrived before first hour.  Cam enjoyed an indoor bike ride trying out some new wheels at school.

That evening, Chris and Jane decided the good news called for celebration.  They covertly planned an Olive Garden dinner pickup.  While Jane was finishing work in her home office, Chris was headed to grab our Italian feast.  However, his son called him via FaceTime video and correctly guessed where he was!
On Friday, we realized our time was running out to partake in a unique offering in our own city.  ArtPrize® is an open, independently organized international art competition which takes place in Grand Rapids, Michigan. It celebrates artists working in all mediums from anywhere in the world, and is open to any creative with an artwork to enter and a venue willing to host it. For 18 days, art is exhibited throughout the city in public parks and museums, in galleries and vacant storefronts, in bars and on bridges. ArtPrize awards $450,000 directly to artists, through grants to support their ambitious work and through prizes which the public decides through the ArtPrize website. Since its inception in 2009, millions have participated in ArtPrize, displaying their work, opening their spaces to artists and visitors from around the world, and sparking countless conversations about what art is and why it matters. 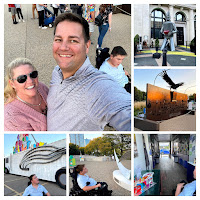 Since ArtPrize was ending on Sunday, we quickly drove downtown after an early dinner on Friday eve.  The oversize replication of the Tin Man kneeling on the corner looked larger than life.  At the Gerald R. Ford Museum, we strolled around and checked out multiple installations including one Cam even drove through.  Although we only saw a small snippet of the many entries, it was impressive and good to be out in our community. 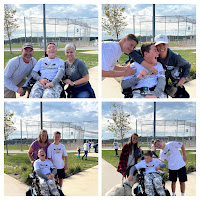 Saturday morning we were back at the WMML ballpark for a 10am game.  We typically don't always know which Cam Fans will show up.  We were excited to see Ms. Barbara (Cam & Brody's K-2 grade school teacher!), Steve and Patti (longtime friends and neighbors) and a new friend we met while camping, Ms. Lauren and her dog, Bailey.  Dick's Sporting Goods sponsored the day with gift bags for every player and a hot dog lunch. 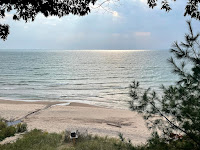 Besides watching the game and seeing all of the kids up to bat, there was another incredible feel-good moment.  Following Cam's 10am game, there was an announcement on the microphone to turn your attention to the field.  The Dick's Sporting Goods Foundation presented Tony Comden, president of the West Michigan Miracle League with a check for $10,000!  Everyone was cheering so loudly!  One of the needs in the near-term will be to replace the special turf on the WMML field that accommodates wheelchairs, prosthetics, walkers and any other device needed for kids with different abilities. 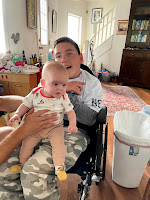 After our hot dog lunch, we ventured northward to see Oma and Opa.  It was a cloudy day which happened to be the perfect compliment to our indoor project list.  After completing some computer duties, Cam and his grandma were deciding the next thing to tackle.  Oma asked Cam if he would rather organize a closet or bake cookies... and the winner was... closet organization.  The pair worked well together as they filled an entire box for donations.  And of course, following that task, grandson and grandma did in fact, bake cookies. 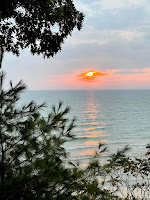 We ate an early dinner with our families and cousins Coco, Max and Calla.  Cam's youngest cousin is growing much too fast!  Following a delicious meal of grilled chicken, pesto pasta, fresh fruit and garlic bread, those cookies tasted yummy😋  With the earlier sunset, we were lucky enough to see the sun seemingly slip into Lake Michigan.
Our new friend, Lauren, summed up her first WMML baseball game in the best way possible saying "if someone is in a bad mood or having a bad day, they just need to come here and watch this.  It is so awesome!"
Equally awesome is hearing Mr. Tony in the video announce our son's entrance onto the baseball field!

On Sunday, after attempting to fix the 'home assistant' (which was quickly becoming the 'home adversary') the boys were 'all in' addressing the anomalies.

"You're one tough cookie, Dad- you never give up!"