"Deep human connection is ... the purpose and the result of a meaningful life - and it will inspire the most amazing acts of love, generosity, and humanity." ~Melinda Gates

We often think about the people we wouldn't be connected to if it wasn't for Cam.  One of those individuals is his afterschool tutor, Ms. Ann.  Katherine is Ann's daughter and was Cam's nanny for 3 years when he was younger.  We became linked with their entire family and we now think of them as lifelong friends.  The pandemic made tutoring difficult but virtual sessions were still successful.  Ann keeps Chris and Jane appraised of any extra work needed.  This week was an important social studies test and we were alerted to some extra studying tips by Ms. Ann.  Cam's hard work paid off!
He also participated in stretching and reaching exercises at school. 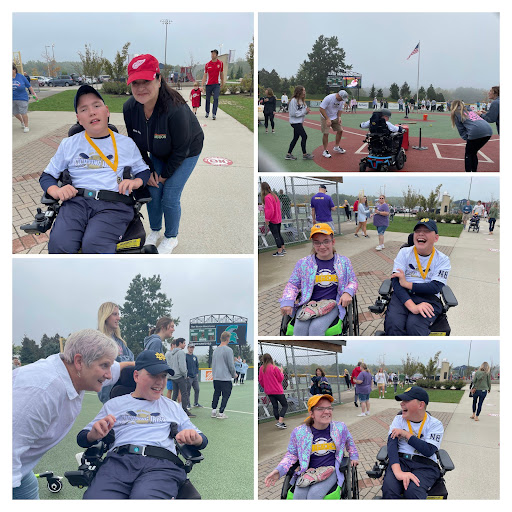 As is the case with most of our activities, the weekend becomes the time to participate in different events.  Saturday morning marked the final WMML baseball game of the fall season.  Cam was ready to go for the 10am game.  Once again, our Cam Fans did not disappoint!  Coleen, the AIM executive director is a big sports fan and she has become a regular attendee.  Ms. Kathy and her husband, Kevin, haven't missed a season yet and Ms. Kathy has other former students that she also sees at the West Michigan League field.  Following the game, as is the WMML tradition, each player was presented with a medal that was placed around their neck.
Just as we were heading out, Cam spotted his good friend, April.  We have known April since the beginning of our wheelchair costume adventure with Mary Free Bed Rehabilitation Hospital in 2016.  April was wearing a sparkling jacket in preparation for her first homecoming dance that she planned to attend that evening.  She and Cam had a nice chat before we headed home. 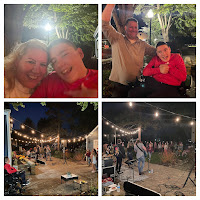 Brody Be's Café was on the Saturday evening agenda since our entire family was signed up to volunteer for a fundraiser.  When we arrived, the set up team was in full force with decorating and the live band "Prior Noon" was involved in sound checks.  A popcorn machine was at the ready and Jet's pizza was due to arrive to sell to spectators.
Cam and his mom were stationed on one side of the café ready to welcome folks.  Jane and her son let people know they could order smoothies and coffee drinks inside and purchase pizza.  Outdoors, mini popcorn buckets were for sale. 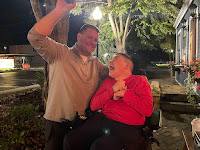 Chris was a floater, helping with whatever was needed.  At one point in the evening, he drove over to the pizza place picking up 5 more pizzas to sell.
Cam is sensitive to loud sounds, so his parents were pleasantly surprised by his laughter and smiles while dancing in his powerchair to the music.
The biggest shock of all, though, was his insistence to stay up late.  Even on the weekends, his bedtime routine begins shortly after 8p.  In full support of the event and fulfilling his volunteer duties, he rallied and we were all at the café until 9:30pm before heading home.
Cam's parents were super proud and told their son how much it meant to them both.  During the short trip homeward, Chris asked his son if he knew that trooper was spelled C-A-M! 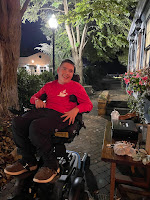 Cam is keenly aware of his school schedule, all appointments and upcoming events.  His teachers have always told us that Cam knows the daily routine and timing better than they do.  On Thursday he asked Jane if she had canceled his next PT session since it was on the same night as his upcoming choir concert.  Cam's mom assured him that she had already, in fact, sent an email to his physical therapist to alert him of the schedule change.