Patience is a Virtue - Week of Oct. 11th 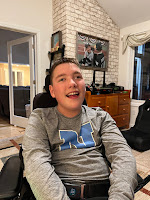 It's most commonly believed that the line 'Patience is a Virtue' originated from the poem, 'Piers Plowman'. It is said to have been written around 1360 by English poet William Langland, about a man in search of faith. One line in the poem states that “patience is a fair virtue.”

Patience may have been a virtue back in the 14th century, when there was no smartphones, internet, planes, email and so on. But not so much today. 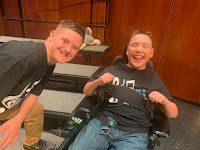 One person we know who, at times, seems to have infinite patience, is Cameron.  Like every other individual, his tolerance is greater for some things than others. 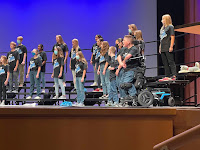 Monday evening, we ate an early dinner and made our way to the Fine Arts Center for the first choir concert in almost two years.  To say Cam was excited is a bit of an understatement.  The entire event was available to watch online via livestream and Cam texted the information to no less than 10 people.  On his own, our son requested his knee blocks so he could be in standing mode while singing.  This was the first time he had wanted to stand for a public event.  As an added bonus, Cam's best buddy Brody also attends choir so they were on the stage together along with the other eighth graders. 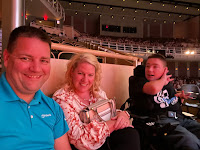 The concert began at 7p with the 7th/8th graders singing a few songs.  Following their performance, the high school kids took the stage.  They sang a medley of older tv theme songs and commercials.  Cam's parents knew all of the melodies but the school-age kids were somewhat unfamiliar.  Back at home, a request to hear the "Happy Days" theme song via Alexa became a common ask. 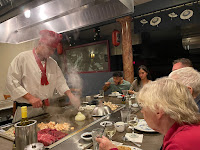 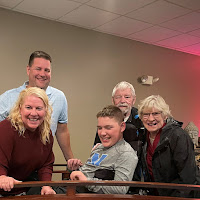 On Friday, Cam was scheduled for a half-day of school and we had a very busy afternoon planned.  Oma and Opa were traveling to Grand Rapids to stay the night.  First up on our agenda was upgrading the older flip phone Jane's mom had been using to an iPhone.  It was difficult to determine who was anticipating this appointment more- Cam or his grandma.  To Jane's surprise, the entire experience was painless and lasted less than an hour.  Once they arrived home, Cam got straight to work explaining the setup to Oma and helping her practice. To celebrate the week's goodness, our family wanted to treat Cam's grandparents to a hibachi dinner.  We had made reservations at Ichiban, a local Japanese steakhouse.  Our chef, Mr. Ray, was such a pro!  He effortlessly sliced and diced, tossed shrimp with his spatula, made an onion volcano and kept us all engaged.  As we continued chatting, he shared with us that he had a special needs son who worked at Maggie's Be Café (the sister store to Brody's Be Café) and we all remarked about what a small world it is.
We said goodbye to Oma and Opa on Saturday afternoon, still marveling about everything we had accomplished and the wonderful dinner out the night before. 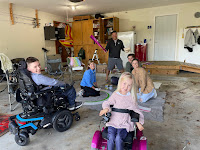 Sunday afternoon brought many more smiles as we welcomed a mini wheelchair costume building crew into our garage.  Since our Halloween Heroes parade had to be canceled again this year to protect all of our kiddos, we volunteered to create a costume for one of our 'veterans' Miss Lylah who was a member of all four parades.
It was an afternoon filled with laughter and energetic activity as we began creating a rainbow unicorn for Lylah.  Her mom was in disbelief that our small taskforce was so ready and willing.  As I shared with her, it was truly a gift for all of us to be involved in something that brought Lylah so much joy.  Next week, the final costume will be revealed.
As they used to say at the end of Happy Days...stay tuned...
Camology Quotes: 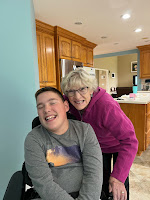 Cam is not only a patient person, he is also a patient teacher.  All week he was looking forward to helping his grandma with her new iPhone and he did not disappoint.  While Jane was attending to work late Friday afternoon in her downstairs home office, her son was providing iOS training in the sunroom by sending multiple text messages for practice and answering questions.  At one point, Cam called Jane on FaceTime and proudly reported on their progress...

"Oma is really getting the hang of it, Mom!"