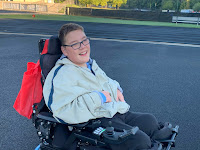 "It's not a faith in technology.  It is a faith in people." ~Steve Jobs

"The advance of technology is based on making it fit in so that you don't even really notice it, so it's a part of everyday life." ~Bill Gates

Both of Cam's parents have careers that deal with technology.  It is fitting that Cameron seems to gravitate toward it as well.  He is always asking poignant questions relating to how things work or why something was designed a certain way.  This week, the latest iOS (Apple) software upgrade became available for Cam's iPad and his parents' smartphones.   And of course, Cam was first to update his device.  He then proceeded to fearlessly test out all of the new features.  Beginning the very next day, Cam made it his mission to remind his parents (every 5 minutes or less) that they needed to complete their updates immediately.  Suffice it to say, Chris and Jane successfully upgraded their devices and learned about the 'latest and greatest' from their son. 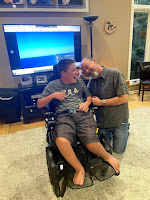 We had a surprise visit from cousin David who flew in from Texas on Thursday.  He landed in Grand Rapids close to dinnertime and we invited him to a home-cooked meal at our place, just ten minutes from the airport.  Cam proceeded to request a play-by-play of David's entire trip and peppered him with questions throughout.  Our cousin loved seeing all of the drone videos and pictures Chris had taken of the Lake Michigan shoreline.  We sent David on his way north to his cottage with some scrumptious homemade strawberry jam. 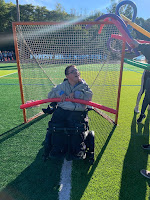 Friday was an outdoor morning at school for Cam.  It was a half day so the kids enjoyed activities on the soccer field and track.  It turns out that the picture of Cam as the "goalie" made it to the Forest Hills Northern Middle School Instagram page.  He was pretty thrilled by the whole thing and couldn't wait to tell Oma and Opa, who just happened to be at his home on Friday afternoon.  They drove into GR to spend time with our family and to attend Cam's awesome baseball game on Saturday morning. 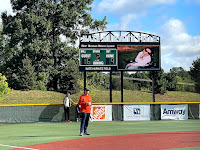 We have been so fortunate with our fall weather this year and Saturday was no exception!  The morning was cooler but filled with bright sunshine as we made our way to Rockford for the 10:00 am game time.  The Hope College Women's Basketball Team was on board as volunteers for the three-game event.  The Fifth Third Bank videoboard is an awesome addition to the West Michigan Miracle League field.  As parents, we were asked to send in a picture that could be displayed.  Cam chose the pic of him in the shades and the crowd seemed to approve of it as well.  Each picture is shown as the player arrives at the batter position. 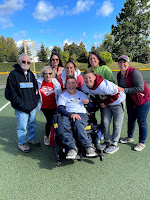 It was a big 'Cam Fan' day at the ballfield- Mary Jo (one of Cam's sitters) and her mom, Ms. Cris (Cam's former parapro), Oma & Opa, Coleen (A.I.M. Exec Director), Mrs. Festian (Cam's current parapro) and of course, best buddy Brody who plays on the same team as Cam.

We are reminded, constantly, of the people who remain a part of Cam's life even though they don't see him on a daily or even a monthly basis. It is a testament to the mark he leaves on others and the ability he has to draw people in over and over again, no matter how long it has been since they have actually seen each other.

At bedtime, Cam is quite insistent on experiencing darkness in his bedroom.  It seems at times he may even be a bit dramatic with his need for the room to be dark.  As noted by a recent comment at his early time to bed in relation to his curtain and setting sun.

"The light from the curtain is boring into my eyes!"