Back to the Ballpark - Week of Sept. 6th 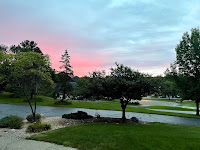 In each person's lifetime, there are certain events that take place when everyone remembers exactly what they were doing on that day.  For Cam, it will most likely be the Covid-19 virus and the schools abruptly closing on March 13, 2020 for the remainder of the year.  For Cam's parents, it is September 11, 2001. 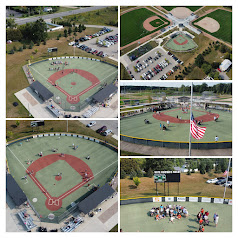 At school this week, our eighth grader discussed Patriot Day with his class.  They talked about how President George W. Bush proclaimed Patriot Day to be held each year on September 11 as a day to remember the people lost during the tragedy and the patriots who fought to rescue and defend our freedom.  The class discussed the 9/11 memorial that was constructed by Michael Arad.  It includes three symbols: a waterfall representing tears while it masks the noise of a busy city, a void which represents the enormous loss and the reflective pool symbolizing remembrance.  All 2,977 names of those deceased are etched around the waterfall.

Saturday, September 11 marked the opening day for the fall season of the West Michigan Miracle League.  Cam has played for WMML for more than 7 years.  This season is a double bonus since our son knows his Coach, Mr. Mark.  Mark's son, Carson, is a longtime Miracle League player and he and Cam have known each other since preschool.  The assistant coach is Zach, Carson's younger brother.  As always, our request to have Brody and Cam as teammates was honored!  The buddies are the Notre Dame Fighting Irish and this weekend marked the first of five games. 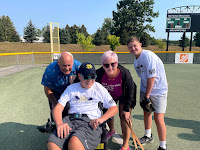 For the September 11 game, the flags flew at half staff and a moment of silence was recognized for the 9/11 tragedy.  Chris brought the drone and captured some great shots on a calm day with very little breeze. 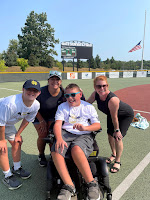 In the "Cam Fan" section was Cameron's 3rd and 4th grade teacher, Ms Kathy and her husband Kevin.  Kathy hasn't missed seeing at least one game every season since she taught Cam.

Also present was Cam's current teacher, Mrs. Wells, along with his current para-pro Mrs. Festian.  Jane has known Mrs. Festian since Cam was in grade school and it's such fun to have people cheering him on. When our ball player hears the cheers, his smile grows even bigger. 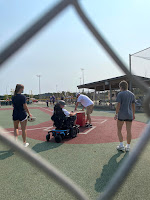 The president, Tony Comden announces every game and introduces each player via microphone.  Each player bats twice and is in the outfield two times.  Tony has bestowed our son with the nickname "Cam the Man!" and intros him with that phrase each and every time.  The batter box is an apparatus Cam has used for a few years now and it allows him to independently swing the bat with the assistance of the homemade box donated to the WMML.

The volunteers were back again this season for the first time since the pandemic began.  The women's Hope College softball team were in full force assisting the players at the 3 separate games that day. 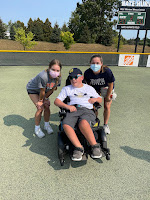 Perhaps the best bonus of Saturday was having Cam's best buddy, Brody, with us for the entire day.  The boys watched a movie together ("Ratatouille"), played games and requested lunch from their favorite eatery, Culver's!  These two are always looking out for each other.  Having been friends since kindergarten, they are definitely aware of one another's habits, likes and dislikes.  In the movie they saw, this is a favorite quote, "If you are what you eat, then I only want to eat the good stuff!" 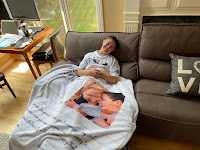 Cam is a rule-follower through and through.  When Brody wanted to play music on our Amazon Alexa, Cam made certain it was the "clean" version.  Before lunchtime, Brody said he would like "2 cheeseburgers please" and his buddy Cam knew he was only supposed to have 1.  After Brody's announcement and out of care and concern, he said to his best friend: "Um, Brody, we are going to have to text your parents about that request!"

1xbet Review and Overview - Are They Worth Playing? - RideVegas
OneXBet 구리 출장샵 is one of 구미 출장샵 the most reliable casino software solutions 목포 출장마사지 that offers the 성남 출장샵 best free casino games to customers, and they have 1xbet 먹튀 plenty of casino