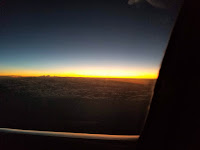 “The gladdest moment in human life, me thinks, is a departure into unknown lands.” ~ Sir Richard Burton
“Travel makes one modest. You see what a tiny place you occupy in the world.” ~Gustav Flaubert 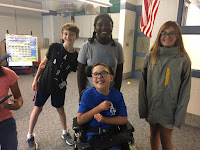 The school week was a short one for Cam.  Due to unexpected illness, he was home for a portion of the first three days.  He was able to hang out with his "Husky Helpers" in the classroom and that made up for some of the absence. 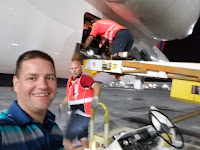 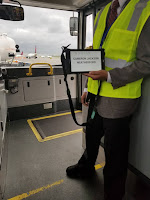 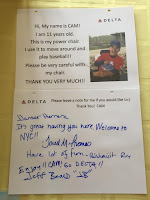 Thursday evening, we finished our packing and readied the family: Cam, his parents, and grandparents for the first morning flight to New York.  It's not often one wakes up (on purpose) at 3:30am, but since we needed to depart for the airport by 4:30, this was our scheduled alarm.  Cam was truly the most chipper in our group and by far the most awake. 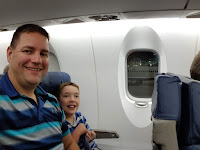 While we were settling in on the plane, the powerchair must be taken by airline personnel to the cargo area underneath.  As we awaited takeoff, a gate agent appeared asking for assistance with the chair.  Chris jumped into action and even snapped a pic while on the tarmac.  We watched the sun rise as we continued on our route. 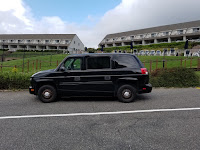 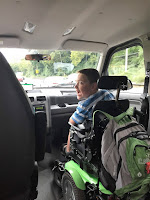 Upon landing, the pilot announced that we would need to take a bus to the terminal since the gates were all tied up.  Cam thought it was hilarious that we flew in a plane, only to take a bus to get the rest of the way to the airport.  The Delta team was very impressive.  A man with a tablet showing Cam's name met us when we were off the plane, waiting for our son's ride.  The Delta folks took such care in removing Cam's powerchair from cargo and even autographed his sign attached.  Next up was finding our rental, which much to our surprise looked like a foreign vehicle.  It was actually an MV-1, a van manufactured in Indiana as a wheelchair accessible taxicab.  For the first time ever, Cam's spot was next to the driver!  He was an excellent co-navigator for both of his parents as Chris and Jane shared the 3-hour drive to Montauk, NY. 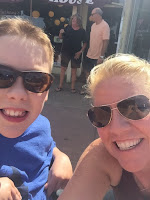 Located at the tip of the South Fork peninsula of Long Island, 118 miles east of Midtown Manhattan, Montauk has been used as an Army, Navy, Coast Guard and Air Force base.
Montauk is a major tourist destination and has six state parks. It is particularly famous for its fishing, claiming to have more world saltwater fishing records than any other port in the world. Located 20 miles off the Connecticut coast, it is home to the largest commercial and recreational fishing fleet in New York state. Montauk derives its name from the Montaukett tribe, an Algonquian-speaking tribe who lived in the area. In 1614, Dutch explorer Adriaen Block encountered the tribe at Montauk Point, which he named Hoeck van de Visschers, or "Point of the Fishers."
In 1995, Montauk became the birthplace of the Extreme Surfcasting technique known as Skishing. The sport involves donning a wetsuit and flippers and swimming into the ocean with rod and reel to catch fish while drifting offshore. Without the benefit of boat or land, the fight is considered to be by the fisherman anyway, on more equal terms. Skishers swim sometimes hundreds of yards from shore to water well over their heads, with their flippers and buoyancy of their wetsuits keeping them afloat. Montauk is also credited as the birthplace of "skishing", a combination of fishing, swimming, and water skiing. 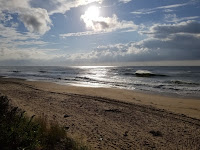 The beautiful weather stayed with us Friday afternoon as we explored the town, ate lunch at the Clam Bar and dinner at the Haroldson's rental home with other out-of-town guests.  Jeff and JJ hosted dinner serving homemade pasta carbonara, garlic bread and salad.  It was Cam's first taste of carbonara and now that he is aware of a recipe involving two of his favorites- spaghetti and bacon, he may be seeking it out at the next Italian restaurant outing.  Saturday brought more exploring to a state park and the town, perfect weather and an invitation to the rehearsal dinner held in the courtyard of a resort.  It was so relaxing to be in the grassy area just a short walk from the ocean.  Besides tasty burgers and hot dogs, homemade desserts and side dishes were in abundance. 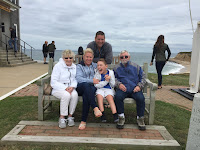 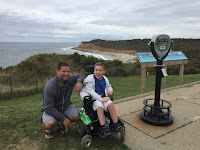 On Sunday, we headed off to find the lighthouse.  It was a bit cooler and cloudy, but rain never found its way to our area. 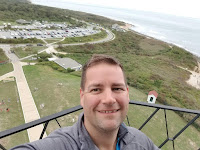 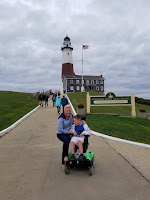 The Montauk Point Light was the first lighthouse in New York state and is the fourth oldest active lighthouse in the United States. Authorized by the Second Congress in 1792, under President George Washington. Construction began on June 7, 1796 and was completed on November 5, 1796.
There are over 137 iron steps to the top of the tower. The light flashes every 5 seconds and can be seen from a distance of 19 nautical miles. 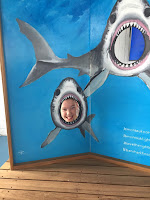 Chris was the only one from our group who made the arduous climb to the top.
A kids area allowed Cam to see what it was like to put his head inside of a shark. 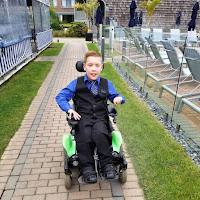 Of course, we hadn't traveled to Montauk just for sightseeing.  The reason we made the journey was for the wedding of cousin James to Ally.  The Sunday evening ceremony was set for 5:30pm outside at the Montauk Yacht Club.  The weather was quiet and calm and the atmosphere couldn't have been more relaxing.


We listened to James and Ally read their own personal vows to each other and be pronounced husband and wife.  Outside in the courtyard, we feasted on delicious appetizers and drinks. Besides immediate family, Aunt Betsy and Uncle Jon made the trek to Montauk as well as numerous cottage lifelong friends.  The three Haroldson sisters- Libby, Katie and Coco were beautiful bridesmaids. 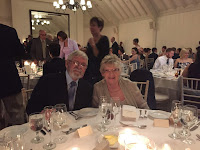 When we all settled into our assigned seats in the elegant reception area, Cam was very happy about two things- he was eating chicken fingers for dinner and they would be delivered to his place setting when the salads were set in front of the adults.  And his parents and grandparents were equally excited about their dinner choice of filet mignon or chilean sea bass. 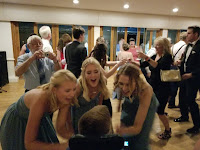 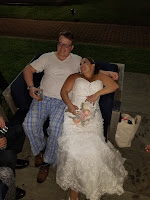 This is the first wedding Cam attended where there was a live band who played from 7pm - 11pm, without any breaks.  And our super sweet cousins, the Haroldson trio, made certain Cam saved a dance (or three) just for them! 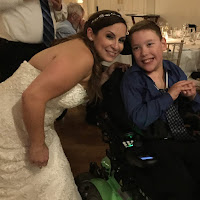 It appeared to us and quite a few others that our son was a bit smitten with the bride.  He also ended up ditching his vest and tie after all of that dancing!  Cam stayed up quite late for an internal clock that doesn't usually go past 9p and quickly fell fast asleep upon arrival at the Beachcomber. 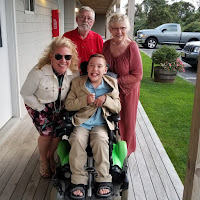 We visited the place known as "The End" due to its eastern most location, but how ironic that we were there to witness such a wonderful and loving Beginning :)

For the first time, Cam wore an actual suit jacket for the rehearsal dinner.  Jane couldn't believe how incredibly handsome (and grown-up!) her son was.