"You swing your best when you have the fewest things to think about." ~Bobby Jones 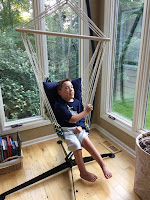 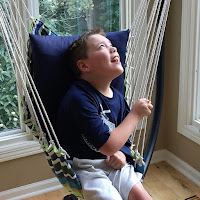 5th grade began for Cam on a very warm Monday, August 27th.  Super excited and wanting to get to the bus stop early, we missed our photo op moment.

Cam's parents gave him a hammock swing for his birthday.  It's the perfect size for the corner window.  Truth be told, Chris and Jane have been seen taking a turn as well.  For Cam, he's able to relax and enjoy the great outdoors from a nice vantage point inside.

After only 4 days of school, the Labor Day weekend was upon us and Friday and Monday were vacation days for our school district.  Miss Amanda wasn't student teaching on Friday either so she came by to hang out with Cam while Jane was working.  Amanda loves chickens and she brought over a stuffed chicken that was a gift from her boyfriend.  Cam said it was the biggest chicken he had ever seen! 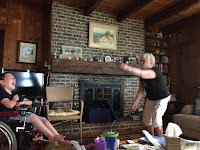 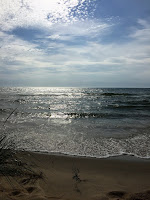 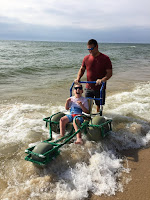 Per tradition, this time marks the end of summer and the best place to say goodbye to summer is at the cottage.  The weather wasn't cooperating too much and Sunday appeared to be our only day to potentially squeak out a visit to the beach.  After lunch, the cloudy weather was hanging on so we played some charades.  Oma is acting out the sport of...bowling.  Jane, Cam and his grandma had a hilarious time entertaining themselves and at some point, while they were laughing, the sun made an entrance.

The Lake Michigan water was actually warm and it was a bit wavy.  Sometimes, when September arrives, the temperatures cool considerably, but not just yet. 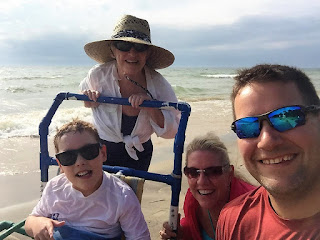 Chris and Cam completed some science experiments at the shoreline as they dug a hole and placed a plastic bottle upside down.  The force of the waves uncovering the bottle and gravity made it pop up out of sand.  We all thought it was pretty cool.
After a few hours on the beach, we headed back up to the cottage where we shared a steak (and homemade chicken tenders) dinner, complete with fresh Michigan corn on the cob and Oma's homemade apple pie for dessert.
We were thankful for the sunshine, swimming, and family time. 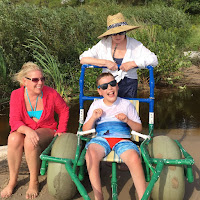 Cam said it best in his dinner prayer: "Thank you for this food and this day and Oma and Opa and being here and our family.  Amen!"

It's no secret that Cam is a bit doted on by his grandma. It seems that sometimes it's a bit too much of an expectation.
"I would like some Oma coffee cake, please."
Jane: "Cam- Oma doesn't always need to make coffee cake every time we visit."
(and of course, she actually did- Jane just hadn't seen it in the kitchen!!)
Posted by Special Moms at 8:50 AM