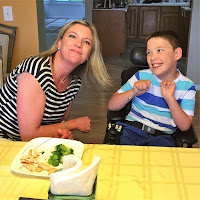 Life is busy...work, school, appointments, activities and all the rest.  It's tough to slow down sometimes.  But if you're able to and lucky enough to find some friends to relax with, try to enjoy the ride.

'Auntie' Leslie and Mr. Jay became a part of our everyday life this week.  Leslie encouraged Cam to eat solo and we engaged in strategic game play daily.  Camel Up (or is it Cup) proved to be one of Cam's favorites.  It is a game of options, decisions and luck.  Our gaming son even scored big and won a round.  The high-fives commenced and Cam was, well, a little excited. 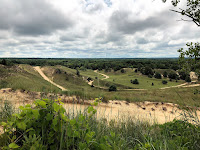 On Friday, a surprise was planned.  We talked about it during the week but did not reveal what it was.  Cam wanted to be really astounded and one of his many questions- "is it appropriate for me" had 'Auntie' Leslie retorting, "What?! You don't think I'm appropriate?"  When the big day arrived, we all piled into the van and headed southwest.  Duty called for Chris and as much as we begged, he had to go into work that day.  Our destination was the Saugatuck Dune Rides. 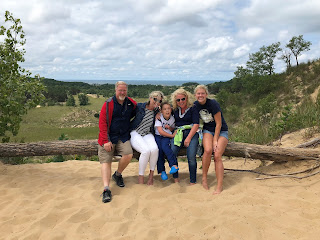 History: The dune rides date back to 1954 when Ron Jousma, then 21 and home from the Army, decided Saugatuck needed a dune ride similar to those at Silver Lake near Hart. He bought the present dune property west of Goshorn Lake from a Chicago man and turned his 1942 Ford convertible into a dune buggy with seats in the rumble seat. He added a 1946 and 1947 Ford coupe, cut off the tops, outfitted the cars with super-wide tires and cut trails in the dunes. 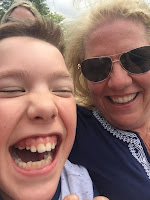 In 1961, Jousma and a friend picked up two half-ton Ford truck chassis and drove them back from Kansas City sitting on wooden boxes. They were outfitted with steel beds and seats and joined the fleet. Still later Dodge Power Wagons were added and equipped with aircraft tires to operate in the sand. In 1971 Jousma opened a dune ride in Great Sand Dunes National Monument, Colorado and operated both rides until selling them in 1978 to an Indiana family. In 1981, Linus and Janice Starring purchased the business. The two never had ridden on the schooners until they inspected them prior to purchasing the business. Saugatuck Dune Rides remains a part-time job for the Starring family. Linus, with a degree in heavy equipment, is a railroad engineer for two small freight lines in Michigan during the off-season. Janice manages the office and handles all booking and scheduling. Even as a part time business, there's plenty of maintenance to do. Shifting sands require daily grading of the trails in the dunes. Driving in sand dunes means the schooners need oil changes and engine maintenance every 100 miles. During the off season, equipment is fabricated and updated for the following season. 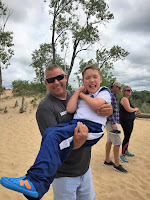 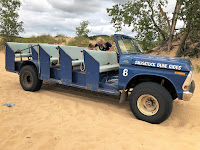 Cam had ridden the dune scooters about 4 years ago but didn't seem to really recall the ride.  He was all smiles and screams once we started out, though.  Our driver was Scott and he volunteered to carry Cam over to the log for a photo of our group!  The weather was perfect for the adventure- not too hot and not too cool.  It turned out to be an "awesome surprise" according to Cam!! 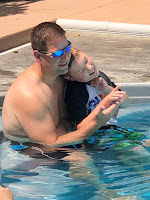 Saturday was a divide and conquer day.
Chris and Cam enjoyed a pool party at Mr. Brent's, a mutual friend of Jay, Leslie and Jane's.  Simultaneously, Jane headed north to attend a memorial service for Uncle Rod Jellema. 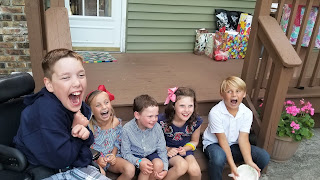 By early
evening the boys
met Jane at Stony Lake for a 50th wedding celebration of family friends, the Vincents.  At Stony Lake, Jane spent 7 summers caring for the Vincent kids and their cousins.  Now they all have kids of their own and the party was not only a fun festivity, but it was also a reunion.  More than 30 years ago, Jane had a picture with all of these 'older' kids so it was only fitting to snap one with the next gen crew.  You may be wondering why the younger set of kids is cracking up in the picture.  Well, they are all saying "farts!" 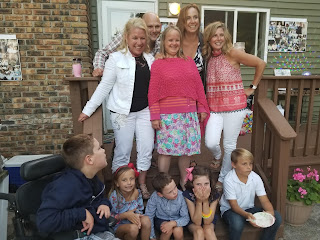 It just so happens that one of the early birthday presents Cam received from Auntie Leslie and Mr. Jay was a fart machine, complete with a remote control to make others think they may be experiencing a sudden bout of flatulence.  Let's just say it was a bit hit with the Stony Lake kids. 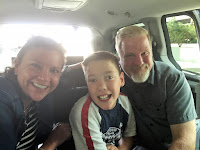 After a very late arrival back home, sleep came quickly and the morning too soon.  We drove Mr. Jay and Auntie Leslie to the airport and they showered Cam with more early birthday presents including a Pranklopedia book full of "not mean pranks" which Chris and Cam quickly began researching. 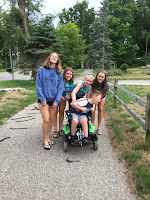 With each goodbye, we seem to say a hello.
Sunday evening we shared dinner with the Raisch family for the first time in quite a few weeks.  After a yummy meal, we headed out for our annual summer ice cream trek, less than a mile away.  The girls all surprised Cam on the way back with a tickle attack!

Camology Quotes:
If you're wondering what pure joy looks like, just watch this video!

(Quick clip and a little cut off)
"This is awesome! I am having so much fun!"
Posted by Special Moms at 5:40 PM