Look for the Helpers - Week of Apr. 30th

“When I was a boy and I would see scary things in the news, my mother would say to me, "Look for the helpers. You will always find people who are helping.” ~ Fred Rogers 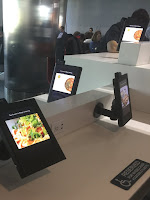 Cam is a planner, checking on schedules and events well before their time.  His thoughtfulness and caring soul always shine through.
Jane had to fly out to Oregon for work very early Monday morning.  Chris sent a text after her first flight..."Cam wanted to confirm his haircut is next Monday (he doesn't believe me) and he also wants to know if you had breakfast."  With a long morning of travel, the sweet message definitely brightened the day.
At a layover in Denver, it was encouraging to see a sign reserving an area for accessibility.  Cam was definitely excited to see the multitude of iPad's in an airport! 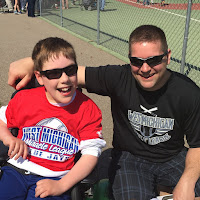 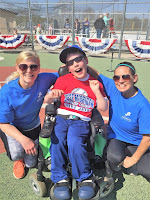 On Saturday, our favorite baseball player was ready to play ball with his WMML Toronto Blue Jays teammates.  The first game at 10am awakens the field.  We arrived a little early to meet the volunteers from JR Automation.  A helper named Kim found Cam and we immediately recognized her from last year!  She was so excited to see her buddy again and quickly asked if she could hang out with him.  Of course, Cam readily agreed. 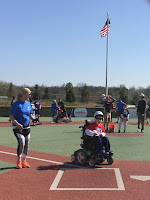 We recently learned that there is quite a long waiting list for organizations who want to sign up to assist with the WMML games.  It is humbling to know that so many are awaiting a chance to team up with this group of kids so happy to have the opportunity to be immersed in America's treasured pastime.
The bat box pulley system Cam benefits from to launch the ball is in full use this season with many more kids taking advantage.  As we watched our boy head into home plate, the 'Cam fans' (Oma and Opa, Chris & Jane) gave a rousing cheer!
After the game and a quick snack, we followed Cam's grandparents to the cottage.  The bathroom remodel project is nearing the end.

While Chris and Jane worked on installing grab bars in the shower and cleanup duty, Oma and Cam took to organizing a few drawers, separating piles into keep, giveaway, and toss.  Cam is a very effective organizer and always willing to be the best helper. 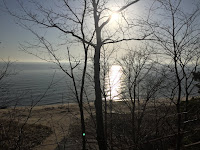 After sharing a delicious dinner, we were thankful for the progress made and the shrinking list of items.  Taking one last look at the sun, the Weatherford family took to the road once again and happily found their pillows not too much later after arriving home.

Camology Quotes:
As Cam and Miss Amanda were heading off to PT this week, Jane was talking about the arrival of Ms. Molly's baby, Ethan.  Amanda remarked that Cam's swim instructor, Ms. Laura, was also pregnant and Jane noted that Cam's hair stylist, Ms. Amelia was about to have a baby as well.  Not realizing Cam was acutely aware of the conversation, the listening ten-year-old remarked,
"It's that time of year!"
Posted by Special Moms at 7:16 PM