Blooming - Week of May 14th 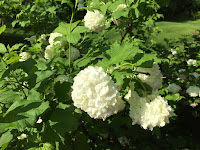 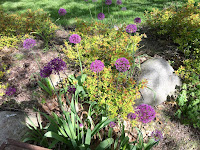 "Let us be grateful to people who make us happy, they are the charming gardeners who make our souls blossom." ~Marcel Proust

If you're lucky enough, you may witness or be a participant in the sweet growth of a friendship.  Cam's first and best friend, Emma, has been in his life since the beginning. 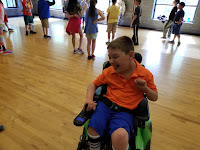 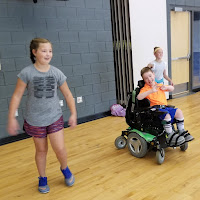 Throughout preschool and grade school, we've continued to watch classmates become buddies and remain a part of Cam's life.
On Friday, a fourth grade (only) field trip to the Fine Arts Center included multiple activities centered around the arts. Our ten-year-old participated in the dance movements, musical drums, and art creations.  Chris watched his son advance to a circle (without prompting) to show off some dance moves while all the kids chanted his name.  When Jane arrived to pick up Cam (for a work stint at Grand Valley), she was pleasantly surprised to see a sweet friend making certain Cam was able to exit an area without everyone crowding around.

Saturday morning began with a heavy duty rain shower, but that would not deter the West Michigan Miracle League.  We assured Cam his game wasn't cancelled and team pictures would take place afterwards.  As we headed to field with rain pattering on the windshield, Cam announced "well, this should be interesting!"

The Center for Physical Rehabilitation (where Cam receives PT) volunteers were in full force.  Two guys who came over to our ball player had actually met him before! 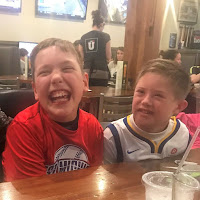 And the weather did not dampen our family Cam-fan travelers.  Oma, Opa, Uncle Joe, Aunt Joyce and cousin Annie all drove in to see Cam's game.  Many thanks for their steadfast support on a dreary weather day! 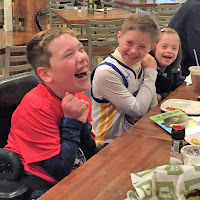 Immediately following baseball, Cam and his parents headed over to Uccello's restaurant in Rockford to celebrate Brody's 11th birthday. 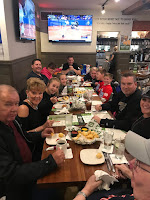 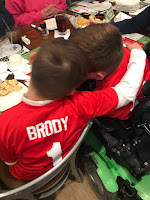 Dining on delicious pizza puffs to start the meal, was followed by a tasty lunch and topped off with strawberry shortcake and chocolate cake.

Brody asked two friends to join the festivities- classmates Cam and Evelyn readily agreed.
Evelyn thinks the boys are so nice and kept giving them hugs throughout lunch which had the baseball teammates cracking up.
These two guys have known each other since kindergarten and we predict the best buds will have a lifelong connection. 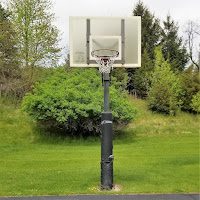 Friendship is to people what sunshine is to flowers...

This week, our family decided the old basketball hoop which we inherited with the home, could be put to better use elsewhere.  Chris placed an ad online indicating it was free.  To no one's surprise, many calls came in.  The only stipulation in the ad was that whoever came to retrieve it was completely responsible for its removal.  Once it was gone, Chris and his trusty supervisor, Cam worked to grind down the bolts left behind.   A few of our son's favorite new phrases include...
"Hello, Earth to Dad!"
"Hello, Earth to Mom, are you there?"
Posted by Special Moms at 8:55 PM