We are drawn to Santa Claus each year, even as adults.  One of the greatest gifts during the holiday season is seeing little faces light up at the sight of Santa.  A role model promoting giving, jolliness and good behavior is certainly something we could all use more of... 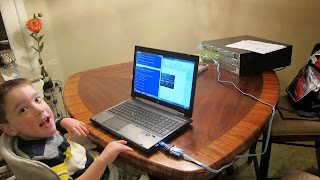 Before trekking off to see the white-bearded man, Cameron was busy with projects at home.  He is seen here assisting with a little configuration of a network router with Chris.  Maybe he'll be following his Dad into the computer science world! 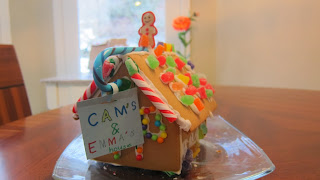 At the same kitchen table, Cam and Emma worked on a detailed project themselves.  They were quite content to make the gingerbread house their own, not trying to follow the picture on the box.  The personal touches made it picture perfect!  The sign out front let everyone know who the architects were. 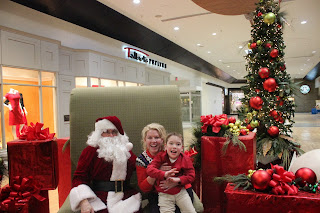 Last year, we made the customary trip to the local mall to purchase a photo op with Santa.  2013 was our first venture into taking our own pictures with jolly St. Nick, free of charge.
Emma and Cameron, Chris and Jane made it over to Breton Village (with most of Grand Rapids) where Mr. & Mrs. Claus were making an appearance for free picture taking.  It was quite a long wait, but the buddies were pretty patient.  Mrs. Claus showed Cam the sleigh bells used by the reindeer and even let him ring them.  Cameron told Santa he would like some books for Christmas.

Our local grocery store set up time during the week from 4-7pm in the cafe seating area in front of a fireplace.  We were the only ones there when we arrived and Cam had more time with Santa than he'd ever had before. 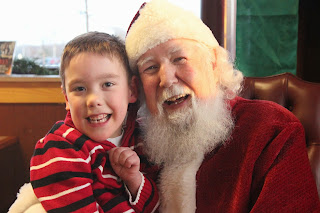 We are always amazed by people who give so much of themselves and their time to help others and this man not only volunteered, but gladly played the part.
He told Cam he was quite honored to meet him. Likewise, Santa, likewise.
Posted by Chris Weatherford at 3:33 PM

oh my gosh - those pics with Santa are just precious!!!!!