Living in Michigan, most folks assume we are guaranteed a white Christmas.  That isn't always the case, but this year, we were assured and confirmed for an abundance of snow! 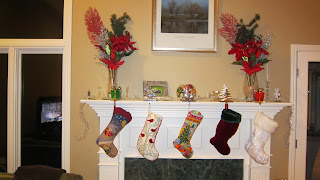 Oma and Opa drove to Cameron's house on Christmas Eve to stay for two nights.  Cam was totally excited!  He also embraced the story of Santa and the understanding that he wouldn't see the stockings filled until Christmas morning. 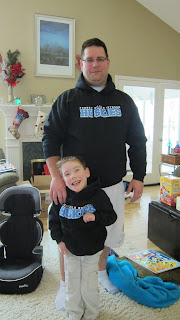 Of course, Cam was up bright and early, anticipating the celebration.  He did ask to help with the unwrapping of everyone's presents!  Some memorable moments included watching Oma see the unveiling of her yearly customized "Cam and Oma" calendar.  A tradition that began with Cam's great-grandmother has been passed on to Oma.  Another fun event - seeing the two handsome boys sporting their new Forest Hills Northern Huskies sweatshirts in honor of Cam's school.

A few days after Christmas, the parties continued when Cameron and his parents welcomed their aunts, uncles and cousins for the Jellema Family Party.

This year was a record attendance including 14 cousins under the age of 18.  The Family Party includes a visit from Santa!  The kids were all very good this year and received two presents each.  Quite a few even asked to sit on Santa's lap, including Cam.  The best question from the crowd of youngsters "can we tell Santa what we want for next year?" We explained that although the white-bearded man is extremely organized, it's probably best to write a letter. 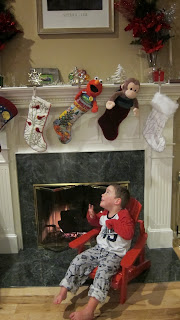 With a white Christmas came the invitation for lots of sledding, which the cousins enjoyed as well.

The week went by quickly and we are reminded of the magic of season, whether by the joy of seeing someone unwrap a gift or a child expressing exuberance regarding Santa Claus.

Hope your holidays were filled with the joy of giving, the gift of receiving, and the magical feeling of the season!

Posted by Chris Weatherford at 10:25 AM