"Gratitude unlocks the fullness of life. It turns what we have into enough, and more. It turns denial into acceptance, chaos to order, confusion to clarity. It can turn a meal into a feast, a house into a home, a stranger into a friend." ~Melody Beattie
Due to our blizzard conditions on Christmas Eve, we had rescheduled a gathering to Monday.  The Feast of the Seven Fishes which derives from the seven sacraments of the Catholic Church, celebrates the abstinence of meat until Christmas Day.  We had planned to partake in this tradition with the Haroldson/Bumphrey family and chose to still do so two days later.  There were far more than seven fishes and they were all delicious! On Tuesday, we said goodbye to Oma and Opa, thankful they were able to remain an extra day and most grateful for their gifts and staying with us over the holiday.  Even though the snow still blanketed the grassy areas, the roads were clear for driving.

Cam had time with Ms. Amanda for a couple of days while his parents completed some work tasks they both needed to attend to.  These two made a healthy chip dip, worked on activities and visited Amanda's pets.
Friday evening couldn't get here soon enough as we awaited the plane arrival from Arizona with Grandma Sue and granddaughter, Jalayna on board.  Their direct flight was only about 20 minutes late.
Chris picked up his mom and niece bringing them back to a house full of hugs and excitement.
As is typical, we attempt to pack as much fun as possible into our visits. 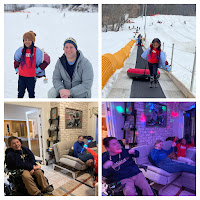 Saturday was New Year's Eve and first up was an outing for Cam's cousin Layna and her Uncle Chris.  They had a reservation for tubing at our local ski slope.  The "magic carpet" escalator takes you and your tube up the hill so you can easily jump on and make your way down. Back at the house, Grandma Sue, Cam and Jane enjoyed time to catch up on life and chat.
That evening, we decided to have a little dance party with our disco ball lighting up the room to the beat of the music.  Sparkling grape juice and snacks completed our celebration.  Although the U of M football game didn't go our way, the house was filled with giggles and screams hanging out together. 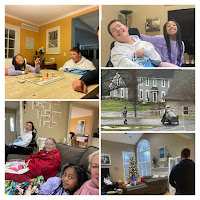 On New Year's Day, we had to keep the fun going.  Board games, puzzles and watching a movie were all on the January 1st list.  An old-time favorite is Candyland, which Layna won.  We watched the movie "Encanto" because Grandma Sue and Jane had never seen it.  The music was good and the film became a sing-a-long at one point.  After dinner, Cam, Layna and Chris bundled up to take the garbage down the long driveway for the next morning pickup. 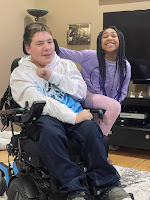 The two cousins make each other belly laugh by a simple gesture or remark.  Even though they officially met in person just a couple of years ago, it's easy to see they'll have a lifelong friendship...most of the time (we're quite certain) filled with the best giggles!

Sometimes a thank you is unprompted and unexpected.  There are times when Cam seems to be in tune as to when they are needed most.  When getting ready for bed one night, perhaps he noticed his parents were a bit tired from a long day of work.

"Thank you for always helping me.  I know you have to help me more than other kids and I really appreciate it.  I want you to know that."