"A balanced diet is a Christmas cookie in each hand."
The First Christmas Cookies
Those who would like to take credit for the invention of the Christmas cookie will have to arm wrestle the Germans for it. They believe that Weihnachtsplätzchen, a term that refers specifically to cookies and broadly to holiday treats, encompasses the origin of Christmas baking. The tradition goes back to the monasteries of the middle ages where monks had access to sugar and the spices we now associate with Christmas cookies: cinnamon, cloves, ginger, and cardamom. It’s interesting that the word “cookie” comes from the Dutch word “koeptje” because the Dutch brought the first Christmas cookies to the new world in the 1600s. Four hundred years later we live in a country that can’t imagine Christmas without cookies. In fact, cookies may have become popular at this time of year because, unlike pies and cakes, they can be stored for longer periods of time. Before refrigeration, it was possible for cookies to be baked in advance and kept on hand for visitors or given away as gifts. 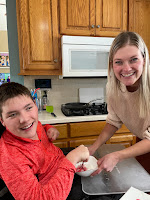 Modern Christmas Cookies
In the average American household at the beginning of the 20th century, sugar was a luxury, iceboxes were used to keep food cold, and cooking was done on coal or wood stoves. As the gas range was introduced, cookies became more sophisticated because temperatures could be precisely maintained. Refrigeration allowed for the use of chilled doughs. When the Great Depression of the 1930s ended, buttery, sugary cookies took America by storm. 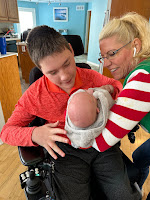 In preparation for the Christmas holiday, our cousins made their way to Grand Rapids on Wednesday for some holiday baking. Coco, Libby and Coco's kids Calla and baby Arthur arrived in the afternoon.  Amanda was hanging out with Cam and ready to join in.  This was the first time Cameron met his newest cousin, Arthur.  He is very excited to have a fellow boy cousin.  After frosting sugar cookies, dipping oreos in chocolate topped with andes mints, and baking peanut butter thumbprints with hershey kisses, we declared our afternoon a success! 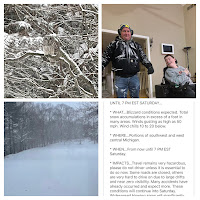 Everyone in our Grand Rapids area and along the surrounding lakeshore kicked their activities into high gear with a confirmed blizzard warning beginning Thursday at 4pm and lasting through Christmas Eve/Saturday at 7pm.
We were relieved to welcome Oma and Opa early in the afternoon on Thursday.
The snow machine began and didn't show any signs of stopping. 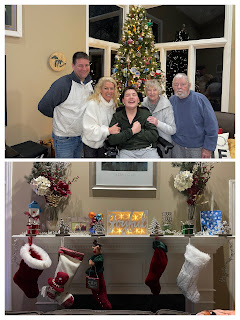 Chris went outside to snowplow twice daily.  A barely visible owl appeared in our treeline.

Our activities for both Friday and Saturday consisted of staying inside, gathering a few presents, cooking and choosing movies to watch.  Our theatrical list included the sequel to A Christmas Story entitled "A Christmas Story Christmas" as well as National Lampoon's Christmas Vacation and Noelle, a Disney movie.  Our dinner menus were comprised of salmon, flank steak and honeybaked ham.

Cam was acutely aware of the tasks needing to be accomplished on Christmas Eve- stockings to be hung, any presents still needing placement and a couple of surprises he had worked on with both of his parents individually.  He provided ongoing reminders throughout the day. 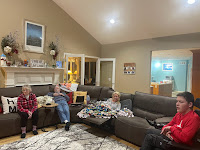 Cameron, as a 15-year-old, enjoys sleeping in on weekends and during school breaks.  Christmas morning was no exception.  Chris and Jane, along with their son, weren't awake until 8am.  Oma and Opa soon followed.  As we leisurely took our time with stockings and presents, it was joyful but serene.  The personalized gifts and experiences given were favorites.  The afternoon and evening was relaxing as we talked about the morning activities.  We all found ourselves in the living room enjoying a show.  Well, some of us (namely Opa) may have been so relaxed that the time incorporated a nap.  Even though the weather outside was truly frightful, inside our home was indeed delightful! 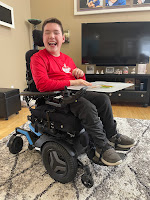 As our teenager continues to figure out life, he came upon an important life lesson.  Prior to Christmas, Cam was very happy creating a personalized water cup for his mom with Chris ("Love My Mom" inscribed) and choosing an experience for his dad with Jane (Muskegon Luge lesson).  During the day on Christmas Eve, Cam said to his mom.

"I'm so excited for you and dad to open your presents.  I think I like giving more than receiving!"
Posted by Special Moms at 6:46 AM