“Every picture tells a story. But sometimes it's hard to know what story is actually being told.” ~Anastasia Hollings
Without pictures, you would simply being reading words instead of seeing visuals in Cameron's blog. Steven Sasson invented the self-contained digital camera at Kodak in 1975. It weighed 8 pounds and had only 100 × 100 resolution (0.01 megapixels). The image was recorded onto a cassette tape and this process took 23 seconds. His camera took images in black-and-white and was the size of a toaster! 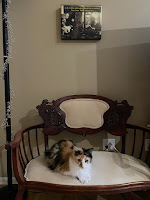 We recently found a picture dated 1903 of Jane's great grandmother sitting in a loveseat that was made by Jane's great great grandfather.  The loveseat is more than 120 years old!  It's been recovered and is now a favorite perch for our cat, Stella.  The original photo was scanned, uploaded to Walgreens and made into a canvas print where it is now displayed. This week we received our Christmas cards from Shutterfly and went to work sorting, stuffing and addressing.  It is a family tradition with an assembly line concept.
Each year, we have a mini photo shoot to use the pics in our cards. The Gaupers have taken our family pictures since 2014 and we always marvel at their ability to capture their subjects so well.  A sampling shown here is just a fraction of what they send with the release rights in addition to web size and full resolution, all digitally. 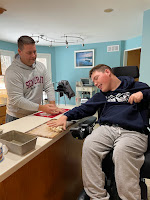 On Saturday, Chris and Jane were scheduled for two holiday parties and Ms. Ann had committed her afternoon and evening to hang out with Cam.
In the morning, Chris and son made two loaves of homemade bread in preparation for the afternoon gathering for the Lori's Voice board of directors holiday party.  Taste-testing followed and it was approved.
After Cam's parents left the late luncheon, they picked up dinner for Cam and Ann and arrived home before 5:30p. 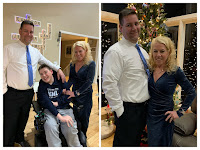 Following a quick wardrobe change, they were off again for the Fishbeck holiday party. Since Chris is the IT Director, the expectation was an on-time arrival and a later stay.
While the couple had a great time chatting with everyone and eating dinner, Cam and Ann watched the Beethoven dog movies and ranked them accordingly. 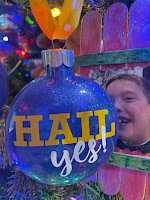 Sunday, we headed northward to bring lunch to Coco, Max and Calla.  It was a chilly day but toasty warm inside looking out at Lake Michigan.  We gifted our cousins the same new ornament we added to our own tree this year.  In honor of the University of Michigan Wolverines winning the Big 10 championship and headed to the Fiesta Bowl and hopefully, the National Championship, the handmade decoration seems very fitting. Go Blue!

In Cam's class at school, they were creating positive messages about their families and each other.  One of his classmates provided the following message: "You are great at not running us over" which made us all chuckle.  Cam wrote the following about his parents: