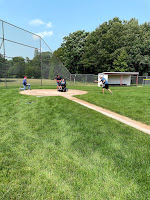 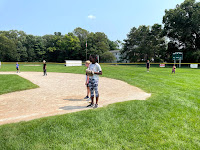 Home runs existed before outfield fences did. A player simply ran around the bases before the ball could be thrown home. Home runs became more special, though, when walls were built around ballfields in the late 1800s. (Historians can't pinpoint the date, as photos of ballparks then are scarce.) The fences were not to keep baseballs in, but to keep nonpaying spectators out. The National League was formed in 1876. That year, Ross Barnes of the Chicago White Stockings slugged the first big-league homer. Only 40 home runs total were hit in the 260 pro games played that year. (Part of the problem was that in parks with shallow fences, a baseball hit fair over a shallow fence was ruled a double.)
It was a weekend filled with literal home runs on the field and off... 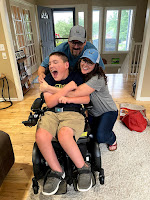 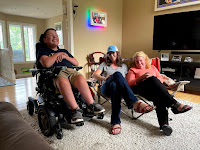 Friday early evening held a big surprise for Cam.  It had been two years since he had seen Auntie Roe.  Ronda lived with us over the course of a few years when Cam was younger and he frequently asks how she and her husband, Mike are doing.  Ronda celebrated a "big" birthday in July and it seemed appropriate to set up a get-together.  Through some last-minute secret planning, Ronda's husband didn't tell her they were driving to our house for dinner and we told Cam we were having friends over he may not remember.
The laughter and hugs didn't stop for quite awhile.  We had a great visit and upon our goodbyes, promised we would all make an effort to gather together more often.

Saturday morning we collected our materials for a couple of quick cottage projects.  A new mailbox was installed for Oma and Opa as well as a stable pole for the internet dish.  It was a quick stay at the lake and then we were off to the Annual Cousin Baseball game in Whitehall.  Cam's older cousin, Harper, is a great baseball player and showed off his home run skills at the ballpark. Harper's dad, cousin Dirk also hit a homer.  Cam rounded the bases a few times.  With a combination of young and older, it was a stellar

Thanks to cousin Coco calling ahead to Old Channel Inn, we were able to bring Cam into the restaurant via their portable ramp at the back door.  He was routed through the secret kitchen entrance.  We had all worked up an appetite and our growing son downed 4 perch and french fries, along with some tasty appetizers we all shared.  Cam's youngest cousin, baby Calla, was a total trooper hanging out with everyone all afternoon and evening.

Sunday was yet another day to look forward to as we prepared for our trip to Stony Lake, just north of the cottage.  Our Stony Lake crew dates back to before Cam's mom was born.  Jane's parents were good friends with the Huey family and Jane was a nanny for the grandkids during her teen years.  Now, the kids she babysat have their own kids.  We met Oma and Opa there and shared a delicious brunch.  Cam was given some early birthday presents and then we had homemade apple pie, compliments of Oma. 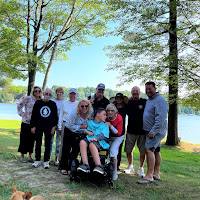 In the afternoon, we all made it into the boat and enjoyed a leisurely trip around the entire lake, hearing about its history and recent events.  Stony Lake is 278 acres in size and about 43 feet at its deepest point.  The warm breeze was the perfect compliment to the day. 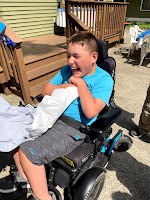 We packed a lot into the weekend and upon arrival home Sunday night, agreed that even though we were on the go, it was so awesome to reconnect with so many.

As we were headed to a different baseball field for the annual cousin game, there was no "address" provided, only directions.  Cam is very accustomed to using the GPS on our phones for all navigation. His response to our predicament was probably comparable to most other young teens. "What do you mean there is no address?  That is crazy!  How will it tell us to get there?"