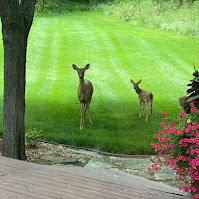 "Keep your face to the sunshine and you will never see the shadows." ~Helen Keller
"Summer afternoon—summer afternoon; to me those have always been the two most beautiful words in the English language." ~Henry James
We never tire of seeing the wildlife in our backyard.  Even after watching the deer almost daily, they look at us and we at them with interested curiosity.
Cam completed his second week of summer school enjoying the three-hour period for three days a week.  As the summer heat ramped up, Jane noticed that Cam was quite hot when he arrived home on Tuesday afternoon.  After a quick chat with the bus driver, she was told the bus didn't have air conditioning.  After indicating to the driver that Jane had had a script written some years ago to ensure a cool ride for Cam, she realized renewed action was needed.  It may seem a bit silly but the busses with a.c. do cost more to run.  After a few emails and phone calls, Jane had the script reinstated and the bus driver was so very thankful to be able to drive a bus with cool air.  The driver also shared with Cam's mom that the other kids on the bus were extremely grateful too. 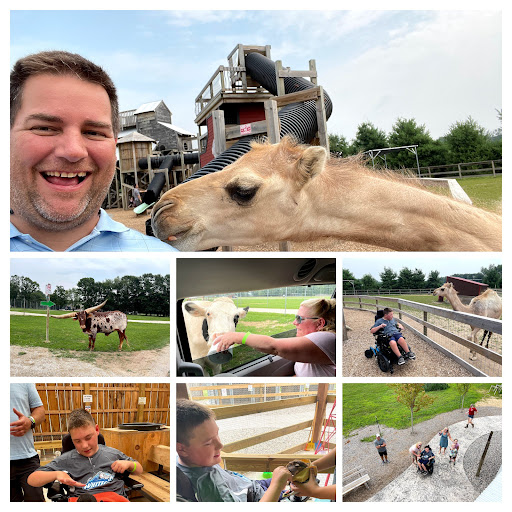 We welcomed the Holtz family once again on Friday.  We all thought a repeat of the June visit was in order and so we pre-scheduled another weekend of fun.  This time we thought ahead and determined that a Monday morning departure was a far better idea than Sunday.
On Saturday morning, the weather looked a bit suspect so after a recommendation from Cam, our entire crew loaded up into two vehicles to make our way to Deer Tracks Junction in Cedar Springs.  Our son had paid a visit to this location, but the rest of us were newbies.  We all loved the zoo portion where you're able to pet, hold and feed the animals.  After exploring the entire area, we were back in our vehicles to make our way into the drive-thru safari.  It is made quite clear that you are entering at your own risk as it relates to car damage.  After buying a bucket of pellets, we were off to view and offer the food purchased to the llamas, cows, deer, bison, yak, ostriches and the enormous, very impressive longhorn steer.  You're able to see bears but all windows must be up and feeding in that area is not allowed.  It was a most successful day and the remainder of time was spent playing Uno and Hedbanz, eating dinner and hanging out. 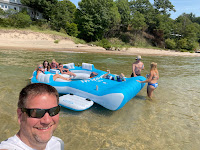 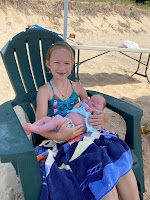 Sunday proved to be the nicest day of the week.  We arrived at the cottage to full sunshine and very small waves.  Jane cooked up three boxes of Kraft mac-n-cheese, a staple from childhood, for everyone to share for lunch.  Most of us settled in on the floating raft in between building sand castles and digging holes.  Sally found her calling as a top babysitter holding Calla and giving the newborn's mom a nice break.  Oma and Opa joined us beachside as well. 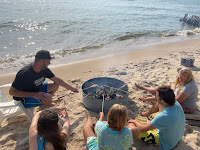 As the day moved into early evening, we built a campfire on the beach, ready to cook hot dogs with our cousins Coco & Max and Libby along with Molly and Jude, longtime cottage buddies.  It was our first beach fire of the season and it did not disappoint.  All of fixings and side dishes were in full array.  Immediately following dinner, it was time to cook up the best bonfire dessert in history, the s'more.  As we made our way back to Grand Rapids, the Holtz family was in the lead.  They sent Cam a video saying goodnight since they might not see him until the next morning.  Cam made a return video saying "Good night guys.  Love you!"  We can't make summer last forever, but the memories will stay with us and carry us through the chillier days in winter. 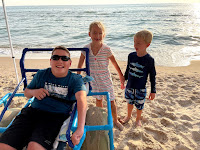 We were making homemade tacos with our friends for Saturday night dinner and Jane used a new seasoning she hadn't tried out before.  As everyone was debating who would taste-test first, Cam spoke up saying: "Ok, I'll take one for the team and try it!"

Such an informative post. Keep up the good work. Also look at this hire a minibus and driver. Thank you.