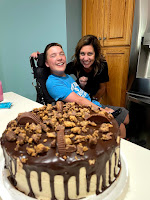 “Friends are those rare people who ask how we are and then wait to hear the answer.” ~ Ed Cunningham
"Life is partly what we make it, and partly what it is made by the friends we choose.” ~Tennessee Williams
It's funny what a small world it really is.  We marvel at the way friendships form, the connections we make and the strength of their longevity.  It was a week filled with friends who truly feel like family. 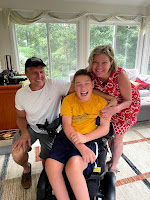 Ms. Mary is Ms. Amanda's mother-in-law.  A while back, Ms. Amanda brought over a few pieces of the most delicious homemade chocolate peanut butter cake we had ever tasted.  Amanda wanted to make the cake as an early surprise for Cam's birthday coming up.  Mary indicated it is a secret recipe so she baked it and surprised us all on Wednesday.  The crushed Reese's peanut butter cups on top make it extra tasty, according to Cam.
On Friday afternoon, Auntie Leslie and Wes arrived to stay with us for the weekend.  They drove from North Carolina and Wes had never been to the Great Lake state.  Leslie is Jane's first friend from the 4th grade and the two reconnected many years ago.  She couldn't believe how much Cam had grown since she hadn't seen him for two years. 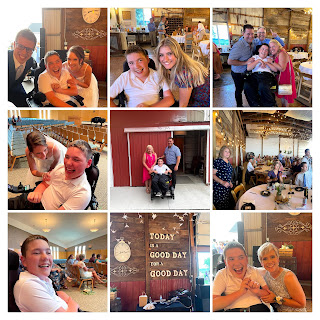 Saturday's lunch was at the GR Downtown Market where we all enjoyed lake perch and fries.
In the late afternoon, Chris, Jane and Cam were off to Anna's wedding while Leslie and Wes explored Grand Rapids. 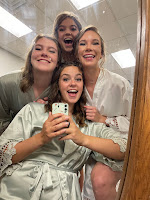 Anna was only four years old when Cam's parents moved in across the street from their family.  Cam wasn't even born yet.  We have watched Anna over the years experience joys and pain, all the while keeping her faith and positive attitude.  When she introduced us to Spencer, we all immediately felt a connection and could see why Anna was falling in love.
One of the most poignant parts of the wedding day for all of us was the sisters giving a speech for Anna and Spencer.  Each of them had a portion to say and it was heartfelt and heartwarming and funny.  These four sisters have always been close even though there is a span of 8 years between oldest and youngest.  In many ways, they have been like Cam's siblings too.  It was a beautiful day to witness one of Cam's lifelong friends begin a new chapter. 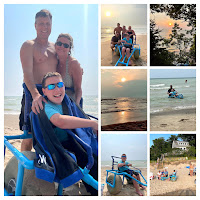 Sunday was our day for playing in Lake Michigan.  We arrived at the cottage in time to have a tasty salad and fruit on the deck for lunch.  Leslie grew up near the big lake and for Wes, it was better than the ocean.  It was too rough to be on the floating raft, but the water was a nice temp for swimming.  The remainder of the day was spent on the beach, playing in the waves and hanging out with cousins.  At dinnertime, we built a small fire by the water's edge and roasted hot dogs followed by scrumptious s'mores for dessert.  Cam said he felt badly that his youngest cousin, Calla, couldn't try the gooey marshmallow and melting chocolate mashed in between the graham crackers.  At just over one month, it will be awhile yet.  We headed back to Grand Rapids later that evening with full bellies and even fuller hearts after a weekend filled with such sweet goodness. 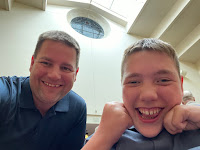 Cam's dad has a great sense of humor and is often joking with his son. At bedtime one evening Chris played a joke on his son and Cam had the following remark: "Oh, you are a very clever adult, you are.  Clever, clever Daddio."