Summer Cold - Week of May 31st After wearing masks for such a long period of time, Cam definitely stayed on the healthier side of life during this school year.  After a great deal of sneezing and coughing on Monday, it appeared that what was assumed were allergies may be in actuality, a full blown cold.  Dealing with sickness when the weather is so warm and inviting seems almost cruel.

Cam stayed home from school on Tuesday and attempted in-person Wednesday and Thursday but we picked him up both days after he felt crummy being there just an hour.  On Friday, though, he definitely rallied and made it through the entire day which included a pizza party to celebrate the last full-day of school. 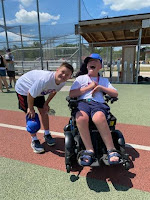 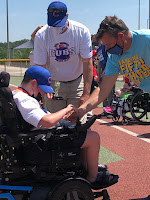 We were thankful for Cam's continued upswing because Saturday was a big day!  It was the last official baseball game for the WMML Spring season and the day was full of surprises.  A local bank, Fifth Third, generously provided a new videoboard for the West Michigan Miracle League field.  Each time a kiddo is up to bat, their "baseball card" is displayed on the board.  And yes, Fifth Third also donated a stack of baseball cards for every player on the team!  Our community is unbelievably supportive and the bonus trading cards with the kids pictures and stats were completely unexpected. 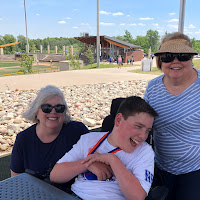 The Cam Fans were in full swing with Auntie Karen and her sister Sue making the long drive from the Chicago area to attend.  Ms. Barbara, Cam's K-2 teacher, arrived to cheer on Brody and Cam, her former students.  Oma and Opa met us there as well.  Following the exciting game, each player was presented with a medal and a trophy. 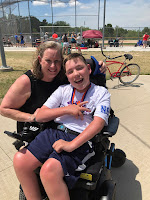 Afterwards, we set up a picnic over in the playground area.  Auntie Karen and Sue, Oma and Opa, Cam and his parents all gathered around a table to share fresh fruit, deviled eggs and an assortment of crackers and cheese.  Oma was sneaky and brought a delicious Ryke's birthday cake for Jane to have an early celebration.  After spending the afternoon together and sharing laughter and delicious food and scrumptious cake, we said goodbye to Auntie Karen and Sue and we were already making plans for the next visit. 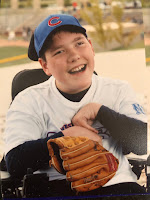 Back at home, we settled in for a relaxing evening watching a movie together, happy for Cam's grandparents extended stay.  On Sunday, Oma and Cam played checkers and games and we all shared a grilled dinner sitting at our new "used" dining room table.  The heavy marble tabletop was acquired from a neighborhood sale and perfect for Cam to drive right up and fit his chair under.  As the old saying goes, one person's trash is definitely another's treasure. 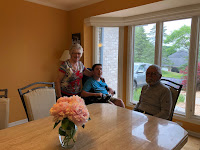 Chris and his buddy Steve had a big task transporting the heavy table and pedestal back to our home.  Extra padding was needed and Chris found old carpet remnants in our basement to use as protection for the stone top.  Cam, however, misunderstood what his dad had actually done.

"Mom, did Dad just rip up the carpeting in our basement to use it?!"
Posted by Special Moms at 6:37 PM