The nation’s first Father’s Day was celebrated on June 19, 1910, in the state of Washington. However, it was not until 1972—58 years after President Woodrow Wilson made Mother’s Day official—that the day honoring fathers became a nationwide holiday in the United States. 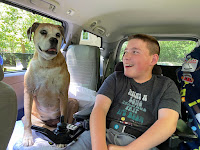 This was the first full week of summer vacation for Cam.  We also welcomed Miss Amanda back into our home for summer fun.  Amanda has spent many summers with Cam while his parents work and she has time off as a schoolteacher. 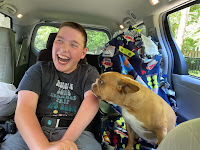 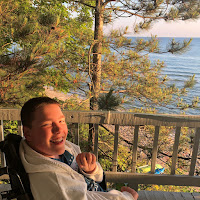 In addition to daily strolls with Miss Amanda, Cam helped out with an extra activity this week.  Amanda was dog sitting for a family nearby to watch a couple of tail-waggers, Roxy and Lola.  Cam and Amanda drove over to visit a few times during the day and decided to take the dogs for a car ride.  When they stopped to stay hi to Jane, Roxy was very protective of Cam and even growled a little when Jane walked back into the house.  Dogs seem to have a sixth sense when it comes to Cam and they sometimes gravitate toward him but also tend to guard and watch over him. 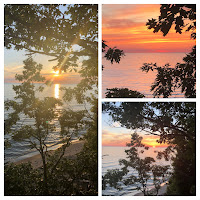 On Saturday after lunch, we drove to the cottage to spend the night with Oma and Opa.  The clouds remained throughout the afternoon, but the sun appeared in the early evening.  We enjoyed a delicious dinner with our cousins and Cam had one of his favorites, homemade pickles with hot dogs.

The sunset on Lake Michigan never disappoints and its journey towards the water leaves behind the most beautiful hues in the afterglow.  The night wasn't as restful as we had hoped, but we celebrated Chris and Opa on Father's Day.  In the morning, Cam's dad headed to the golf course with cousins Jeffrey and Max arriving back at the cottage after lunch.  Everyone hung out on the beach for a bit before the clouds arrived in the afternoon.  An early steak dinner on the deck complete with dessert rounded out our celebration before we packed up to head home.  Within 5 minutes on the highway, our son finally succumb to sleep.  About 20 minutes from home his eyes opened and we asked him if he had a good rest.  Cam's response: "What?  I wasn't sleeping.  Why does my neck hurt?"

At Miss Amanda's wedding in May, a very nice woman walked up to Cam and said hi.  She then told him he had been to her house.  Chris and Jane were extremely puzzled since they did not recognize this person at all.  The woman must have noticed the puzzling looks and told us all that she was Roxy and Lola's mom!

"Oh, I know Roxy and Lola and I have been to your house lots of times!  Nice to meet you!"
Posted by Special Moms at 7:45 PM