Family Connection - Week of May 17th 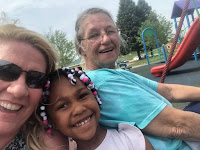 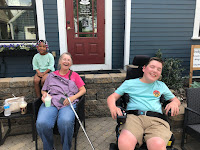 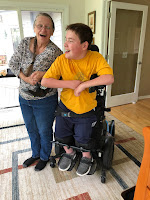 Cam attended school on Thursday and Friday while Jane took Jalayna (aka Layna) and Grandma Sue to the park.  Chris and his brother John explored GR and went downtown.  The cousins, Jane & Grandma Sue took a field trip over to Brody's Be Café and thoroughly enjoyed cold smoothies outside.  Layna loves to play games, just like Cam, and the two of them made certain that game play was on the daily agenda. 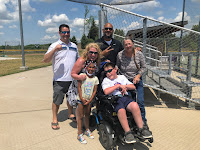 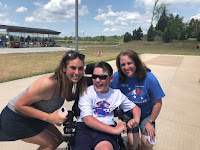 It seemed that all too soon, Saturday arrived and we embarked on our busiest fun-filled day together.  Seeing Cam play for the West Michigan Miracle League was a goal Grandma Sue has had ever since her grandson started playing.  And we soon learned that Chris' brother, John, was the loudest cheerer in the crowd!  In addition to our family group, Ms. Mary Jo and her mom, Kris also arrived to root for Cam.  Mary Jo has provided Cam care in the past and Kris was an aide for Cam's classroom in elementary school.  The game was so much fun as we all watched Cam successfully use the batter box twice and round the bases.  In the outfield, he was stationed at 3rd base. 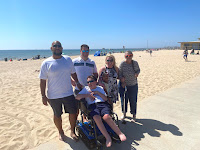 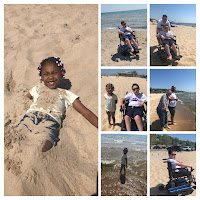 Immediately following baseball, our crew headed to Grand Haven State Park so that John and Layna could see Lake Michigan.  We made the trip in two vehicles with the brothers in one and Jane driving the cousins and Grandma Sue in the other.  During the car ride, the kids played "alphabet" finding letters on signs and calling them out.  It was quite busy and we had to wait in a long line of cars to enter the beach area but it was well worth it.  Chris was able to borrow/use the new trax beach power chair (donated by Lori's Voice) for Cam. For the very first time ever, he was able to drive himself in the sand.  Layna loved playing and strolling along next to her cousin, Cam.  Everyone got their toes wet and even though the water was quite chilly, the sunshine was so warm.  We were all struck by the similarities between Chris and his brother, John.  As we were leaving the state park, the duo noticed a car stuck in the sand.  Never passing up an opportunity to help others, they jumped out and between the two masterminds, figured out how to push the vehicle out of the gritty grip of the soft sand. 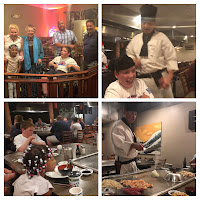 We arrived home in time to change and get ready for our special evening.  Once again we were off, headed to a hibachi dinner where your meal is cooked right in front of you.  Cam, Layna and Grandma Sue had never tasted hibachi before so we were all anticipating the event.  Chris' brother, John insisted on treating everyone.  The kids loved the onion "volcano" and the chef making a hat out of a cloth napkin.  Our bellies were completely stuffed but the cousins still had a bit of room for an ice cream dessert at home prior to bedtime. 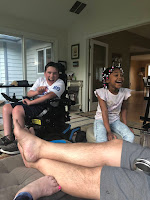 Sunday came too quickly and it was time to bid farewell to our Arizona family.  Not only did we find similarities between the brothers, there were also quite a few of the same likes and dislikes as it related to Cam and his cousin, Layna.  We all agreed that more frequent visits were in order and we all vowed to make it happen.  Some of us expected a return trip sooner than later...Miss Layna hugged everyone and said "I'll see you next weekend!"  Cam being the older cousin knew that we wouldn't see her in that short of time but on our return trip from airport drop-off, he made certain to ask "will they visit us for many, many more years?"  Even though Layna wasn't there to weigh in, we think she would've been proud to hear her cousin backing her up with a plea for frequent flyer miles.Camology Quotes:
Cam's parents have a bad habit of fastening their seatbelts as they are driving down the long driveway.  Cam in his role of safety supervisor is now instructing his parents when he catches them doing this.
"Safety measures must be taken.  Please fasten your seatbelts now!"
Posted by Special Moms at 9:21 AM