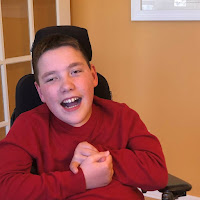 "We are all now connected by the internet, like neurons in a giant brain."  ~Stephen Hawking

Cam likes to ask his parents about 'the olden days.'  Chris and Jane always assume he is referring to the early 1900's when in actuality he is talking about when his own mom and dad were younger.  One evening he was asking what his parent's schooling was like in regards to looking up research information for reports and presentations.  We started to explain the library factor, the Dewey Decimal system, microfiche and all the other archaic ways of finding detailed info.  Cam was incredulous.  His response to all of this was, 'But how did you do school without the Internet?!'  It is funny to think that even when Cam's parents were 13 years of age, the access their son has today did not even exist for the general population. 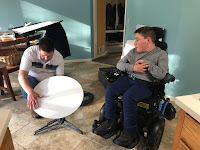 There were multiple technology projects this week.

Chris was finishing labs for a course he had taken and Cam never faltered with his daily reminder to complete.  He also worked right along side his dad which kept things interesting when Cam assisted with multiple choice questions and puzzling through a technical setup.

A new piece of equipment called a "Dishy" from Starlink arrived on Saturday to test out for faster internet access at Oma and Opa's cottage on Lake Michigan.  Starlink is a satellite internet constellation constructed by SpaceX providing satellite Internet access.  The constellation will consist of thousands of mass-produced small satellites in low Earth orbit (LEO), working in combination with ground transceivers.  The service is working to deploy almost 1600 satellites by 2022.  Father and son worked to configure and test.  After quite a bit of time, they had to put in a trouble ticket.  It was finally responded to with the indication that the satellite dish needed to be at its registered address- Oma and Opa's home, to even function.  Dishy testing status: Delayed.  Therefore, Cam was ready for his next project. 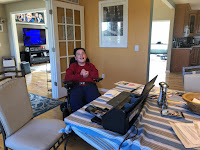 Jane and her best helper worked on a secret present for Mother's Day for Oma.  It took quite a bit of time, but Cam does not waiver when a project is in progress.  When his mom was having trouble accomplishing a portion, her son said to keep going.  By late afternoon on Sunday, completion was in sight.  Jane told Cam it would have never been finished had he not kept them both going. 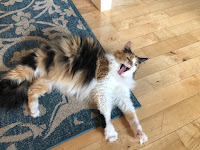 At the end of the weekend, with many items crossed off our list, we were all feeling a bit tired.  Even our cat, Stella, seemed to channel the mood of the family.  She produced a large yawn which actually looked like a bit of a roar!

Besides Chris, Jane also had some class training to attend to for her job.  She may have been procrastinating a bit and told Cam they could tackle it the next day.  Cam was ensuring there would be no excuses or further delays...
"Mom, you better get a lot of rest tonight because we are doing your classes and labs tomorrow."
Posted by Special Moms at 11:12 AM