“Becoming a grandmother is wonderful. One moment you’re just a mother. The next you are all-wise and prehistoric.” ~Pam Brown
“A grandmother once said that children are the investments and grandchildren the dividends.” ~Selma Berg

When Cameron was little and speech was still a bit out of reach, he called Jane's mom Oma.  After all of these years, the name has stuck even though he can clearly say Grandma now.  As a youngster, Oma was very protective of Cam and now that role has reversed.

This week, we welcomed Cam's grandparents for six days.  Jane's mom was scheduled for a parathyroidectomy very early Monday morning in Grand Rapids.  Cam's final instruction to his mom: "Take care of my Oma." 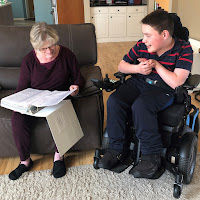 Upon arrival home from surgery day before dinner, his grandma was in good spirits and Cam requested a full report.  After understanding the medication and recovery routine, he made it his job to remind and check in as often as he could. 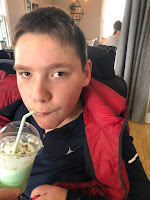 Since Cam officially began his spring break on Thursday, he had two full days at home with his grandparents.  Oma and her grandson looked through and read Jane's grandmother's biography.  It was written more than 15 years ago in collaboration with Cam's mom, grandma and great-grandmother.  Cam laughed at some of the old pictures and stories. 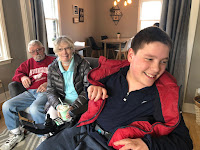 A trip to Brody's Be Café made for a tasty afternoon treat.  Both Cam and Oma tried the new mint shake which they both declared delicious!  Opa and Jane enjoyed their coffees and the relaxing atmosphere was a welcome change for everyone. 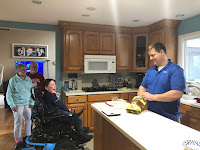 Grandson and grandma took some time to look through a Prankopedia book and with Jane's help they played a funny joke on Chris.  An almost empty potato chip bag was filled with whipped cream.  Cam convinced his dad to try a chip and he ended up with a handful of the dessert topping instead.

As we helped Oma and Opa pack up to head home on the weekend, Cam reminded her of her medicine and things to remember. 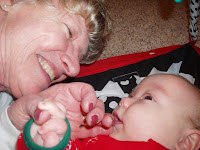 At any point over the last 13 years, if you were to happen upon Cam and his grandma together, most likely they would be laughing or smiling at each other, or deep in conversation.  It's so good to know someone is looking out for you and for Cam and his Oma, it seems that taking care of each other is an inherent part of their bond and always has been.

This week we were on a quest for a certain brand of frozen apples.  They were nowhere to be found.  In the news, the large barge was stuck in the Suez Canal blocking international goods traffic for many days.  Cam asked his mom about the apples again.
Cam, I've looked at our local stores and Oma has checked her stores too.  We cannot find them anywhere.
"Mom, do you think they are stuck on the barge in the canal?"
Posted by Special Moms at 7:52 PM