A Virtual Race to a Restaurant - Week of April 12th 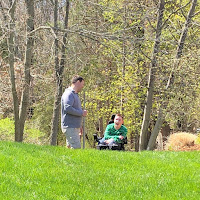 When people say 'kids grow up so fast' or 'you blink and they are teenagers' one doesn't imagine that it's how every parent feels.  In actuality, it seems it is completely true.  As Cam grows, his needs do as well.  The days of Jane lifting him solo are long gone.  A few years ago, the physical therapists who work with Cam recommended we begin the process to obtain an electric Hoyer lift through insurance.  It took some time, but when it arrived, we were all relieved to have this invention to assist us. 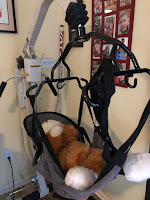 The Hoyer brand has been synonymous with lifts for 70 years. Ted Hoyer, an innovative quadriplegic, invented the first patient lift in 1951, a mechanism that is still considered to be the forerunner of all modern lifts.  On Thursday, Chris had an evening board meeting and knew he wouldn't be home prior to Cam's evening routine.  Jane and her son thought it would take a bit longer to get ready so they built in an 15 extra minutes.  Maneuvering the Hoyer and figuring out details was a bit trying.  Cam was not only patient but thinking of suggestions all along the way.  Due to them both remaining calm and chuckling at some missteps, it all worked quite nicely.  It may be difficult to imagine what a Hoyer looks like, so we put a large stuffed animal in to show the sling action. 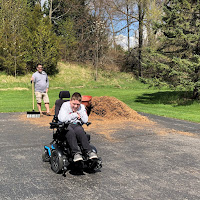 The weekend brought sunshine and milder temps.  A huge mound of mulch was delivered.  Father and son busied themselves for a good part of the weekend placing the mulch in piles over the flower beds and spreading it out.  The pile shown was three times the size when it arrived.

As the world continues adapting some in-person events, we signed up for the 25th Wheel Run 5K through Alternatives in Motion.  The "virtual" 5K did have its advantages.  We began the Wheel Run when it worked for our family which happened to be 4pm.  From our home, we ventured one street over to our former Windcrest neighborhood.  We stopped and chatted with many friends we know along the way and then began trekking through the Burton Nature Park. 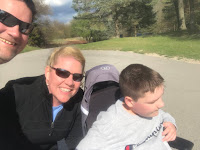 Upon entrance, we saw two pug dogs with a young family and a kiddo in a wagon.  Jane struck up a conversation about their pups and then mentioned how cute their daughter was.  The nice dad immediately said it was his son!  After apologies and friendly exchanges, we all continued on our way.  A couple of minutes later, Cam stopped driving, turned to his mom and said "Aren't you embarrassed?!  You thought it was a girl but it was a boy!"  And then, uncontrollable laughter ensued between Cam and his parents.  Every couple of minutes or so, Cam would stop driving and begin laughing all over again just thinking about it!  At 2.8 miles into our journey, we stopped to enjoy dinner at a local favorite, JT's Pizza.  It was the first time Cam had been inside a restaurant in over a year!  The remainder of our journey home enabled us to feel just a tad bit healthier as we all enjoyed a little exercise for a great cause after dining on pizza and cheesy breadsticks.😋

Jane didn't admit to her son that she was a bit nervous about using the Hoyer solo until they had completed the evening routine and he was tucked into bed.  At a critical moment during their finagling, Cam calmly and with an encouraging tone said the words Jane needed to hear most...
"I have faith in you, Mom."
Posted by Special Moms at 11:59 AM