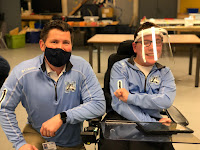 "To appreciate the beauty of a snowflake, it is necessary to stand out in the cold." ~Aristotle
Secretly, we think Cam was hoping that if he had to stay home from school due to inclement weather, virtual learning would be in order.  The district sent out communication indicating that a "snow day" would still be considered a day off of school. 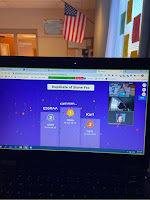 Early Tuesday morning, Cam woke up a little before 5a asking if he still had school.  His mom assured him he did.  Everyone fell back asleep.  At 5:15a, a text was received indicating school was canceled due to the snowy conditions.  Our son was able to sleep until almost 7am and Chris and Jane worked to rearrange some work meetings to be able to adjust.  After enjoying an entire 5 days of in-person learning last week, the weather thwarted that option this week.
Back at school, though, it was a stellar week.  Cam and his principal, Dr. Simpson, discovered they happened to be wearing the exact same shirt on Wednesday!  They were both representing their district, Forest Hills Northern with the Husky emblem.  Luckily, someone snapped a picture and Cam's teacher was excited to send it along.
Typically, the kids play an online quiz game called "Kahoot" driven by teacher questions about something they are studying.  Each student independently chooses their answers.  It is one of Cam's favorite activities.

At home, we marvel at the trust our cat, Stella, has in regards to Cam driving his power chair around the house.  Every evening, the same scene plays out.  Our son announces he is going to get ready for bed.   Stella is perched near the stairs, watching all of the action.  Cam starts his trek down the hallway and our feline doesn't move an inch.  Somehow, each of them has built this trusting bond without even realizing.
Without any skiing on the agenda for the weekend, it was time to catch up on home projects and tackle Cam's homework.  His assignment: create a "life skills" video showing an activity you complete on your own.  After much deliberation and a multitude of ideas, he settled on taking out the garbage.  This is actually no easy feat.  After the large garbage container is attached to the back of Cam's chair, he has to carefully drive down our incredibly long driveway.  He took his task very seriously and completed his video in one take!
Camology Quotes:
In Cam's room, there is a moon situated on the wall.  It has a remote control and lights up.  Ever since he was younger, Cam has given a "moon countdown" right before lights out at bedtime.  One night, his usual countdown of "5,4,3,2,1 go out" was replaced with "89312 go out".  Jane questioned why he used different numbers?
"I have software called Countdown Codes for Moon Time."
Posted by Special Moms at 9:59 AM